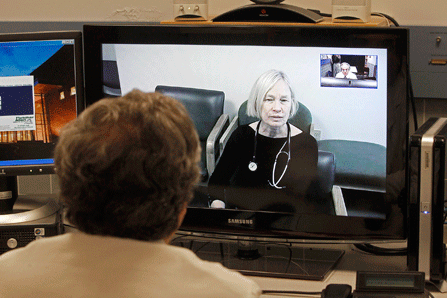 Psychiatrist Terry Rabinowitz consults with nurse Leslie Orelup at Helen Porter Nursing Home in Burlington, Vt. States are considering an interstate compact that would make it easier for doctors to practice telemedicine across state lines. (AP)

Demand for doctors – whether in person or via a computer screen – is expected to surge as millions more Americans become insured under the Affordable Care Act. About 10 million people already rely on telemedicine, often from doctors who live in another state.

As a result, more physicians are applying for medical licenses in multiple states – a costly and time-consuming proposition for some. Without a license to practice medicine in the patient's state of residence, both doctors and patients may be at legal risk.

Many states are embracing telemedicine by encouraging it in their Medicaid programs and requiring private insurers to pay for it. But they have made little progress in removing medical licensing barriers that proponents of the technology say have kept doctors and hospitals from expanding even more.

Telemedicine was once the purview of small town doctors who needed to consult with specialists available only in larger urban areas. Today, telemedicine technology is even being used to conduct surgeries using robotics, typically only in emergency situations such as during war.

Most telemedicine consists of video teleconferencing between a doctor and a patient. Doctors also routinely use telemedicine technology to transmit and discuss diagnostic images and to remotely monitor patients with chronic diseases so they don't have to leave their homes or nursing facilities.

For some consumers, it is the primary way they receive medical care. Using Skype on a computer or FaceTime on an iPhone, patients discuss their symptoms and show their doctors any visible evidence of their conditions, such as a swollen eye or skin rash. Patients most often conduct these consultations from home or their workplace. In some cases, patients go to a medical facility and use high-end, secure equipment to teleconference with a doctor in another location.

Much of the growth in telemedicine is expected to be in remote monitoring of patients with heart and lung diseases and diabetes, who have recently been discharged from a hospital. The aim is to detect health problems early enough to prevent them from being sent back to the hospital.

States have argued that easing licensing requirements could jeopardize patient safety. If doctors practice in a state without obtaining a license there, regulators maintain that they have no power to conduct an investigation or explore a consumer complaint. Also, these doctors would not benefit from any legal protections the state may have against malpractice lawsuits.

Proponents of telemedicine argue that since doctors take standardized national exams and most requirements are set by federal agencies such as the U.S. Department of Health and Human Services, states should recognize other state licenses. They say state medical boards are simply trying to shield doctors from out-of-state competition and preserve state revenues from licensing fees.

The cost to doctors of obtaining multiple licenses is estimated at $300 million a year, according to Gary Capistrant, public policy director at the American Telemedicine Association. That does not include the fees doctors pay for their primary licenses in their home states. For hospitals and medical practices that operate in multiple states, the burden of licensing limits the number of doctors who are willing to participate, he said.

Now, under pressure from major telecommunications and health care firms that want to create nationwide telemedicine businesses, state medical licensing boards are set to consider an “interstate medical licensure compact” that would give doctors and patients legal protections in any state that signs on. Patients would have greater protection than exists now, because states that join the compact would share data on any ongoing investigations of licensed doctors.

The proposal, to be considered at the annual meeting of the Federation of State Medical Boards in April, would expedite the licensing process for doctors who want to practice across state borders. Similar interstate compacts have been used for other types of licensing, including driver's licenses.

Even the most pro-telemedicine states have not yet taken a stand. The compact, which was developed by a task force of 22 state medical boards, may represent the first step. Lisa Robin, chief advocacy officer for the federation, expects there will be some early adopters. “I believe there will be some proliferation,” she said. “We'll see in April.”

The federation's compact is modeled on an agreement adopted by the National Council of State Boards of Nursing in 2000. That compact has been adopted by 24 states. Legislation is pending in Illinois, Massachusetts, Minnesota, New York and Oklahoma.

In addition to reimbursement and licensing, proponents say states need to define what types of telemedicine may be practiced, whether patients need to sign special consent forms and when doctors can prescribe medications remotely. Several state legislatures are considering those issues this year.

Since its beginnings in the mid-1980s, the number of patients cared for through telemedicine has risen from a few thousand to an estimated 10 million people in rural as well as urban settings. The vast majority of the growth has occurred in the last decade, according to the American Telemedicine Association.

Widely considered an effective way to reduce overall health care costs, increase patient access to care and improve overall health, telemedicine has broad support within state governments and Congress. At least five bills designed to further its use have bipartisan sponsorship in Congress.

“Until we are able to attract more physicians to rural communities and tighten the access gap,” one bill's sponsors wrote, “the next best alternative is to use technology to connect health professionals with underserved populations – rural and urban – through telehealth networks.”

Four of the bills under consideration would allow doctors who provide services under Medicare and TRICARE (the insurance plan for military personnel), and accompany sports teams when they travel from state to state to have just one state license. The U.S. Department of Veterans Affairs, a vigorous proponent of telemedicine, already considers a medical license in one state sufficient to provide services in all 50 states.

For soldiers returning from Iraq and Afghanistan, telemedicine is the primary way they've been receiving medical care already.

“We're fast becoming a 24/7 world,” said Capistrant. “People don't just get sick 9 to 5. Many work at night. For some, finding a doctor that speaks their language can be a problem. Technology can help deal with some of those issues and we should use it.”

The biggest issue at the federal level is that Medicare reimburses only for telemedicine services on a limited basis. To qualify, patients must meet a narrow definition of residing in a rural area, and even then the federal health plan for the elderly and disabled will pay for only certain types of services.

The other huge government health program, Medicaid, pays for a wide range of telemedicine procedures for the poor, according to the Center for Connected Health Policy, in all but Iowa, Massachusetts, New Hampshire, New Jersey and Rhode Island, where health care plans for the poor do not currently cover telemedicine services.

Only 21 states and the District of Columbia require private plans to cover telemedicine, despite strong support from employers who want to see the cost of premiums go down as telemedicine is used more often to keep people out of hospitals. An added benefit for employers is that telemedicine allows workers to receive care without taking time off from work to go to a doctor's office.