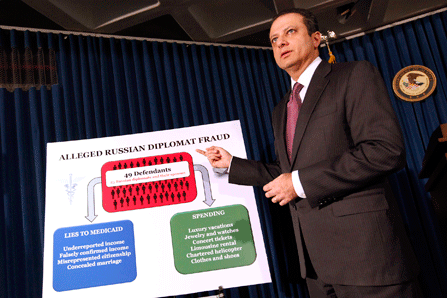 U.S. Attorney Preet Bharara announces Medicaid fraud charges against more than a dozen Russian diplomats and their spouses living in New York. The expansion of Medicaid under the Affordable Care Act has spurred states to redouble their anti-fraud efforts. (AP)

States are stepping up efforts to combat health care fraud and overpayments that cost them billions of dollars a year.

States are assigning special investigators, sharing information with each other and using new ways of looking at data to track improper coding and identify suspicious health care providers before they collect unauthorized cash from Medicaid, which is funded jointly by states and the federal government.

“It's always easier to stop it on the front end,” said state Sen. David Sanders, an Arkansas Republican who authored a law establishing a special inspector general for Medicaid fraud. “What you want to try to do is prevent waste, fraud and abuse from happening.”

The less palatable alternative, Sanders said, is the so-called “pay and chase mode” of trying to recoup improper payments after the fact.

The Affordable Care Act also takes aims at fraud and overpayments. The law centralizes claims data scattered across the Pentagon, the Department of Veterans Affairs and the Indian Health Service, among other agencies. It also requires states to stop payments to Medicaid providers when there is “credible evidence” of fraud, and mandates tighter screening of providers seeking Medicaid reimbursement.

The law also requires all states – even those not expanding Medicaid – to set up Recovery Audit Contractor programs to spot overpayments and recoup the money. Such efforts, the federal Centers for Medicare and Medicaid Services said, led to a drop in the billing error rate from 9 percent in fiscal year 2010 to 5.7 percent in 2013.

Nevertheless, Medicaid overpayments and fraud are still costing states and the federal government billions of dollars — about $13 billion in fiscal year 2013, according to a December report by the U.S. Department of Health and Human Services.

Individual audits and stings have exposed some egregious examples:

How states and the federal government split Medicaid funding varies among states, with the federal portion ranging from 50 percent to 73 percent. Since Medicaid comprises a quarter or more of most state budgets, states have a powerful incentive to make sure individuals and providers aren't getting improper payments.

Action in the Statehouses

In 2013, more than 100 bills designed to combat Medicaid fraud and abuse were introduced in state legislatures in at least 23 states, according to the National Conference of State Legislatures, and at least 35 of them became law. States also are fighting fraud in ways that don't require legislation, such as improving communication among state agencies, said NCSL's Megan Comlossy. Currently, 19 states are considering 45 bills related to controlling Medicaid fraud and errors, she said.

In Arkansas, Inspector General Jay Shue conducted 214 audits and reviews in the last six months of 2013, recouping $1.3 million. Shue said the very existence of the new post has had a deterrent effect, sending a strong message that the state will scrutinize the necessity of medical treatments and will punish fraud. “We want to change the mindset,'' Shue said.

In 2013, New York's inspector general recovered $851 million in erroneous and fraudulent Medicaid payments — more, the state contends, than any other state. The office uncovered a Medicaid fraud ring whose members, residents of an exclusive gated beachfront community, fabricated information on their Medicaid applications to bypass the income limits for eligibility. One person who claimed to be low-income drove a Porsche, an Aston Martin and a BMW.

The investigation led to six prosecutions by the Brooklyn District Attorney for welfare fraud, grand larceny and offering a false instrument for filing.

The New York inspector general also recouped more than $200 million from home health care providers who should have been billing Medicare, which is wholly federal, instead of Medicaid.

Other states are focusing on improving communication among state agencies and between states and federal authorities. In the past, states did not always compare data to see, for example, whether Medicaid was continuing to pay a provider cited for fraud by another government agency.

According to a Kaiser Family Foundation report, 14 states in fiscal 2013 and 20 states in fiscal 2014 took action to improve data sharing between public and private entities. Arkansas, Virginia and West Virginia told Kaiser they planned to participate in an all-payer claims database, which collects and analyzes data from all health insurance claims and can be used to spot suspicious trends in Medicaid claims.

A dozen more states, including Virginia, have implemented programs to share provider and claims data with a slew of other agencies, including the U.S. Department of Homeland Security and Immigration and Customs Enforcement, the Kaiser report said. Three states – Arkansas, Florida and Illinois – passed legislation in 2013 to improve collaboration or sharing of information to target Medicaid fraud, according to NCSL.

Texas, which decided against expanding Medicaid but is eager to control its spending on the program, has made big recoveries from pharmaceutical, medical device and other providers by working across state lines, said Bill Morrison, an attorney with the Dallas-based Haynes and Boone law firm and an expert on the state's anti-fraud efforts. “Texas really learned it could be profitable by getting involved in multi-state, joint state-federal actions,” he said.

The Power of Technology

Some states are using new technologies to identify bad actors, although some state legislators still aren't convinced that the services offered by software vendors are better than what Medicaid anti-fraud authorities are already doing, said NCSL's Comlossy.

Arkansas, Colorado, Massachusetts, Texas and Washington have enacted, and several other states are considering, new laws calling for investment in so-called “predictive modeling” software similar to what credit card companies use to reveal patterns of illegal activity, according to NCSL.

Simpler technology, such as using GPS to verify visits by home health care workers, can also add up to a lot of savings for states, said Scott Hermann, director of mobile solutions at Procura. Tennessee uses an electronic visit verification system, and Texas is considering one, Hermann said.

Citizens have helped uncover Medicaid fraud in the 30 states that have their own versions of the federal False Claims Act, which protects whistleblowers and rewards them for producing evidence, said Pat Burns, co-director of the Taxpayers Against Fraud Education Fund. The group cannot say exactly how much has been collected because of the laws, but estimates that about $1.3 billion was collected in civil fines in state cases in 2012 for all health care fraud.

“If you think of fraud as the disease, the False Claims Acts are an antibiotic,” Burns said.

And since not all overpayments are the result of deliberate fraud or theft, New York and Arkansas have imposed mandatory programs that teach Medicaid providers how to comply with complicated coding and eligibility laws. Even a small clerical or coding mistake can add up month after month for big hospitals, which may have hundreds of millions of dollars a month in Medicaid business, said a spokeswoman for the New York State Office of the Medicaid Inspector General.

“New York is basically spending a billion dollars a week on Medicaid, so the paperwork alone can lead to (expensive) screw-ups,” said state Sen. Kemp Hannon, a Republican who has been active in Medicaid reform.