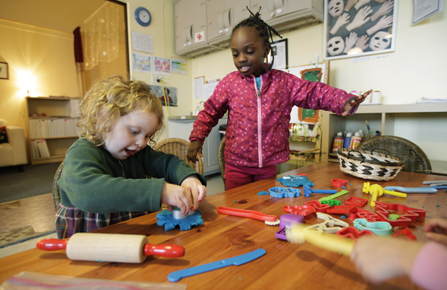 Preschool students play at Seattle's Refugee and Immigrant Family Center. Seattle is among a number of cities and states across the country working on expanding publicly funded preschool. (AP)

President Barack Obama, lawmakers and local officials from both sides of the aisle agree on the benefits of prekindergarten — the catch is how to pay for it. That is especially true of the “high-quality” programs critical to achieving the long-term benefits touted by advocates, such as lower school dropout rates, reduced costs to the criminal justice system and higher wages.

Some critics argue the benefits of preschool are overstated or fade over time, or that the programs are too expensive to justify the expense. But many lawmakers find the research showing that investing in early childhood education can yield large dividends compelling.

“What I learned is you can pay early or you can pay late,” said Tim Burgess, a member of the Seattle City Council who is leading an effort to make preschool available to the city's 3- and 4-year-olds. “Our argument is, ‘Let's invest early and reap huge dividends not only for the child and the family but to the city as a whole.'”

Burgess cited a recent multi-decade evaluation of 84 preschool programs, which found that on average, children gained about a third of a year of additional learning in language, reading and math skills. Other studies have found that large-scale public preschool programs in Tulsa and Boston produced positive academic results.

Other studies, most famously the Perry Preschool Project, have shown that positive preschool effects, such as higher graduation rates, higher incomes and lower rates of criminal activity, persist even after academic benefits may diminish.

Nationwide, enrollment in publicly funded preschool has exploded over the past decade. From the 2001-2002 school year to 2011-2012, the percentage of 4-year-olds enrolled in state-funded preschool increased from 14 percent to 28 percent, according to The National Institute for Early Education Research (NIEER) at Rutgers University, although enrollment stalled in 2011-2012.

While state spending on preschool has also increased, from $3.47 billion to $5.12 billion over the same decade, the dollars have not kept pace with enrollment, according to NIEER, causing per-child spending to drop by more than 23 percent, adjusting for inflation.

Many Ways to Pay

In most states, prekindergarten falls outside of the funding formula used to determine K-12 funding, making it more susceptible to economic downturns and fluctuating political support. Oklahoma, West Virginia and Wisconsin, all of which have high enrollment in publicly funded preschool, are among the exceptions and budget for preschool using the same formula as for their K-12 funding.

Some states, including Georgia, North Carolina and Tennessee, use lottery revenues to support preschool.

Obama wants to pay for his plan to provide preschool to 4-year-olds by increasing the federal tax on cigarettes from $1.01 to $1.95 per pack. While the idea has made little progress since he first proposed it in his State of the Union address last year, it has helped fuel a national dialogue about expanding access to preschool and inspired legislation to create federal-state partnerships to support prekindergarten for children from low- and moderate-income households.

Nationwide, cities and states are looking at a number of options for expanding publicly funded preschool:

Some efforts have failed:

Tim Bartik, a senior economist at the Upjohn Institute for Employment Research, a nonprofit organization based in Kalamazoo, Mich., said some cities and business groups are backing preschool as a way to boost local economies. “Tax breaks seem expensive, seem to escalate and don't necessarily have a lot of bang for the buck,” Bartik said. “One alternative is to try to create jobs more indirectly by enhancing the quality of the labor supply. “

Still, Bartik said that preschool can be a tough sell for lawmakers because the benefits take years to materialize.

“Most studies conclude that at some point ranging from between 10 to 40 years down the road, these programs essentially pay for themselves,” Bartik said. “The fiscal challenge is they don't pay for themselves within the first five years. Certainly, it takes you longer than that to get to a break-even point.”

While states have led the expansion of public preschool over the past decade, a number of cities are now jumping into the mix, in some cases because states have not moved as quickly as the cities would like.

In 1998, New York became one of the first states to set a goal of universal prekindergarten. But a lack of funding has limited progress, prompting de Blasio to forge ahead.

Another mayor taking the lead on pre-K is San Antonio's Julian Castro, who in 2012 persuaded voters to approve an eighth of a cent sales tax increase to expand preschool to more than 22,000 4-year-olds over the next eight years.

Castro has said his campaign to voters emphasized the importance of a well-educated workforce for the future economic growth of the city, which helped to get the city's business community on board. To win over frugal taxpayers, city officials calculated the tax would cost the median household only $7.81 per year. By reserving 10 percent of the preschool slots for families who earn too much to qualify for free tuition, the program earned broader political support. Finally, requiring the involvement of parents whose children attend the preschools helped counter critics who argued parents should be doing more.

In Seattle, while city officials are still working out the details, the city council may provide preschool free to 3- and 4-year-olds in households earning less than 200 percent of the federal poverty level, or about $47,000 in 2013. Higher-income households would pay fees based on a sliding scale.

Burgess said the city is looking at several options for funding, but expects it will ask voters to approve a special tax in a ballot measure.

“That sounds almost too good to be true,” he said. “That's why the rigor of implementation following the evidence is so important.”