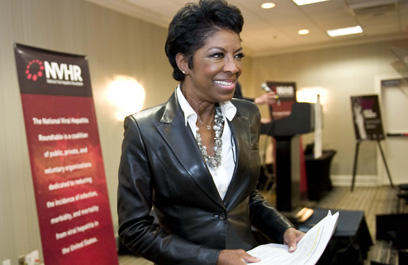 Grammy-winning singer Natalie Cole shares her experience about living with chronic hepatitis C. Two new drugs have been approved to help millions of Americans who suffer from hepatitis C, but both are extremely expensive. (AP)

Two new medications to treat the deadly epidemic of hepatitis C promise millions of Americans a better chance of a cure, shorter periods of treatment and fewer side effects than older drugs. They also threaten to bust state budgets and raise private insurance rates.

The new hepatitis C medications present a dilemma for Medicaid and other insurers, who must balance the cost against the huge number of people who could benefit from the treatment. A course of treatment costs between $84,000 and $168,000 -- or $1,000 to $2,000 per pill.

More people now die of hepatitis C than HIV/AIDS, according to the U.S. Centers for Disease Control and Prevention (CDC).The infectious disease can lead to scarring of the liver, cirrhosis, liver cancer, liver failure and death. For some sufferers, the only option for survival is a liver transplant.

The new drugs—simeprevir (sold as Olysio by Janssen Therapeutics, a division of Johnson & Johnson) and sofosbuvir (marketed as Sovaldi by Gilead Sciences)—could stamp out the disease, which afflicts an estimated 3.2 million to 5.2 million Americans. In clinical trials, the new drugs, which have already reached the market, have reached cure rates as high as 95 percent. Patients take them by pill, usually every day for 12 weeks, and they have mild side effects.

Until now, the drug of choice for treating hepatitis C was interferon. But patients typically must be injected with interferon for nearly a year, and it can have severe side effects including flu-like symptoms, fatigue, anemia, and depression. It also isn't all that effective, with a 45 percent cure rate for those with hepatitis C, genotype 1, the most common strain.

The Food and Drug Administration (FDA) approved the two medications late last year, after states had already completed their Medicaid budgets. It was no secret that the drugs were coming—patients were eagerly awaiting their approval. It wasn't clear, however, just how expensive they would be. By comparison, treatment with interferon or other drugs costs $15,000 to $20,000. Many patients have declined those treatments in anticipation of simeprevir and sofosbuvir hitting the market.

“I don't recall any other situation in which we've had very effective, very expensive drugs come out for an important condition with such a large patient population potentially eligible for treatment,” said Steven Pearson, president of the Institute for Clinical & Economic Review. ICER is convening the California Technology Assessment Forum of scholars, policymakers and insurers later this month in San Francisco to consider the clinical and policy ramifications of the new hepatitis C drugs.

The potential cost of treating even a fraction of those with the disease is nothing short of astronomical.

ICER's preliminary study estimates that in California alone, treating just half of all those with chronic hepatitis C with the new medications would cost an additional $18 billion this year, compared to what is being spent now. Because the prevalence of hepatitis C is about two times higher among Medicaid beneficiaries than the general population, a disproportionate share of the financial burden of these drugs could fall on the states and the federal government, which jointly finance Medicaid.

“If you do back-of-the envelope calculations, it's clear budgets couldn't take on the potential of every eligible patient,” said Pearson.

One of the drugmakers, Janssen, defended the pricetag. "We think the price reflects the value that Olysio brings to patients, medical providers and health care systems," spokesman Craig Stoltz said.

Matt Salo, executive director of the National Association of State Medicaid Directors, said it's likely the new hepatitis C medications will be part of a new wave of extremely expensive, complex, and finely tuned “specialty” medications that will create continuing dilemmas for the health care system.

“I don't know that public policy has yet come up with how we are going to deal with this,” Salo said. “If a cure comes out for lupus and it costs $300,000 a year, at what point do we say, ‘We can't do this for everybody?' Those are big policy questions we're going to have to start to grapple with.”

In the case of the new hepatitis C medications, the grappling starts in earnest at ICER's San Francisco conference. The group may issue recommendations on which privately insured and Medicaid patients should be approved for the new medications first. For example, it could advise that only those patients showing signs of cirrhosis should receive the new drugs, and that the remainder could use the old medications or wait for the next generation of hepatitis C drugs to reach the market, presumably at lower cost.

If there is rationing of the new drugs, it won't be an easy sell to patients, many of whom have lived with liver disease for years and some of whom could not tolerate the old treatments.

“Are you going to say to patients, ‘We understand you have a viral infection and there's a cure, but because you are in a mild stage, we don't think you need treatment now?'” said Mark Sulkowski, an infectious disease specialist and professor of medicine at Johns Hopkins School of Medicine.

The high cost of the drugs also raises concerns over how they will be dispensed. Does it make sense to hand over to patients a bottle of pills worth at least $84,000? Will there be a black market for the drugs? And what happens if a patient stops taking the medications before the end of treatment? Should they get to resume another full course of treatment?

Hepatitis C on the Rise

No one yet knows how strong demand for the new drugs will actually be. But the number of eligible patients could soar. Asymptomatic until advanced stages, hepatitis C can go undetected for years, often decades, and it is estimated that least half of the people with the disease do not know they have it. Today, it is often spread by blood-to-blood contact associated with intravenous drug use. But in the past, people often contracted it through blood transfusions and transplants.

Last year, the CDC and the U.S. Preventive Services Task Force both came out with a new recommendation that all baby boomers – everyone born between 1945 and 1965—be screened for hepatitis C. For unknown reasons, researchers have found a greater prevalence of hepatitis C in that population than others. Additional screening will only increase demand for treatment.

The potential costs of these drugs could overwhelm the Medicaid agencies, forcing them to turn to their legislatures for additional money.

“This is going to fall on taxpayers because we think it will fall disproportionally on those in Medicaid,” said J. Mario Molina, chief executive of Molina Healthcare Inc., a Medicaid managed care plan with 2.1 million beneficiaries in California.

Mike Wofford, chief of pharmacy policy with the California Department of Health Care Services, said it is possible his agency would have to ask the legislature for help. “If a budget breaker comes along we have to figure out how to pay for it,” he said. But he also noted that it's too soon to know if events are heading in that direction because of uncertainty over demand. Already, though, California Medicaid is requiring that patients obtain prior authorization if they want the new hepatitis C drugs.

Private insurers also are grappling with the implications of the new drugs. Susan Pisano, a spokesperson for America's Health Insurance Plans, said “There's always the potential that a high level of new costs to the system can have an impact on premiums.”

Drug companies currently are free to set prices based on market demand, but Pisano suggested that drug pricing deserves more scrutiny, particularly since more specialty drugs are in the pipeline, including new treatments for hepatitis C. “Heretofore there's been great focus on insurance but little focus on what the pharmaceutical companies are charging,” she said.

The two drugmakers are not likely to have the market to themselves for long. A new generation of hepatitis C drugs is expected to win approval later this year. That increased competition could drive down prices. Or, if the drugs are deemed even more effective, it could lead to more sticker shock.