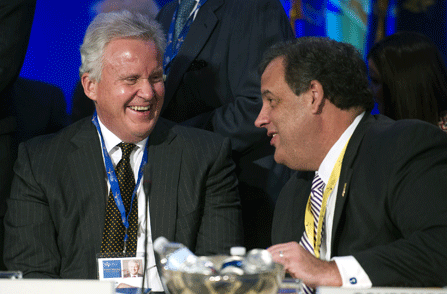 Yet on this winter Sunday at a Washington hotel two blocks from the White House, Republican Gov. Robert Bentley of Alabama and Democratic Gov. Peter Shumlin of Vermont were in harmony: Prescription drug and heroin abuse is an urgent national problem driving up state treatment and corrections costs.

“There's no question in my mind this is a challenge facing every state,” Shumlin said. A physician, Bentley said doctors who overprescribe opiates “should have their license taken away.”

The governors' unity demonstrates how the chief executives of the 50 states often drop their partisan differences to deal with issues they all confront. Contrast that with Congress, the governors say, which is often unable to tackle the nation's challenges because lawmakers put politics first. “They'd rather talk about Benghazi than job creation,” said Nebraska Gov. David Heineman, a Republican. “If you got 10 of us governors together in a room we could solve problems.”

To be sure, there were moments of partisan squabbling between Republican and Democratic governors at their annual meeting in Washington. Support for raising the minimum wage, for example, generally broke down along party lines, with Democrats backing Obama's call for an increase. But the governors attempted to be collegial, hoping to leave town with new ideas to address problems in their states.

Here are some of the other key takeaways from the recent National Governors Association meeting:

The governors heard the chairman and chief executive officer of General Electric Co. sketch a global picture of the economy and offer suggestions for creating jobs. GE is one of the nation's largest employers, with 135,000 employees in 200 factories around the U.S.

If a state wants to compete with other countries and grow its manufacturing economy, said GE's Jeffrey Immelt, it should turn out more engineers and welders. States should leverage high schools and community colleges to train welders while inducing their university systems to produce engineers, Immelt said. At all levels, states should stress an education curriculum including science, technology and math.

“If I go to a state and the governor can describe how many welders they prepare each year, that's a good thing,” Immelt said. “That means (a company like GE) can step into a manufacturing base that is incredibly ready.”

Five years ago, he said, the president of Vietnam told Immelt the country could produce 5,000 welders a year. As a result, GE built a plant in Hai Phong that employs over 500 workers making wind turbine generators. “It's an awesome workforce,” Immelt said.

Wisconsin Gov. Scott Walker, a Republican, said the state has increased funding to train young people in manufacturing, construction and customer service. Still, he said, a lack of respect for the value some of those jobs makes it difficult to attract young people.

“Help us spread the message,” Walker said to Immelt, “We should be just as proud of our sons and daughters to choose to be high-skilled welders as we do those who choose to be attorneys or doctors.”

As commanders-in-chief of their National Guard units, governors have a special affection for the state-based volunteer reserve force best known for its response to emergencies, but in recent years admired for helping fight in Iraq and Afghanistan.

Missouri Gov. Jay Nixon relied on the guard during the 2011 Joplin tornado, which killed 158 people and was the costliest twister in U.S. history. As recently as this month, he sent 500 guard personnel to Afghanistan. “We've all had to mobilize in our local communities. We also, each of us, have deployed as well as been to funerals of our citizen-soldiers,” said Nixon, a Democrat.

Nixon grew up 30 miles from the Missouri hometown of the general who oversees the National Guard, Frank Grass. With the adjutant generals of every state sitting behind him, Grass appeared before a governors' homeland security panel that Nixon chairs. The governors pleaded with the president and Pentagon officials to spare the Army National Guard from proposed deep cuts to the military budget as the nation makes a transition from fighting two wars since 2011. Obama's budget is scheduled to be released March 4.

As part of an overall plan to downsize the military, Defense Secretary Chuck Hagel has proposed trimming the Army National Guard from 355,000 soldiers to 335,000 by 2017. At meetings with the governors, Obama and Pentagon officials did not say they would save the guard from the reductions. Vice President Joe Biden did offer to meet with Iowa Gov. Terry Branstad, a Republican, who's been out front on the issue. Iowa could lose up to 648 of its 7,200 soldiers if Congress approves the cuts.

Pot Revenue Not a Budget Fix

Interest intensified after Colorado budget officials last week estimated the state could generate more than $100 million a year in additional tax revenue from sales of recreational and medicinal marijuana.

As a young man Hickenlooper smoked weed, he said. As governor, he opposed Colorado's pot referendum because of the health risks, especially to teenagers, and its impact on the state's ability to attract businesses from outside the state.

“Governors shouldn't promote things that are inherently wrong,” Hickenlooper said he is advising colleagues. Using money from legal pot for such statewide programs as education or health care “is absolutely the wrong reason to think about legalizing marijuana,” Hickenlooper said.

Colorado is spending nearly all of the additional revenue on substance abuse treatment, drug education programs and law enforcement. Authorities will stop people trying to smuggle weed out of the Denver airport, Hickenlooper says, vowing that Colorado pot will not become as exotic on the East Coast as Coors beer was during the 1970s before the brewery sold it nationally.

The governor says he is telling his colleagues to wait a few years before embracing the legalization movement. "When governors have asked me, and several have, I say that we don't have the facts," the Democrat said. "We don't know what the unintended consequences are going to be and we're going to regulate it every way we can. What I do is urge caution. Make sure you look at it very thoroughly.”

Secret to Staying in Office

Each said the polarization of the political parties nationally was the biggest change they had seen in the last eight years, a disruption that has altered the partnership between states and the federal government. The showdowns in Congress over raising the debt ceiling, the government shutdown and the automatic federal spending cuts played havoc with state budgets.

“It made all of our revenue forecasts jumpy,” said O'Malley, a Democrat. “It hurt business and consumer confidence at a time when we should be pulling all oars to make it better.”

Added Beebe, a Democrat with a GOP-controlled legislature: “The political middle has decreased significantly. This ‘my way or the highway' approach is inconsistent with what the Founding Fathers set up.”

Heineman, a former GOP aide to a Nebraska congressman, said it has been frustrating for him to come to Washington every year to discuss the same issues without making progress. Regardless of party, governors are more willing to solve problems because that is what they do in their states, he said.

“Congress is unwilling to make the tough decisions because they're afraid it may cost them re-election,” Heineman said. “That's not true. I know every Nebraskan doesn't agree with me about everything, but if you explain things to them honestly, they see what you're trying to do.”

As Heineman spoke, Branstad  of Iowa joined the interview. Iowa doesn't believe in term limits; Branstad is seeking a sixth term this fall, which would make him the longest serving governor in U.S. history. Voters can decide whether an incumbent politician has served too long by electing someone else, he said. “You lose some real talented people and continuity” because of term limits, he said.

After 31 years in elected office, the last eight as governor, Beebe offered advice to his successor. “I've always believed…that if you get education and economic development right—make those the pillars— that all the other things are easier. Make education, from pre-K to end of life, your priority. If you don't have good jobs, all you are is a farm club for another state.”