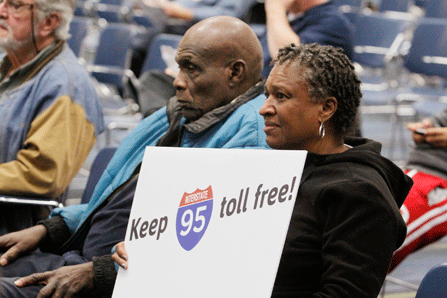 Waynetta Wingard of Petersburg, Va. opposes tolls on I-95 at a community meeting in 2012. Virginia won permission to toll the highway from the federal government, but the state later backed off from the project. (AP)

Wisconsin is facing problems familiar to most states when it comes to paying for its roads and bridges. The gas tax is not bringing in enough money to meet its needs, the steady stream of federal transportation money may be in jeopardy and voters do not want to pay more taxes.

The crisis was laid out last year in a 176-page report to Wisconsin lawmakers on the funding problems and the deteriorating road network. Legislators received another reminder in September, when Green Bay officials had to close a bridge that carries 40,000 vehicles a day because it was sagging. It took until January to fix and reopen the bridge.

In their scramble to find new funds, leaders in Wisconsin and other states are eyeing the same solution: tolls on highways. Federal law bans most states from tolling existing interstates, but officials in Wisconsin and in other states hope Congress will change that law this year, when it writes a new surface transportation bill to replace one that expires Oct. 1.

“All we're asking for is giving the states the flexibility, if they want to take on that challenge, to see if they can sell it,” said Jim Tymon, director of program finance and management for the American Association of State Highway and Transportation Officials.

“Tolling existing interstate lanes is the least efficient, least effective mechanism to fund transportation in the long term,” said Hayes Framme, a spokesman for the Alliance for Toll-Free Interstates, whose members include the American Trucking Associations, UPS, FedEx, McDonald's, Dunkin' Donuts and other groups.

New Life to an Old Debate

Congress banned tolls on interstate highways when it created the national road network under President Dwight Eisenhower in 1956. Only stretches of highway that already had tolls — such as those in Illinois — could keep them. The federal government also allows tolls on new highways and on lanes added to existing interstates, as long as the revenue is used for repair and maintenance of the tolled road.

Congress loosened the restrictions slightly in 1998, creating a pilot program that allowed three states to impose new tolls. Missouri, North Carolina and Virginia won those slots by applying to the federal government, but none of those states has followed through. In fact, Virginia legislators ruled out tolls on I-95 as part of a sweeping transportation package they passed last year.

Though they have declined to act, those states are making it impossible for other states that have explored new tolls in public or in conversations with federal officials (such as Arizona, Connecticut, Rhode Island and Wisconsin) to enter the pilot program.

The Federal Highway Administration, which administers the program, says it retains the right to withdraw conditional approval from the states that now have the slots, clearing the way for other states to step in. Currently, no other states have an application pending with the agency.

The original idea behind limiting tolls on interstates was to make sure drivers were not taxed twice for the same road — once through federal gas taxes and again at the toll booth.

But the federal government's funding crisis for transportation could force Congress to rethink that policy.

The federal government's gas tax, currently 18.4 cents per gallon, has not changed since 1993. Because of inflation and the improving fuel efficiency of vehicles, the tax is no longer bringing in enough money to keep up with transportation needs.

The U.S. Department of Transportation predicts the Highway Trust Fund, its main source of money for road projects, will run dry by August. That would delay reimbursements to states and put long-term funding plans in jeopardy.

“From the point of view of the American people, (tolling) is providing another avenue to fund infrastructure that is likely deteriorating,” said Patrick Jones, executive director and CEO of the International Bridge, Tunnel and Turnpike Association, a group that represents toll operators and vendors.

Tolling existing interstates makes sense, he said, because many of the original highways have surpassed their useful life and need to be completely rebuilt.

Jones said states, not the federal government, should decide whether tolls are appropriate.

But Framme, from the tolling opposition group, said there is too much at stake to let states explore more tolling. He noted that overhead costs for administering the gas tax are far lower than for tolling.

Framme said tolls could increase prices for manufacturers, shippers, retailers and customers. They would also hurt fast-food restaurants, convenience stores and other businesses along interstate routes, he said.

“What kind of harm are you doing?” Framme asked. “Are you really getting the benefit out of the tolls that would offset any effects to the economy by putting truckers out of business … simply by trying to raise other money for transportation?”

A green light from the federal government would leave tolling decisions to the states, but there is no guarantee they would rush to add toll booths, as Missouri, North Carolina and Virginia have shown.

The idea did produce some bipartisan agreement in the Wisconsin State Assembly, a chamber that has experienced deep party divides in recent years.

“It's something the speaker thinks is important that we keep in the conversation, that hopefully we can address some day,” said Kit Beyer, a spokeswoman for Speaker Robin Vos, a Republican. “He'd be willing to bring it up and move forward with it if it does get approval from the federal government.”

Peter Barca, the chamber's Democratic leader, said tolls would be the “best approach” to pay for transportation.

“In his last two budgets, the governor has been paying for transportation on the credit card. This seems like the idea that makes the most sense,” Barca said.

But the idea has met a cool reception.

Gov. Scott Walker, a Republican facing re-election this fall, said he is more interested in building new express lanes that would be tolled. That approach would be permissible under current federal law, because it would add road capacity instead of adding tolls to existing lanes.

Walker is also looking at funding sources other than tolls, including the possibility of raising the gas tax or the sales tax. But he would wait until lawmakers take up the budget next year before proposing the changes.

“We would make it as part of an overall package, so that any change that was done would be about lowering the overall tax burden in the state but changing the way in which we fund transportation,” Walker said.

Rhode Island officials have looked at tolling over the years, and Democratic Gov. Lincoln Chafee suggested it at a National Governors Association discussion on transportation funding last weekend.

But Chafee later said he is not asking his state's congressional delegation about tolling, because he is focusing on making sure federal money from the Highway Trust Fund keeps flowing.