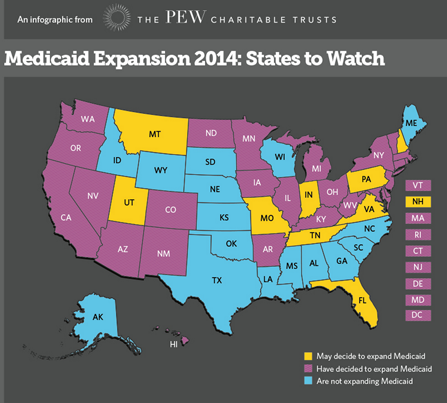 Of the 25 states that already have expanded Medicaid under the Affordable Care Act, all but Arkansas, Iowa and Michigan simply added newly eligible adults to their existing Medicaid programs. That was the easiest approach.

In contrast, the states that haven't yet expanded Medicaid but are considering doing so want to tailor the program to fit their own priorities—and that will take time.

“It's not going to happen overnight,” said Matt Salo, director of the National Association of Medicaid Directors.  The question, Salo said, is exactly what kind of flexibility each state asks for, and how far the Obama administration will go to accommodate them.

New Hampshire, Pennsylvania, Tennessee, Utah and Virginia are currently considering Medicaid expansion. Governors in Florida, Indiana, Missouri and Montana have declared their support for some form of Medicaid expansion, but no action is expected this year in those states.

Of all the states currently considering expansion, New Hampshire may be the only one that succeeds in expanding coverage this year. In fact, Pennsylvania's latest proposal, filed last week with the U.S. Department of Health and Human Services, specifies that it is not prepared to expand its Medicaid program before Jan. 1, 2015.

States that opt to expand Medicaid have this much in common: Under the ACA, the federal government will cover the entire cost of providing Medicaid coverage to adults with incomes up to 138 percent of the federal poverty level ($15,856 for an individual).  The 100 percent coverage only lasts through 2016, however. After that, the federal share declines each year, tapering to 90 percent in 2020 and beyond.

Beyond that, each of the states weighing expansion has a different idea of what it would look like.

Instead of adding people to the Medicaid rolls, states that are interested in the so-called “private option” want to use Medicaid money to help people purchase private insurance. The private option remains the most politically feasible way for states with Republican governors or GOP-led legislatures to take advantage of federal Medicaid dollars without fully embracing the ACA.

But even in Arkansas, the first state to win federal approval for a private option, the model has come under fire from conservative lawmakers who want to rescind it. The federal government also approved the private option in Iowa and Michigan.  In all three states, the process of winning federal permission involved months of negotiations, mountains of paperwork, and multiple state and federal hearings. Any new states that want to pursue the private option will have to go through the same drill, which typically takes more than six months.

“Each state is coming to CMS (the federal Centers for Medicare and Medicaid Services) with their own unique approach to the private option,” said Caroline Pearson, a health care analyst with consulting firm Avalere Health. 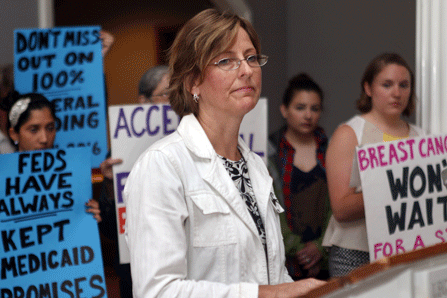 Barbara Marzelli of Newbury, N.H., speaks at an event highlighting the benefits of Medicaid expansion for women's health. Several states are weighing Medicaid expansion, but New Hampshire appears to be the one with the best chance of expanding coverage this year. (AP)

Many states are requiring consumers to share in the cost and some want to eliminate non-emergency transportation services and other benefits.  Several states are using the waiver process as a platform to reform the way Medicaid services are delivered and financed, Pearson said.

Each state's Medicaid program is unique, and the states have disparate health care needs. But there are clear limits to what the administration can do under the Medicaid law, according to Judith Solomon, health policy director at the left-leaning Center on Budget and Policy Priorities.  The federal government may give states some leeway in how they provide coverage, she said, but it will not approve a plan that sets stricter eligibility rules than those set forth in the ACA.

Solomon also noted that states have a lot to lose by prolonging the process. At a legislative hearing last month, New Hampshire Gov. Maggie Hassan, a Democrat, put a price tag on her state's inability to decide which course to pursue. “New Hampshire has already lost nearly $4 million in federal funds this year,” she said. As each day passes, Hassan said, another $500,000 is left on the table.

Here's a rundown on what states are proposing and where they are in the process:

New Hampshire: The GOP-led Senate earlier this month agreed on a bipartisan plan called the  New Hampshire Health Protection Program that would expand Medicaid to an estimated 50,000 newly eligible adults.  Under the proposed bill, which is slated for a vote next month, New Hampshire would cover eligible adults under the existing Medicaid program starting July 1, and by December 31, 2014, apply for a waiver to use the private option in 2016. If the federal waiver is not approved by March 31, 2015, the so-called “bridge” plan would expire on June 30, 2015. The Senate proposal also would use of an existing state program to pay the employee portion of employer-based health plans for newly eligible adults. The House, which approved an expansion bill last year, is expected to approve the Senate plan, and Hassan is expected to sign it into law by the end of March. She praised the proposal in her State of the State address on Feb. 6.

Pennsylvania: Republican Gov. Tom Corbett filed a waiver request last week that proposes to expand Medicaid to an estimated 500,000 low-income residents using the private option. Called Healthy Pennsylvania, the plan would require consumers to pay a portion of premiums and co-payments and to seek work if they are unemployed.  The requirement to seek work is likely to be a sticking point with the Obama administration.

Tennessee: Although the state has not filed a waiver request, Republican Gov. Bill Haslam last year proposed an expansion plan that would use the private option along with changes to the health care delivery system designed to reduce costs. Called the Tennessee Plan, it would require consumers to pay a portion of their health care bills. In a Dec. 9 letter to HHS Secretary Kathleen Sebelius, Haslam expressed concern that his requests for flexibility had not been met. The state continues to negotiate with HHS, according to Kelly Gunderson, spokeswoman for TennCare, the state's Medicaid program.

Utah: In January, Republican Gov. Gary Herbert became the latest governor to announce support for expanding Medicaid.  He has not yet offered details on a plan, but has said he wants to cover about 60,000 Utah residents with incomes below the federal poverty line ($11,670 for an individual), because they are not eligible for federal tax credits on the exchange.  Republican leaders in the legislature have proposed using state money rather than expanding Medicaid under the ACA. HHS has already nixed proposals by other states to partially expand Medicaid to people with incomes below the poverty level, instead of including every adult up to 138 percent of poverty.

Virginia: The state's new Democratic governor, Terry McAuliffe, has made Medicaid expansion a top priority. The Democratic-led Senate has proposed a Medicaid expansion plan called Marketplace Virginia that would use the private option plus consumer cost sharing and a job search requirement to cover an estimated 250,000 low-income adults. The proposal, which is included in the state's budget, faces stiff opposition in the GOP-led House where a vote must be taken before the end of the state's fiscal year in June.  According to the Medicaid agency, Virginia's cost of delay is $5 million per day.

Indiana: Republican Gov. Mike Pence asked the federal government last year for permission to expand Medicaid using an existing low-income health care program called Healthy Indiana.  A high-deductible health plan with a health savings account, Indiana's plan is not expected to win federal approval because it requires consumers to pay a higher share of costs than Medicaid rules allow. No action is expected until next year.

Missouri: Gov. Jay Nixon, a Democrat, has stepped up his efforts to persuade the state's Republican-led legislature to approve some form of Medicaid expansion.  He has said he is willing to support a private option and consumer cost sharing to encourage responsibility. So far, little progress has been made in finding a middle ground that state lawmakers will consider.

Montana: Democratic Gov. Steve Bullock supports Medicaid expansion and he almost persuaded the state's GOP-controlled legislature to approve it last year. But the measure failed when a Democratic lawmaker accidentally pushed the wrong button, voting against it.  According to Montana rules, a mistaken vote cannot be corrected if it affects the outcome of the vote. The legislature meets every other year and 2014 is an off year. Supporters of Medicaid expansion just got legal certification for a November ballot measure that would extend coverage to an estimated 70,000 low-income Montanans. They can now start gathering signatures. 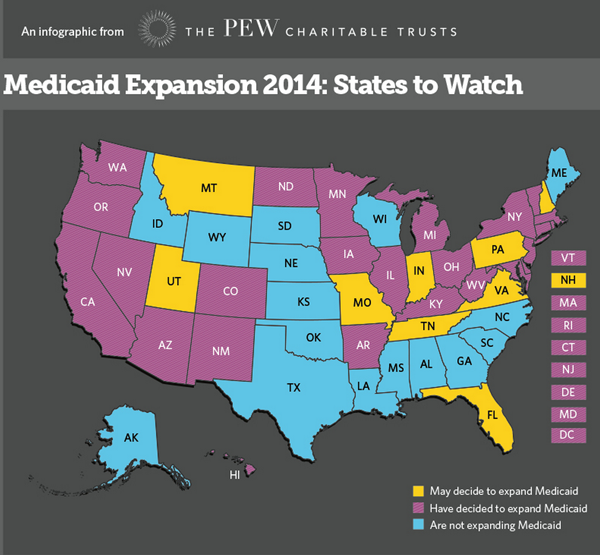