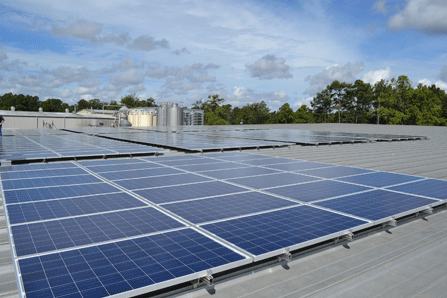 Someone is installing a solar power system in the U.S. every four minutes. Generous state and federal tax credits for hooking up solar panels on roofs or in fields make solar energy attractive to homeowners and businesses.

Another bonus is that those who generate solar energy can roll over what they don't use as credit against their next utility bills, like rollover minutes on a cell phone bill, or sell excess energy back to the utilities.

As the solar industry thrives, states are bracing for more showdowns this year between solar advocates and utility companies over how to balance reimbursing those who generate solar energy with supporting the country's power grid.

The battles are heating up in sun-soaked states like California, Arizona and Hawaii where solar projects are surging, but also in less expected places, such as Kansas and North Carolina.

Driving the debate is the rapid growth in solar installations, up 76 percent in 2012 from 2011, according to the most recent data available from the Solar Energy Industries Association.

Solar is still a small piece of the energy pie in the U.S., at around 1 percent of total energy produced.  Just four states  accounted for more than two-thirds of grid-connected solar system installations in 2011: Arizona, California, New Jersey and New Mexico.

New Jersey, while not considered as sunny as other states, has one of the most aggressive renewable portfolio standards in the country. The state, for example, requires suppliers and providers to procure at least 4.1 percent of sales from qualifying solar electric generation facilities by the year 2028.

Various state and federal tax credits for installing solar panels on homes, businesses and farms make economic sense for those willing to make the investment, as Stateline has reported.  Solar system users in Hawaii, for example, can take 35 percent of installation costs off their state tax bills and another 30 percent in federal tax credits. The average cost of installing a 600-square-foot solar system to power a typical home is $55,000.

What concerns utilities is the system of rolling over credits for excess electricity to future utility bills, called net metering. Currently, 43 states and the District of Columbia have policies encouraging the practice.

The Coalition for Solar Rights, which advocates for solar, called net metering “one of the most important state policies for empowering Americans to generate their own power from the sun.”

Utilities, however, say many solar customers aren't paying their fair share. While net-metering polices vary by state, customers with solar systems are usually credited at the full retail electricity rate, which includes not just the cost of the power, but all the fixed costs of the poles, wires, meters and other infrastructure that make the electric grid safe and reliable.

An average residential customer paying $110 a month for electricity is receiving $60 worth of grid service, according to a report from the Edison Electric Institute, a trade group that represents U.S. utility companies.

“Through the credit, net-metered customers effectively are avoiding paying these costs for the grid,” the institute wrote.  These costs then are passed on to other customers, it said.

In California, which leads the country in solar production, the state's net-metering program could end up costing state ratepayers $1.1 billion a year by 2020, according to a report last fall from the California Public Utilities Commission.

Some utilities are now pressing state regulators or legislatures to charge solar customers a fee or to reduce the rollover credits with the money going to help maintain the power grid. That was the issue last year in Arizona, where the state's largest electric utility, Arizona Public Service Co., succeeded in attaching a fee to new solar installations.  The company estimated that each of the state's 20,000 solar rooftop customers costs $1,000 in upkeep to the grid, which was shifted to other nonsolar customers.

The Arizona Corporation Commission, the state's public utility commission, voted 3-2 last November to impose a 70-cents-per-kilowatt charge on new solar installations. The cost amounts to about $4.90 a month for solar customers.

“The Arizona Corporation Commission has taken an important step in reforming the state's net-metering policy,” Don Brandt, APS president, said at the time. “The ACC determined that net metering creates a cost shift.”

Tom Kuhn, president of EEI, the utility trade group, also praised the ruling. “The ACC decision recognizes that it's only fair that everyone who uses the grid and benefits from its services should help pay to support it and keep it operating reliably at all times,” he said.

The action was a limited victory, however. APS had sought to charge $50 to $100 a month to future customers who install solar panels.

In another dispute, solar proponents in Kansas have launched a campaign this year against legislation that would reduce the amount of money solar customers would get for their excess power. The issue also is brewing in North Carolina, where Duke Energy wants to charge solar customers more to help maintain the grid.

Possible changes that could affect the benefits of solar to customers from current net-metering policies sparked protest rallies last year in Arizona, California and Colorado.

Another flashpoint deals with capping the number of solar installations that can qualify for reimbursements. When states first set up net metering in the 1980s, the approach was new and unproven so some states limited the programs.  Once a state reaches its cap, businesses and residents still can put solar panels on their buildings and homes, but they won't get reimbursed at the same level.

Solar advocates want to increase the caps while utilities largely do not.  Last year, several states acted on this front:

“Net metering remains a pivotal policy issue in 2014,” Ken Johnson, a spokesman for the Solar Energy Industries Association, a trade group, said. Among actions at the state level his group is watching this year include a series of net-metering workshops to be held by the Arizona Corporation Commission and studies in Colorado and Nevada to evaluate the costs and benefits of net metering.

In the days leading up to the Arizona Corporation Commission's decision on net metering, a conservative group called 60 Plus Association ran a controversial television ad that suggested that solar companies are against changes in net metering because the companies rely heavily on government subsidies. The ad compared solar companies to Solyndra, the failed solar startup that received some $500 million in federal loan guarantees that conservatives say epitomizes what is wrong with the Obama administration's stimulus and other policies.

Some conservative groups, including the American Legislative Exchange Council and the Heartland Institute are calling on states to change net-metering polices.

In the past, Republican governors have been proponents of solar.  Former California Gov.  Arnold Schwarzenegger in 2006, for example, launched a Million Solar Roofs Program with the goal to provide California with 3,000 megawatts of clean, renewable energy and reduce the output of greenhouse gases by 3 million tons. Former Minnesota Gov. Tim Pawlenty endorsed and signed in 2007 a “25 by 2025” law requiring that 25 percent of the state's electricity be produced from renewable sources by 2025, including solar.

Some of the most vocal supporters of expanding solar and net metering are currently Democrats.

Research from the Pew Research Center found that since April 2009, there has been a 30-point decline in the percentage of Republicans and Republican leaners supporting more federal funding for research into alternative energy technologies, such as solar.  Most Republicans and GOP leaners (59 percent) told Pew that businesses will produce technology without government investment. (The center is a sister organization of Stateline.)

Vermont Gov. Peter Shumlin, a Democrat, pleaded for more solar projects in his 2014 budget address. “When we see solar panels on rooftops in our neighborhoods or on our fields, we are often looking at projects made possible by our net-metering program,” he said last month. Shumlin said he was committed to expanding net metering this session.

Solar could become an issue in the Florida gubernatorial race with the involvement of former Gov. Charlie Crist, then a Republican and now running for the Democratic nomination. Solar advocates gave Crist in 2009 the “Golden Meter” award when he was governor for Florida's net-metering rules adopted the previous year.  Republican Gov. Rick Scott has endorsed renewables, but has not been vocal on net-metering programs.