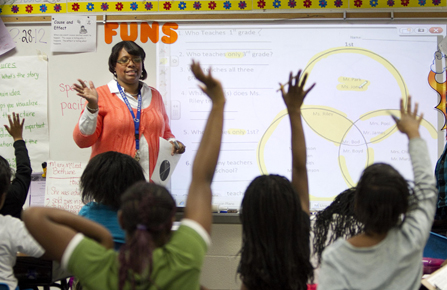 Wiley Elementary School third grade teacher Angelia Higgins asks a question of her students during math class in Greensboro, N.C. North Carolina is one of 19 states that allow corporal punishment in schools, although most school districts in the state have abolished it. (AP)

Kansas state Rep. John Rubin, chairman of the House Corrections and Juvenile Justice committee, said Thursday his committee will not consider a bill filed by Rep. Gail Finney that would have allowed parents and teachers to spank children hard enough to leave redness or bruising.

“I don't think it was carefully enough drafted,” said Rubin, a Republican. “I think it was overly broad.” Rubin said most of the prosecutors he has spoken with about the bill are not in favor of the legislation. He added that there has been “an outpouring of disenchantment” regarding the bill from the public and members of the committee.

Kansas is already among 19 states that allow corporal punishment in schools. But a lawmaker there said the intensity of the spanking may not be enough.

Democratic Rep. Gail Finney has introduced a bill that would allow parents, teachers and caregivers to spank children hard enough to leave redness or bruising. Under current state law, spanking that does not leave marks is already permitted.

Legal corporal punishment in schools typically means paddling students with a wooden board, according to the Center for Effective Discipline, a program of the nonprofit National Child Protection Training Center. Many school districts within those states that allow spanking prohibit corporal punishment.

Deborah Sendek, program director for the Center for Effective Discipline, called the proposed legislation in Kansas very shocking and disheartening.

New Mexico was the last state to ban corporal punishment in schools, in 2011, and before that Ohio, in 2009.

In 2005-06, the last school year for which nationwide data are available from the U.S. Department of Education's Office for Civil Rights, 223,190 children, or less than half of one percent, were subjected to physical punishment in schools across the country, a drop of almost 18 percent from two years earlier. The number of children hit in schools has declined steadily since the early 1980s.

Finney's bill would allow “up to 10 forceful applications in succession of a bare, open-hand palm against the clothed buttocks of a child and any such reasonable physical force on the child as may be necessary to hold, restrain or control the child in the course of maintaining authority over the child, acknowledging that redness or bruising may occur on the tender skin of a child as a result.”

Under the bill, parents and anyone authorized by parents, including school personnel, may use corporal punishment to “maintain parental authority and to discipline a child.”

“What's happening is there are some children that are very defiant and they're not minding their parents, they're not minding school personnel,” Finney said, according to The Wichita Eagle. “What (the proposed law) does is it tries to give a definition…. But it does not allow hitting, punching, beating, because that is still considered abuse.”

Sendek of the Center for Effective Discipline said that spanking children sends them the message that violence is acceptable.