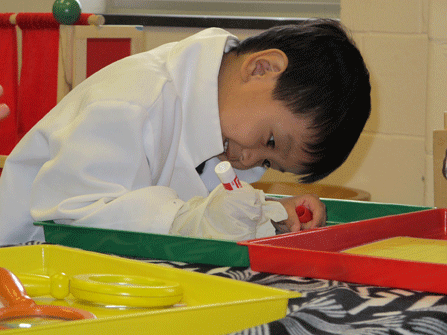 Zaw Ree Saw, 4, pretends to be a veterinarian at West Hertel Academy in Buffalo, N.Y. Education advocates argue that stiffer school standards must be accompanied by more money for expanded preschool and other changes to help students reach higher goals. School funding lawsuits are pending in New York and 10 other states. (AP)

Any week now, the Kansas Supreme Court  will rule on a lawsuit filed by parents and school districts alleging that school spending cuts violate the state's constitution, which promises “suitable” funding for public education.

In New York last week, an education advocacy group filed suit claiming the state is nearly $4 billion short of fulfilling its school spending obligation under a 2006 court ruling. And in Texas, lawyers earlier this month wrapped up closing arguments in a similar lawsuit.

Across the country, litigation is pending against 11 states over inadequate or inequitable school funding. That is nothing new: Over the years, all but five states have been the subjects of such lawsuits. The change is that in many of the recent cases, higher state standards lie at the heart of the arguments.

“The states have promulgated content standards, assessment systems—they've promulgated lots of accountability,” said David Sciarra, executive director of the Education Law Center, which advocates on behalf of students in New Jersey and is viewed nationally as a leader in school funding lawsuits. “But what the states haven't done is determine the cost of delivering standards-based education to all kids.”

More states are demanding that students be ready for college and careers when they graduate high school, and they are holding teachers and schools accountable for student achievement. Sciarra and others argue it costs more to educate children to the higher standards, and that states need to figure out how much more.

The extra money might be used, for example, to shrink class sizes, provide preschool for low-income students, or to beef up instruction for students with special needs, such as those learning English or those with disabilities. Some of the lawsuits specifically argue that states are not spending enough to educate students with special needs, who are being asked to meet the tougher standards along with their classmates.

“I think [the courts] are playing a proper role in not establishing what kids should know and be able to do but holding the legislature accountable to what it says kids should be able to do,” said Willliam Koski, director of the Youth and Education Law Project at Stanford Law School, which is representing the plaintiffs in Robles-Wong v. California.

But Eric Hanushek, an education expert at Stanford's Hoover Institution who has conducted influential research on evaluating teachers, said there is too much focus on the amount of money states spend, and not enough on how they spend it.

Hanushek, who has testified on behalf of states in school funding lawsuits more than a dozen times since 1973,  said there is “considerable evidence that suggests that there's no clear relationship between what's spent on schools and student performance.”

“It's very difficult for the courts to address issues of how money is spent. They can't enforce it, they don't have the capacity to make these kinds of policy decisions very well, so the courts generally stick quite narrowly to how much money is spent,” he said.  “That hasn't been very effective in terms of improving achievement.”

Hanushek said school spending is largely driven by class size and teacher salaries, and he asserts that neither is closely related to student achievement. Instead, he argues that school districts should focus on improving teacher quality.

One common thread in the current spate of education funding lawsuits is the argument that states have failed to comply with previous court rulings.

“It needs eternal vigilance,” said Molly Hunter, who directs Education Justice, which provides technical assistance to educators and litigators seeking to expand educational opportunity for children. “It's not like a broken arm where we just fix it. It's something that needs attention time and time again, and where legislatures sometimes do some backsliding.”

In some cases, states have argued that they just didn't have the money, particularly during the recession and its aftermath.

But Michael Rebell, a professor at Columbia University who filed the recent lawsuit on behalf of New Yorkers for Students' Educational Rights, said that when constitutional rights are at stake, the courts have ruled that “fiscal constraints by the state are not an acceptable excuse.”

Below are updates on a few of the ongoing education funding lawsuits:

Education officials in California recently approved a historic overhaul of school funding that would give schools a base amount of funding per pupil with extra funding for disadvantaged students and for schools with large numbers of students who are low-income, English-language learners, or are in foster care.

But it will remain unclear for some time how the new funding formula will affect two school funding lawsuits, which have been consolidated at the California Court of Appeal and are waiting for oral arguments to be scheduled.

Koski of the Youth and Education Law Project, speaking for himself and not the full contingent of plaintiffs, said the new funding formula appeared to be a step in the right direction. Nevertheless, he said state funding of schools remains “woefully inadequate.”

In Gannon v. State of Kansas, a trial court ruled last year that cuts to school spending that began in 2009, which resulted in larger class sizes, teacher and staff layoffs, and cuts in services for at-risk students, reduced school funding below a “suitable” level. The judges ordered the state to increase per-pupil funding to a constitutionally-mandated level.

Republican Gov. Sam Brownback appealed to the Kansas Supreme Court, which is expected to hand down a ruling soon. Republican lawmakers have threatened to remove the court from having jurisdiction over challenges to the state's education funding.

Sciarra of the Education Law Center said that if the state Supreme Court sides with Kansas, it “sends a signal across the country that we can just continue on with business as usual as far as how states fund education.” And if the lawmakers follow through with their threat, Sciarra said, it would undermine the judiciary's role as the interpreter of law.

New Yorkers for Students' Educational Rights argues that the state has funneled nearly $4 billion less into the state's schools than the additional $7 billion the legislature promised in the wake of an earlier case, also brought by Rebell, the Columbia professor.

Rebell pointed out that in New York, Democratic Gov. Andrew M. Cuomo has proposed $2 billion in tax cuts even as the state has failed to fully fund education.

“I'm all for taxpayers too, but pay your obligations to the children first,” Rebell said. “That's what I think is totally out-of-line here.”

State officials note that New York spends more per-pupil on education than any other state, but Rebell argues the state also has one of the most inequitable distributions of funding, with school districts in different parts of the state spending vastly different amounts per pupil. The case is at the State Supreme Court.

After the Texas legislature cut funding to schools by $5.4 billion in 2011, more than half of the state's school districts filed suit arguing that state education funding was inadequate. In 2013, State District Judge John Dietz sided with the plaintiffs, agreeing that the funding violated the state constitution, prompting the legislature to restore $3.4 billion. In January, the same judge began to examine the impact of the restoration of funding and the legislature's decision to ease graduation requirements.

David Hinojosa, a lawyer representing the Mexican American Legal Defense and Educational Fund and low-income school districts, said the state's partial restoration of the funding cuts is least $2 billion short of the 2010-2011 funding requirements, and doesn't account for inflation or the tougher standards placed on students and school districts. If the plaintiffs win, the state is expected to appeal the case to the Texas Supreme Court.