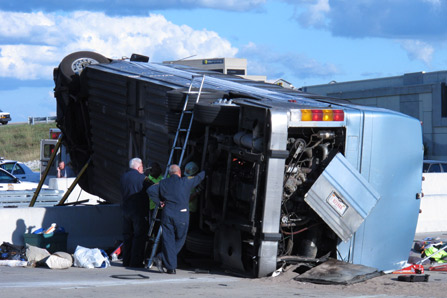 As the number of bus passengers approaches the number of U.S. airline passengers, transportation experts are taking a closer look at the widely disparate state efforts to make sure buses are safe.

States are responsible for enforcing federal safety laws for buses that cross state lines, but they take very different approaches. Nearly half the states require annual inspections; the rest do not. Some spend almost all of at least $165 million in federal inspection money to look at trucks, while others focus more heavily on buses. Others are more aggressive at conducting roadside inspections.

States also have different rules for buses that do not fall under federal jurisdiction, because they operate only within the state.

Industry leaders and safety advocates want more consistent enforcement among states and within states, although they differ on the tactics. Congress has also asked the U.S. Department of Transportation to study whether more uniform state laws are needed.

“We want to make sure everybody who is in the business is performing at the same level,” said Peter Pantuso, president and CEO of the American Bus Association, which represents about 1,000 bus companies.

The discussion over state enforcement methods comes as federal regulatory efforts are under scrutiny. The Federal Motor Carrier Safety Administration, in particular, came under fire after 28 people died in motor coach accidents in 2011.

Since then, federal regulators have stepped up inspections, tried to better identify rogue operators and started requiring seat belts on new buses.

The scrutiny comes as industry studies show American buses provide more than 700 million passenger trips a year, compared to 720 million on airlines. There are about 4,000 bus companies providing interstate service, according to federal regulators.

Federal regulators targeted companies last year that they deemed to pose significant risks. As part of that eight-month effort, they shut down 52 bus companies and removed 340 buses from the road.

The number of people who die in bus accidents has remained steady in recent years at around 20 a year. But when crashes do occur, they can be devastating, because of the number of passengers on board.

Indiana state Sen. Tom Wyss was surprised what he learned about his state's bus safety laws after a church bus crash in Indianapolis last summer left a youth pastor, his pregnant wife and a chaperone dead.

The Republican senator, who chairs his chamber's transportation committee, started looking into the state's inspection requirements, because the driver initially blamed faulty brakes for the accident. Investigators later found no mechanical problems with the bus, and determined that high speed was a cause of the accident.

Wyss discovered bus owners in Indiana do not have to show the state that their vehicles were inspected in the last year.

He was particularly worried about buses owned by churches, scouting groups and other nonprofit organizations, which face less scrutiny under federal regulations than commercial buses.

“When you get on a Greyhound or some other bus, you know that puppy has been inspected. But what about this one here? It turns out… we don't check buses that are private buses,” he said.

So Wyss pushed a bill through the Senate requiring bus owners to show state police proof of inspection when they get their license plates renewed. The bill passed the Senate 33-14 and is now in the Indiana House.

“The state has a responsibility, if we're going to license (buses), to make sure they are as safe as can be,” Wyss said.

If the bill passes, about 2,100 private buses would need annual inspections, legislative analysts estimate. Wyss' bill would allow buses to be evaluated by private inspectors, although the Indiana State Police could set up its own program. The state police already inspect school buses, and did 16,000 of those inspections last year.

Twenty-three states and the District of Columbia required commercial vehicles to undergo state-approved annual inspections in 2012, according to J.J. Keller and Associates, Inc., a private company that consults with businesses on regulation compliance. Bus owners in other states must still have their vehicles inspected for federal purposes, but do not have to report results to the state.

Besides applying only to buses that cross state lines, federal rules are also less strict for the owners of private buses—like a musician's tour bus or a church bus—when it comes to keeping records of annual inspections.

Nearly two years ago, Congress told the U.S. Department of Transportation to study whether to require states to put in place mandatory inspection laws. The provision was part of the larger highway bill Congress passed in 2012. It set a deadline for the report to be issued by next year.

Pantuso, the bus association's president, said a uniform standard would be fairer, because it would discourage unscrupulous companies from registering in states with low standards to avoid scrutiny.

Will Schaefer, director of vehicle programs at the Commercial Vehicle Safety Association, a group of agencies that inspect trucks and buses, said federal officials should also standardize the criteria for evaluating whether a truck or bus passes inspection.

“Unfortunately, the way the federal regulations have evolved, we don't have a very specific guideline of what needs to be accomplished during that inspection,” he said.

Many safety advocates want buses inspected, not just in garages, but on the roads they travel.

“Annual inspections are a snapshot,” said Henry Jasny, vice president for Advocates for Highway and Auto Safety. “On-site inspections are not expected… You can get a much better feel of how (a bus) is used. It is a more real-world test of whether the company is following all of the rules, the driver is fit and the bus is in good shape.”

A federal law passed in 2005 prohibits police from pulling over buses with passengers on board for the sole purpose of an inspection. Random inspections are supposed to take place only at a route origin or destination to protect passengers and prevent delays.

Police can order an inspection on the road for a bus carrying passengers, but only when they have already stopped it for a violation, such as speeding or a broken tail light.

The restrictions on roadside inspections make it harder to keep tabs of carriers that want to avoid attention, Jasny said. “It's a moving target. Companies change the locations of where they pick up or drop off passengers,” he said.

Trucks, which are subject to many of the same laws as buses, can be randomly inspected by police at weigh stations.

Pantuso, the bus association president, said states with effective inspection programs, such as California, Connecticut and Massachusetts, regularly inspect the records and buses of  companies of all sizes. “The ones that do it right, do it consistently,” he said.

In many states, he said, bigger companies are targeted more often than smaller ones, because they are easier to find and keep better records.

But companies that try to skirt the law should be examined just as rigorously. “They're a lot harder to find sometimes, but at the same time, their customers seem to be able to find them OK, and these are law enforcement officials we're talking about. That's what they're trained to do,” he said.

Its inspection teams handle both trucks and buses. Even though the vehicles are different, many of the laws governing the vehicles, the drivers and the records they must keep are similar, said Capt. Brandon Johnson, commander of the agency's commercial vehicle section.

The agency works with its federal counterparts to conduct “strike force” activities several times a year. The agencies inspect buses after they drop off passengers at theme parks, casinos, shopping malls and other popular destinations.

The highway patrol is also trying to work closer with other regulatory agencies during routine stops. It hopes to roll out a system this year that will allow officers to check a license plate to see immediately whether a bus carrier is licensed to operate. Currently, officers have to look that information up online or request it from a dispatcher.

“Our program works, and it's been working,” Johnson said. “The federal government is modeling its program after our program.”