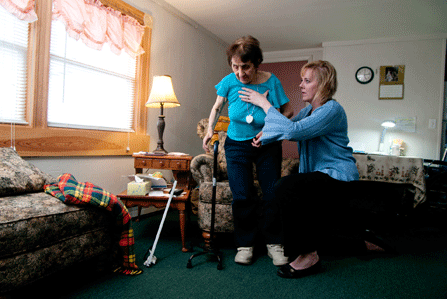 A physical therapist helps an elderly, disabled woman at her Warren, R.I., home. Under a new federal initiative, states are trying to improve the health care of so-called “dual eligibles,” people who qualify for both Medicare and Medicaid. (Getty)

They are a diverse group of low-income people who are disabled or elderly. Many have multiple chronic illnesses, or are battling depression or substance abuse. Most will need long-term care at some point in their lives.

In the nearly 50 years since Medicaid and Medicare were enacted, the two health care programs – one for the poor and the other for the elderly and disabled – have remained separate, with different rules, duplicative benefits and conflicting financial incentives. The result has been wasted money and disjointed care for more than 10 million “dual eligibles,” the Americans who qualify for both programs.

Massachusetts, which provided the model for the Affordable Care Act, is the first state to take advantage of an Affordable Care Act initiative designed to give dual eligibles better care at a lower cost. In 2011, the new Medicare-Medicaid Coordination Office began awarding $1 million planning grants to participating states and made critical Medicare data available to them for the first time. Now, instead of carrying separate cards for Medicare and Medicaid, dual eligibles in Massachusetts who are enrolled in the state's One Care program will get a single health plan and a case manager to coordinate their care.

Boston resident Dennis Heaphy, a 52-year old quadriplegic, said the Jan. 1 launch of One Care already has changed his life. “I feel like I won the lottery,” he said. Heaphy's case manager procured a larger bed for him, making it easier for his attendants to assist him.  Previously, Heaphy had been told that neither Medicaid nor Medicare would foot the bill for a bigger bed. “I literally called the equipment person in my plan and within two days I had a new bed,” he said.

In the past, individual states have tried to integrate the care of dual eligibles. Massachusetts, for example, has had Senior Care Options, an integrated Medicare-Medicaid program for seniors, for 15 years. But the idea has never been tried on a national scale, according to James Verdier, health policy analyst at Mathematica Policy Research. “For decades, we've been asking people with the highest needs and the least ability to navigate a complex care system to figure out the most complicated health care puzzles that exist,” he said.

Under the initiative, state Medicaid programs and the federal Medicare agency agree to split any cost savings that result from the experiment. Most states are contracting with managed care organizations to integrate the two plans, but Colorado, Connecticut, Iowa, Missouri, North Carolina and Oklahoma plan to integrate the two programs on their own.

Heaphy, who is an advocate for people with disabilities, said he and others are closely monitoring Massachusetts' experiment.  “We feel a real responsibility to get it right because everybody in the country is watching us,” he said.

Who Pays for What?

Medicare pays for prescription drugs, most hospital services and short-term nursing home stays. Medicaid pays for nursing home care after the first 90 days, home-based long-term care, dental care and transportation to and from doctor's offices and hospitals. Medicaid also reimburses its low-income members for their Medicare co-pays and deductibles.

But for dual eligibles, it can be difficult to keep track of who pays for what. Furthermore, experts believe that misaligned financial incentives in the two programs have cost states and the federal government billions of dollars.

For example, in as many as 40 percent of cases, the hospitalization of a nursing home resident might have been avoided if the nursing home had provided adequate medical care, according to a report from the Urban Institute.  But states, which pay for nursing home care through Medicaid, have no financial interest in correcting the problem, since the federal government pays hospital bills through Medicare.

Similarly, Medicare isn't particularly concerned with what happens to dual eligibles after they leave the hospital. In most cases, the best and most cost-efficient place for discharged patients to recover is at home. But the two programs don't communicate, so Medicaid typically isn't ready to provide home-based care for such patients when they leave the hospital. As a result, they often end up in expensive nursing homes.

Neither program focuses on preventive care, which might help chronically ill people avoid further deterioration of their health, which often lands them in a nursing home or hospital.

States that are participating in the federal initiative have worked with managed care organizations and the federal government to develop detailed care plans and financial agreements. Seven states – Arizona, Hawaii, New Mexico, Oregon, Tennessee, Vermont and Wisconsin – have chosen to drop out of the process, in part because federal requirements did not mesh with their own plans for integrating the programs.

Advocates, health care industry leaders and state and federal officials on both sides of the aisle agree that something must be done about dual eligibles. The question is how, and how quickly, to do it.

“The layers of complexity are mindboggling,” said Kevin Prindiville, executive director of the National Senior Citizens Law Center. “It needs to be done in a way that includes a lot of thought and a lot of planning about what a better system looks like.” Patient advocates worry that if states move too quickly some patients might inadvertently lose access to the doctors and medications they rely on.

California, for example, is trying to integrate Medicare and Medicaid for an estimated 456,000 people—nearly six times as many as in Massachusetts.  At the same time, California is alerting elderly and disabled residents that even if they opt out of the integrated plan, their Medicaid plan will be taken over by a managed care company and their network of doctors may change. Changes in the sign-up deadlines and effective dates are only adding to the confusion.

Earlier this month, California announced some changes to how it will roll out the plan.

"We want to make sure we get it right,” said Jane Ogle, deputy director at California's Department of Health Care Services.

“We have the state of California and the federal government working together [on a big project], and it's going to take time to get it right,” Ogle said, according to California Healthline.

Managed care organizations admit that integrating care for dual eligibles won't be easy. In particular, officials say they are concerned that spending limits that Medicare will impose during the three-year test period could make it difficult to improve care for an especially vulnerable population. Still, managed care companies, including non-profit and for-profit health plans, say they are squarely behind the project.

“If it wasn't hard, it would have been done a long time ago,” said Mary Kennedy, vice president of the Association for Community Affiliated Plans, a national trade association representing 57 nonprofit plans in 24 states. 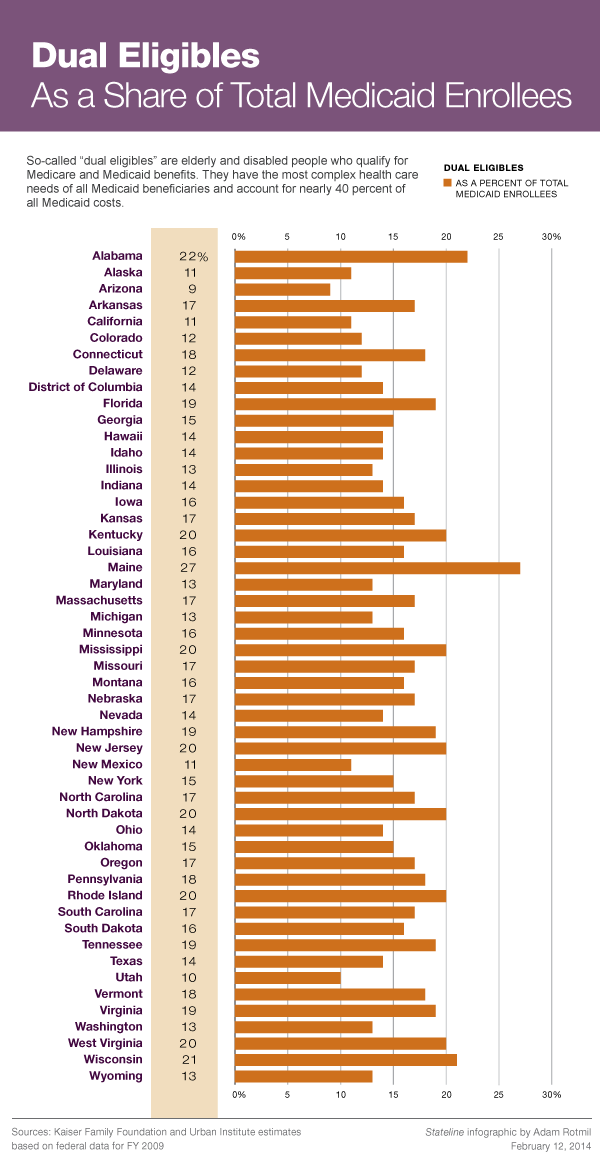