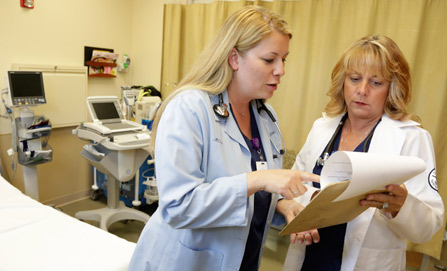 Nurse practitioners Michele Knappe, left, and Julie Zimmer go over a patient's chart at Ingalls Family Care Center in Flossmoor, Ill. The need for health care workers is expected to surge in the next decade, and several governors are pushing proposals designed to attract more qualified applicants. (AP)

As the U.S. economy gains strength and states are in their best financial position in years, governors are proposing unconventional tactics to create jobs, especially in health care and high-tech.

In crafting their proposals, many governors are trying to respond to a common complaint from employers: They are ready to hire, but can't find workers with the right skills.

“I talk to business executives almost daily about what they need to make their companies successful,” Kentucky Gov. Steve Beshear, a Democrat, said in his State of the State address. “They tell me that factors like low taxes, incentives, good roads, logistical support and low utility rates are all important. But their No. 1 concern is their workforce – finding enough talented, skilled, energetic, healthy and educated workers.”

Most governors, regardless of party, sounded similar themes as they opened their legislative sessions. 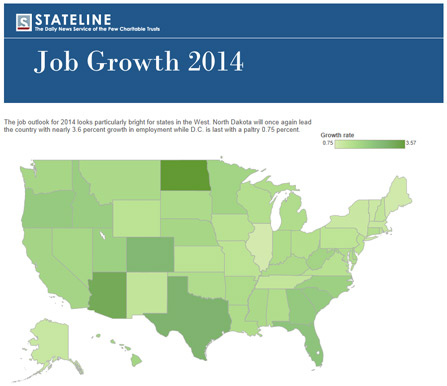 See Stateline Infographic: The Top States for Job Creation in 2014

Health care jobs are expected to be among the fastest growing jobs in the next decade, but many states are having problems finding enough people to fill them, including nurses and mental health professionals.

“Today, in 32 of 33 counties, we don't have enough health care workers, and that's before we attempt to add up to 205,000 more people to Medicaid,” New Mexico Gov. Susana Martinez, a Republican, said.

To attract more qualified applicants, Martinez wants her state to help repay student loans, particularly for those who agree to serve in rural areas. She expects this effort will attract up to 720 new health care workers this decade, including nurses, dentists and physicians.  While she didn't provide a dollar figure in her speech, she said late last year that she would seek $1.5 million for such an effort.

Rural areas in particular are having difficulties finding “preceptors,” a term that refers to health care professionals already in the field who agree to provide guidance and instruction to recent graduates. South Dakota Gov. Dennis Daugaard, a Republican, wants his state to pay providers who serve as preceptors for newly minted nurse practitioners.

Last year the state started paying preceptors to supervise physician assistants' graduates, which resulted in a nearly 40 percent increase in the number of South Dakota providers willing to do so. Preceptors typically aren't paid by states.

In New York, Democratic Gov. Andrew Cuomo is taking a different tack. He wants to create a new $105 million genome network involving researchers at the University of Buffalo and the New York City Genome Center. He is banking on this initiative to create jobs while yielding scientific breakthroughs to treat cancer and diseases such as Alzheimer's, Lou Gehrig's and Parkinson's.

“It is creating hundreds of jobs and an entirely new industry for western New York so let's get at it,” Cuomo said in his State of the State address. The effort is part of the governor's pledge to spend $1 billion to revitalize Buffalo, but he also called on lawmakers to cut the corporate tax in upstate New York to zero. “You cannot beat zero my friends,” he said. Elsewhere he wants to reduce New York's corporate tax rate to 6.5 percent, from 7.1 percent.

Governors of both parties also are proposing to reduce taxes or red tape on businesses, with the hope that employers will hire and expand more.  For example:

In Michigan, which once had the country's highest unemployment rate, the labor force is growing for the first time since 2006. Now Republican Gov. Rick Snyder wants his state to look beyond U.S. borders to build a more diverse, educated workforce.

Snyder wants the federal government to set aside 50,000 visas for immigrants with advanced degrees to come to Detroit during the next five years under a special visa program. The U.S. government, which would have to approve the plan, has never set aside a certain number of visas for a particular area.

“If I say the words Dow, Meijer, and Masco, we think, those are Michigan, right? Every one of those three companies was created by an immigrant. We need to encourage immigration in our state,” Snyder said, referring respectively to the chemical giant, supermarket chain and building supply company.

Snyder also has created the Michigan Office for New Americans to encourage the estimated 25,500 foreign students who are getting advanced degrees from Michigan colleges and universities “to stay and grow companies and employ Michiganders,” rather than going back to their home countries right away.

Each year in the U.S., more than 50 percent of the doctorates in science, technology, engineering and math are awarded to international students.

In manufacturing alone, as many as 600,000 positions remain vacant because employers can't find skilled workers, according to one industry estimate. To combat that in his state, Delaware Gov. Jack Markell, a Democrat, is rolling out a two-year program in manufacturing technologies for high school juniors and seniors.  Idaho Gov. C.L. “Butch” Otter, a Republican, also wants more funding for advanced manufacturing.

At the federal level, President Barack Obama has tapped Vice President Joe Biden to lead an across-the-board review of the hodgepodge of 47 federal job training programs, which fall under the auspices of nine different agencies and cost an estimated $18 billion annually. But states are already taking a look at their own programs.

Apprenticeship programs, which received zero dollars in Iowa's 2013 budget, would get $1 million in 2015, under a plan from Iowa Gov. Terry Branstad, a Republican.

Indiana's Pence wants to redirect the money the state already spends on job training. “Let's make sure that adults who have a high school degree get the skills they need to get back on their feet by repurposing current job training dollars to help adult workers get high-wage, high-demand jobs available today,” Pence said.