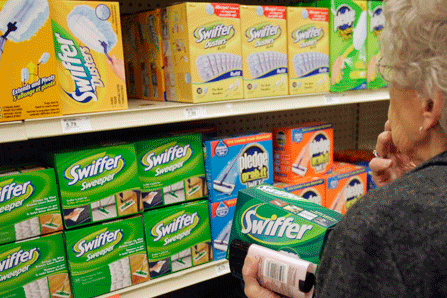 A shopper in Omaha, Neb., checks out Swiffer products. The U.S. textile industry is making a small resurgence making yarns and fibers for products such as Swiffer, diapers and towels. (AP)

American workers might have made the mop you waltz around the kitchen floor, your favorite bath towel or your facial wipes. Surprised? Decades after many people thought the U.S. textile industry was dead, the industry generated $54 billion in shipments in 2012 and employed about 233,000 people.

Business is on the upswing as Southern states, in particular, woo textile companies with tax breaks, reliable utilities, modern ports and airports and a dependable, trained and nonunion workforce.

The workers produce yarn, thread and fabric for apparel, furnishings, home products and industrial use. Examples include Huggies and Pampers diapers, Swiffer mops and Pledge furniture wipes, according to David Rousse, president of the Association of the Nonwoven Fabrics Industry.

About 650 textile plants closed between 1997 and 2009, draining thousands of jobs and depressing communities.

But rising wages in China and other countries, combined with higher transportation costs and tariffs, have prompted foreign and domestic companies to consider American manufacturing sites. Also, with more consumers looking for the “Made in the USA” label, some companies are turning to American goods. Wal-Mart, for example, pledged last year to buy $50 billion over a decade in American-made products, among them towels and washcloths.

More than a third of all textile jobs were located in Georgia and North Carolina in 2012, and that's where many of the jobs are being created. The new plants are nothing like the dusty, noisy mills of the past.

“Norma Rae would have trouble getting a job,” said Godfrey, the college dean, referring to the 1979 movie about a young textile worker who leads a union-organizing campaign. The movie was based on the story of Crystal Lee Jordan, a 33-year-old mother of three who was making $2.65 an hour folding towels at a North Carolina mill in 1973 when she began an organizing push.

“But if Norma Rae wants to sit at a computer terminal and program the robot, that's different. It's a very different world,” he said.

Another change in the industry is the growth of nonwovens, which are fiber-based products made of fabric that's compressed, heated or tangled, like felt. Diapers and facial wipes, mops, medical scrubs and all kinds of filters are nonwovens. In the last decade, North Carolina has gained 1,945 jobs making nonwoven products and $719 million in nonwoven factory investment.

“It's not your grandmother's textile mill,” said economist Ted Abernathy, whose four grandparents worked in textile mills while he was growing up in North Carolina. The long-time executive director of the Southern Growth Policies Board until it merged last fall with the Southern Governors' Association, Abernathy now is a consultant to the governors' group.

Tom Croteau, Georgia's deputy commissioner for global commerce, said the state's long history of carpet manufacturing has been essential to growing its textile industry. In 2013, five floor-covering manufacturing companies announced expansions that will add 3,550 jobs to the 22,382 existing carpet- and rug-manufacturing jobs and a $815 million in investment in Georgia.

“A primary building block of Georgia's business climate is our highly skilled workforce,” Croteau said. Helping train those workers is Georgia's Quick Start program, which began as a modest training program in1967 and has since provided customized training to more than 325,000 workers in more than 3,100 businesses and industries.

In October, Shrivallabh Pittie Group, a leading textile manufacturer in India, chose Georgia as the site of company's first U.S.-based manufacturing facility, a $70 million cotton yarn plant in Screven County that will hire 250 people. The firm will locate on an industrial site developed by the state and its workers will  receive Quick Start training.

“North Carolina has a historically strong manufacturing base, in textiles especially,” Decker said. “The notion of a culture of textile manufacturing – people know it's still there.”

The state offered grants totaling $4.4 million to the nine textile companies to create jobs. The largest in the group is Gildan Activewear, a Canadian firm that has committed to invest $250 million and hire 500 workers. Gildan received a $3.5 million state Job Development Investment Grant, a cash grant based on actual job creation.

One challenge these days is getting young people interested in textile factory work, she said. One mill owner has started bringing middle school students in for tours to show them how technologically advanced the facilities are.

In Lancaster County, S.C., textile mills owned by the Springs family were dominant employers for 120 years, with about 11,000 workers in the 1970s and 1980s. The family sold the company to a Brazilian company in 2005, and the last mill in South Carolina closed in 2007, taking the remaining 3,500 jobs to Brazil.

“It left a crater,” said Keith Tunnell, president of the Lancaster County Economic Development Corporation. “Then the recession came – a double hit.” Unemployment soared to 18.6 percent in June 2009.

About 21 months ago, the South Carolina Department of Commerce told Tunnell that a cotton spinning company was looking for a U.S. manufacturing site. “I was stunned,” he said. Even more surprising: The company is Chinese.

Competition for the plant among the states ended in December when Keer Group announced it will invest $218 million to build a 230,000-square-foot yarn factory and create 501 jobs within five years in Lancaster County.

“We chose to locate our first U.S. facility in South Carolina for a number of reasons, which include the state's workforce, proximity to cotton producers and access to the port” in Charleston, said Keer chairman Zhu Shanqing, according to news reports.

The Keer jobs are nowhere nearly enough to replace the old textile jobs, but are welcome news in a county of 79,000 where the unemployment rate is 8.1 percent.

Tunnell hopes to attract more Chinese companies. What can he share with other state and local officials?

“If any community that was hit as hard as we were is looking to Washington, D.C., to fix your problems, you're wasting your time. Tip O'Neill said all politics is local,” Tunnell said, referring to the late speaker of the U.S. House of Representatives from Massachusetts. “I say all economic development is local.”