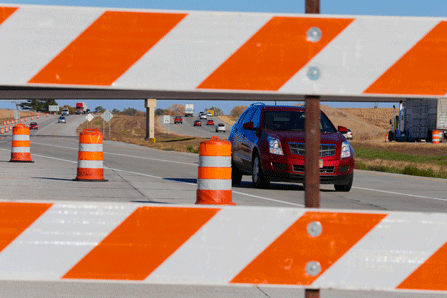 Traffic passes by orange construction barriers on Interstate 80 in Nebraska last year. Several states this spring are looking for money to pay for road improvements and other transportation projects. (AP)

Transportation advocates who want more state spending on roads and rail have reasons for both hope and fear in state capitols.

The hope springs from last year's big breakthroughs in states such as Massachusetts, Pennsylvania and Virginia, where lawmakers boosted transportation spending after being deadlocked for years. Maryland, Ohio, Vermont and Wyoming also passed significant transportation packages. And many states have money to spend for the first time since the Great Recession.

The reasons for fear, however, are more numerous. Gas taxes are losing their buying power. Federal funding is uncertain. Plus, most governors and legislators are in re-election mode, which makes passing tax increases difficult.

Amid that uncertainty, infrastructure funding is shaping up to be a major issue this year in Delaware, Iowa, Oregon and Washington. It also could pop up in other states. A large coalition is pushing the issue in Minnesota. The Wisconsin transportation secretary has suggested raising new road revenues as part of a larger tax overhaul. And New Hampshire legislators could revive last year's debate over whether to use revenue from gas taxes or new casinos to improve state roads.

In the states that approved transportation packages last year, governors played a key role. They made it a top legislative priority, kept pressure on lawmakers and often accepted big compromises to make a final deal.

In Virginia, then-Gov. Bob McDonnell, a Republican, started by calling for the elimination of the state's gas tax, in exchange for a hike in the sales tax. Massachusetts Gov. Deval Patrick, a Democrat, asked for an increase in the state income tax.

Neither governor won approval of his preferred funding source, but both states ended up approving significant transportation packages. Virginia's $6 billion package included a small hike in the sales tax, higher fees for hybrid vehicles and a swap of a retail gas tax for a wholesale fuel tax. Massachusetts legislators passed an $800 million package that Patrick had vetoed, but the governor called it “a step forward.”

Because fewer governors are putting transportation funding at the top of their legislative agendas this year, it seems less likely there will be major transportation breakthroughs.

Still, there are two governors who are backing gas tax increases this year: Jack Markell of Delaware and Jay Inslee of Washington, both Democrats. And Oregon Gov. John Kitzhaber, also a Democrat, wants lawmakers to find money for a new Columbia River bridge to neighboring Washington.

Last week, Markell proposed a 10-cent per gallon increase to the state's gas tax, which would be indexed to inflation.

Like many governors, Markell has been looking for ways to keep his state's transportation network working smoothly, even as money to pay for improvements has been eroding.

For the last two years, Markell and his administration have tried to squeeze more road money out of the state budget. The transportation department cut back on consultants, reduced overtime and limited use of employee cellphones. It kept operating expenses flat and paid down debt. The state has used money from the sale of unclaimed property to boost its transportation budget.

But it has not been enough. The state will have to put off 55 infrastructure projects this year if no more money is found, Markell said. They include road construction, train station rehabilitation and pipe replacements.

So the governor asked for the gas tax hike, which would cost a typical Delaware motorist $57 a year.

“We have asked DelDOT (the Delaware Department of Transportation) to labor under a funding process that has been broken for more than a decade,” he said. “The costs of not fixing it are real in terms of projects delayed, jobs not created, safety compromised and economic growth hindered. Now is the time to repair the situation.”

Politically, Markell is in a safer position than many of the legislators he is trying to convince. His second term expires in three years, and he is barred from running again. But every seat in the Democratic-controlled House is up for election in November, and Democrats are trying to keep control of a narrow majority in the Senate.

The governor tried to downplay the political dynamics in his announcement. “When it comes to funding transportation, there are no Democrat bridges or Republican roads,” he said.

One thing that may help sell the plan is the fact that the nearby states of Maryland, Pennsylvania and Virginia all passed fuel tax hikes for transportation last year, said Geoff Sundstrom, a spokesman for the Delaware Department of Transportation.

A bridge collapse last May along Interstate 5, a major commercial route connecting Washington state to Canada, put the condition of the state's infrastructure in the national spotlight.

But Gov. Inslee has not found a way to get a gas tax hike through the state Senate, which is controlled by a coalition of Republicans and conservative Democrats. A measure failed last summer, and lawmakers could not reach a deal during a special session late last year.

The governor pressed the Senate to find a compromise when he addressed lawmakers in his State of the State speech last month. “The goal cannot be for everyone to get everything they want. Instead, we must get agreement on what our state needs,” he said.

The price tag is not the only thing that has state lawmakers skittish. They are wary of giving more money to the state's transportation department in light of recent troubles at the agency.

A tunnel boring project for a new highway under Seattle ground to a halt for nearly two months, when the massive drill unexpectedly hit a pipe. Meanwhile, the cost of a new pontoon bridge linking Seattle to its eastern suburbs jumped $170 million because of engineering errors.

Inslee insists the agency has been changing since he took office last year. He pointed to the fact that department engineers built a temporary replacement for the collapsed bridge in 27 days and a permanent one 66 days after that.

“There are legacy problems the team at DOT still wrestles with, and I understand some of you are frustrated with that. You know what? So am I. But we can't let issues on megaprojects stop us from moving forward,” he told lawmakers.

The transportation impasse in Washington is also causing consternation in the Oregon Capitol.

Oregon legislators last year approved borrowing $450 million for a replacement bridge on Interstate 5 that would span the Columbia River between Portland, Ore. and Vancouver, Wash. But Washington legislators never approved funding for the northern state's share of the project. Objections to including light-rail tracks on the bridge helped sap support for it in Olympia.

Now Oregon's Kitzhaber wants his state to take the lead in building the bridge without Washington's help. He told legislators they could make the financing work with a combination of funds from Oregon, the federal government and toll revenues.

But Kitzhaber said legislators must act this session, which ends in March, or he will kill the project. Lawmakers, particularly in the Senate, are wary of moving ahead without the support of Washington's legislators.

In Iowa, the missing piece for a transportation funding deal is the support of Republican Gov. Terry Branstad.

A House panel moved ahead with a proposal that would eventually raise the state's gas tax by 10 cents a gallon last week. After the vote, Branstad would not indicate whether he supported the idea. “I am not ruling anything in or ruling anything out,” he told reporters.

Branstad, who recently announced his plans to run for a sixth term as governor, has been reluctant to support a gas tax. He asked his transportation secretary to come up with alternatives, but those options—raising taxes on fuel used in farm machinery and increasing the cost of vehicle registrations—also proved unpopular.

Advocates say the state needs $215 million more a year to keep up the state's road network.