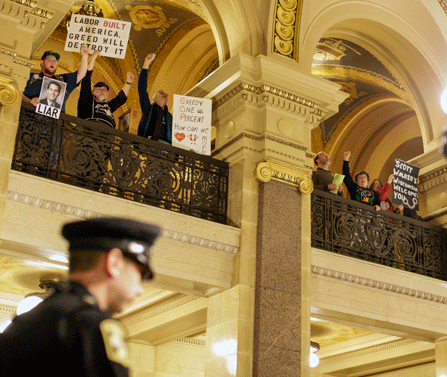 Protestors demonstrate in the Wisconsin Capitol during Republican Gov. Scott Walker's State of the State address. Walker is one of many governors seeking tax cuts as state economies improve. (AP)

Relatively rolling in dough for the first time in half a decade, governors are calling for tax cuts, increased spending on education and infrastructure, or filling up “rainy day” funds. Some are getting pushback from an unusual corner — lawmakers of their own parties.

It's routine for members of the opposition party to take issue with governors' budget, tax and other proposals. This year, optimistic economic news is leading members of governors' own parties to salivate at the thought of addressing priorities which might not line up with the chief executive's.

Sometimes it's more, or fewer, tax cuts. Sometimes it's putting priorities on programs like education. Sometimes it's saving more — or less — for the future: In Alabama, for example, Republicans are questioning Republican Gov. Robert Bentley's proposal to increase teacher salaries, preferring instead to add a cushion to the rainy day account.

State tax revenues have risen an average of 6.7 percent in the fiscal year ended June 30, 2013, according to Moody's Analytics. Part of that is due to a one-time shift of tax payments in late 2012 to avoid potentially higher federal taxes in 2013. That shift impacted 2013 as well, adding to the flush state coffers, along with rising income taxes generally.

An examination of 50-state data by The Pew Charitable Trusts shows that for the first time, total state tax revenue appears to have recovered from its plunge in the Great Recession. Receipts for the 50 states combined were 0.5 percent higher in the second quarter of 2013 than at their peak in 2008, adjusted for inflation.

The extra money is making governors and legislators a bit starry-eyed.

In Wisconsin, for example, Republican Gov. Scott Walker is making tax cuts his top priority. In his State of the State address last month, Walker called for property and income tax cuts totaling half a billion dollars over the next year and a half. “What do you do with a surplus?” he said in the speech. “Give it back to the people who earned it. It's your money.”

Not so fast, said Republicans in the state legislature, which is controlled by the GOP.  Senate Majority Leader Scott Fitzgerald said that despite the increased tax collections, the state faces a $725 million projected deficit for the 2015 two-year budget cycle and tax collections would have to grow 1.5 percent to make up the difference.

While revenues are projected to increase 4.3 percent by mid-2015, he urged caution about tax cuts. In addition, the votes may not be there in the legislature for such a steep cut.

“Several senators within the (Senate GOP) caucus have expressed concerns about increasing the structural deficit,” Fitzgerald told Stateline. “While we are extremely supportive of the governor's effort to cut property and income taxes and return surplus funds to the taxpayers, we must first ensure that future obligations do not hamstring the legislature heading into the next biennium.”

Lawmakers in Wisconsin, reflecting concerns in other states around the country, are hearing from constituents about earlier cuts in education and the state workforce, which many believe should be addressed. On the Wisconsin Public Radio show “Central Time” late last month, callers accused the Republican majority of balancing the budget on the backs of state workers and teachers.

Those sentiments were reflected in a Marquette Law School poll, which director Charles Franklin said showed “unease” with tax cuts. The poll, taken after news broke that revenue projections for the state were up but before Walker's speech, found that Wisconsin voters would most like to see reductions in property taxes, rather than income taxes or sales taxes, but they see any tax cuts as benefiting the rich.

Those numbers open the door to modification of Walker's proposal, Franklin said.

“I think this is a very interesting development, given how central a role tax cuts have played within the Republican Party, both in legislation and campaigning, at least since Ronald Reagan,” he said. “At the very least, you have to take seriously this evidence of a building assessment that (tax cuts) benefit the well-off rather than being broadly based.”

Only 63 percent of those polled in a national survey by the Pew Research Center in January thought that reforming the nation's tax system was a high priority, down from 72 percent a year ago. The economy, jobs, fighting terrorism and education were cited as higher priorities.

Intra-party discord over fiscal priorities is not just among Republicans. California, Massachusetts and New York — all controlled by Democrats — are also seeing disagreements. All told, there are 37 states where the governorship and the legislature are under the same party control, and that's where intra-party disagreements are the greatest and most significant.

In California, Democratic Gov. Jerry Brown talked about the “California comeback” in his State of the State speech. But he urged prudence, calling on members of the Democratic-controlled legislature to “pay down our debts and remember the lessons of history.” He called for “a solid rainy day fund, locked into the constitution” and for a $1.6 billion deposit into the fund this year.

But Senate President Pro Tem Darrell Steinberg, a Sacramento Democrat, disagreed about making a large rainy day fund deposit. While paying into the reserves is a good idea, he suggested that other priorities also merit attention — and spending.

“We must invest in the people of California,” he said, “especially those living in the economic margins. I've proposed and remain committed to a balanced framework of ‘a third, a third, a third,' where we divide the surplus into reserves, repayment and reinvestment.”

Daniel J.B. Mitchell, distinguished professor of public policy at the UCLA School of Public Affairs, said that no Democrat in the legislature “is going to denounce the Brown budget, but what you get is ‘we kinda like this concept of rainy day funds and paying down the debt and living within our means. …But on the other hand, we have cut a lot of money out of the schools so we have to do more now,' or whatever the pet project happens to be.”

According to Pew Charitable Trusts research, only half of the states expected to have enough of a financial cushion to cover at least 20 days of operating expenses in fiscal 2013. States are building up these reserves, but the median number of days was still 21 fewer than prerecession level in fiscal 2007.

Meanwhile in New York, Gov. Andrew Cuomo and New York City Mayor Bill de Blasio, both Democrats, are squabbling over tax increases versus tax cuts. Cuomo touted $2 billion in tax cuts in his State of the State speech, including lowering corporate taxes and property taxes. At the same time, he said the state has enough money for universal prekindergarten statewide.

But de Blasio has called for increasing taxes on city residents who make more than $500,000 annually to fund prekindergarten for all city kids. He needs legislative approval for his plan. These competing proposals will land on the legislature's docket in the coming months.

And in Massachusetts, Democratic Gov. Deval Patrick wants $97 million in new taxes to fund programs, including early childhood education and health care. Those taxes would expand the 5-cent deposit on soda to juice drinks and water, plug loopholes in business taxes, and apply the sales tax to candy and soda, which are currently not taxed as “food.” He also is calling for using $175 million from the state's $1.2 billion rainy day fund.

But his plan was met with coolness in the state legislature.

“The $97 million, that's for the members to decide,” said Stephen Brewer, Democratic chairman of the Senate Ways and Means Committee. He noted that the issue of expanding the bottle deposit is scheduled for a referendum vote in November, so “the legislature probably will not act on that.”

As for the candy and soda sales tax, “in the context of health it's good; in the context of higher taxes, it's troubling,” he said. He recalled that last year the legislature rejected $1.9 billion in proposed tax increases, noting “and that was a nonelection year.”

He said drawing down the rainy day fund might hurt the state's bond rating, which is among the highest in the country now.

“Budgets are about choices,” said Brewer, who's retiring after 35 years as a lawmaker. “We don't have the Bureau of Engraving and Printing at the statehouse (to print money). We'll have two to three months of vetting (by members) here, which is the way John Adams set it up. So, we'll see.”