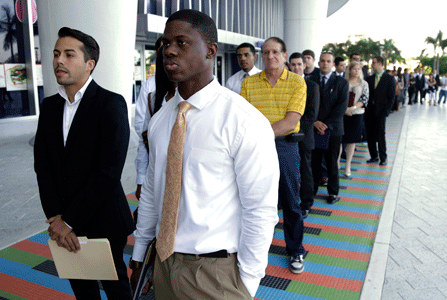 Luis Mendez, left, and Maurice Mike wait in line at a job fair held by the Miami Marlins in Miami last October. In Florida, New Jersey and the District of Columbia, nearly half of the unemployed have been out of work for more than six months. (AP)

In 28 states, a third or more of the unemployed have been without a job for six months or longer, leaving them with no unemployment insurance safety net following the expiration of extended benefits in December.

In New Jersey, Florida and the District of Columbia, nearly half of the unemployed have been out of work for longer than 26 weeks, according to an analysis from the Economic Policy Institute of data from the U.S. Census Bureau and Bureau of Labor Statistics. Among all 50 states and D.C., the average is 33 percent.

Before the Great Recession, the highest the long-term joblessness share ever reached was 26 percent in mid-1983, according to the EPI analysis. Today, 41 states and D.C. have shares of long-term unemployment above that level.

To see the full state-by-state data, how many state residents have already been affected by the cuts and how the benefit expirations might affect states' economies, see Stateline's data visualization.

The prevalence of long-term unemployment nationwide and in many states underscores the arguments safety-net advocates and many on both sides of the aisle in Congress made for extending the benefits before they expired.

Started during the George W. Bush administration in 2008, the extended benefits program was a response to a spike in long-term unemployment during the recession. Since it began, it has paid jobless benefits funded entirely by Washington to at least 24 million Americans at a cost of $252 billion through the first half of 2013.

They expired in December in the midst of last year's broader budget deal in Congress and because of disputes over how the benefits would be paid for. Congress has been working on how to extend them, and President Barack Obama this week called for lawmakers to reach a deal, but so far no agreement has materialized.

During the recession, unemployed workers could collect benefits for up to 99 weeks, depending on a state's unemployment rate, thanks to the program. When it expired, unemployment insurance payouts mostly defaulted to the standard 26 weeks nationwide, meaning anyone who has been collecting help but remains out of work longer than that will no longer receive any aid.

The impact on the jobless will be especially severe in the Republican-controlled states that have slashed standard unemployment aid in recent years, reducing the length of assistance to levels not seen since the Social Security Act established the program in 1935.

Florida, for example, now offers 19 weeks of benefits to the unemployed, while Georgia offers 18. South Carolina, Missouri, Arkansas and Michigan have also reduced the number of weeks available. North Carolina is a special case because the state not only cut its standard benefits program to 19 weeks, but also earlier this year opted out of the extended benefits program entirely – the first and only state to do so.

The expiration of benefits not only affects states' unemployed workers, but their broader economies as well. The program sent more than $25.6 billion in entirely federal dollars to states in 2013, and varying estimates have said the expiration could cost as many as 300,000 jobs nationwide.