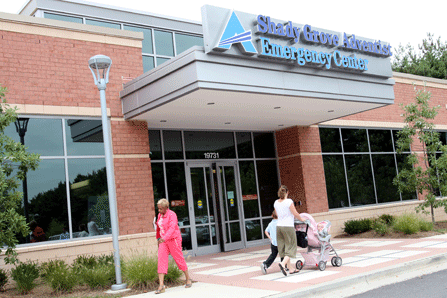 Shady Grove Hospital's stand-alone emergency center in Germantown, Md., opened in 2006. Under a new plan designed to cut costs, Maryland's hospitals will be less likely to build such new facilities or expand their services in other ways. (Getty)

Instead of drumming up more business with big-name doctors, stand-alone emergency departments and high-tech equipment, Maryland hospitals this year will do the unthinkable: strive to admit fewer patients.

The federal government earlier this month approved a first-of-its-kind regulatory scheme in Maryland that aims to reduce spending on hospital services, which are the most expensive form of health care. The plan uses financial incentives to push hospitals to work with doctors outside their buildings to keep people healthier. In approving Maryland's Medicare waiver, the U.S. Department of Health and Human Services said the plan could be a model for other states.

The hope is that hospitals will, for example, hire doctors to work in nearby nursing homes to prevent chronically ill residents from ending up in the emergency room. Hospitals also are expected to collaborate with independent physicians in their communities to help chronically ill patients manage their diseases, thereby avoiding hospitalization.

But even its biggest proponents admit the new financial scheme will be tough to pull off.  “This is the right thing to do for our patients and communities,” said Carmela Coyle, president and CEO of the Maryland Hospital Association. But Coyle said achieving the new goals will be challenging, because the concepts have never been tested on such a large scale.

Maryland is the only state that sets uniform hospital prices for all insurers. At every Maryland hospital, everyone pays the same price for the same services. It's been that way since 1974.

Other states, including Massachusetts, New York, New Jersey and Connecticut, started regulating hospital prices around the same time, but abandoned the practice once managed care organizations began to spread in the early 1980s. The thinking was that managed care companies with a financial interest in keeping costs down would control hospital spending.

“We have this unique payment system and tools that other states just don't have,” said Joshua Sharfstein, Maryland's secretary of health and mental hygiene. “Our goal is to use those tools to address the fundamental challenge of getting better health outcomes at lower costs.”

A key ingredient of the state's regulatory scheme is a 36-year-old waiver from the federal government that allows Maryland to set its own reimbursement rates for Medicare, instead of following the rates for the country as a whole. This new plan replaces that waiver and requires the state to cut total Medicare costs by $330 million over the next five years. The waiver also requires Maryland to reduce its hospital readmission rate and cut hospital-acquired infections and other preventable conditions by 30 percent.

If the state succeeds, it can continue setting its own Medicare rates, which are higher than those in other states. If not, it may lose its waiver, causing the state's $16 billion hospital industry to lose about $1 billion per year in Medicare payments.

The Affordable Care Act promotes the same overall goals as Maryland's new plan: lower costs, better care and improved health.  The ACA offers incentives for hospitals to voluntarily set up “accountable care organizations” under the Medicare program. Instead of charging for every service, hospital-based accountable care organizations receive “global payments” based on the health outcomes of their patients. They're rewarded for keeping people healthy, not for performing more services.

Maryland's hospital plan will operate in a similar way. But it is much broader. It includes all health care payers – not just Medicare – and nearly all hospitals in the state are expected to join.

“It's the ultimate in population-based medicine,” said Robert Murray, who headed the state's hospital regulatory agency for 17 years.  “It gives each hospital a pot of money and tells it to do everything in its power – not just the things that are reimbursable – to keep everybody healthy.”  It's a radical move away from the traditional fee-for-service payment system to one that everyone agrees is better for patients and the overall economy, he said.

Under the plan, each Maryland hospital will be given a budget, based on its historic revenue levels, to care for a defined number of people in its community, regardless of the number of actual admissions or the severity of the cases. “When a hospital is on a budget, it naturally has an incentive to provide fewer services and avoid waste,” Murray explained. “That's a 180-degree turn from the current model.”

One concern is that the new financial incentives could induce hospitals to make it harder for people to be admitted or stop offering certain services that result in costly admissions. The new plan includes quality standards and other safeguards to ensure that doesn't happen.  Hospitals are so closely regulated in Maryland, experts say, there is little chance such actions would go undetected.

For the five-year waiver period, Maryland intends to limit the overall growth of per capita inpatient and outpatient hospital costs to 3.6 percent, the state's historical per capita gross state product growth.

Participation in the program is not mandatory, but most hospital CEOs in the state have vowed to take the leap, in part because a small-scale test of the model – called Total Patient Revenue System – has proven successful over the past three years in 10 of Maryland's 46 hospitals.  Revenue growth slowed but profits increased as the participating hospitals focused on keeping people in their communities healthy enough to stay out of the hospital.

Sharfstein says the difference is noticeable when you walk into Western Maryland Regional Medical Center, one of the 10 participating hospitals. “It's the anti-gravity deal for health care,” he said. “It is very quiet. Only 60 percent filled.”

Since Western Maryland signed up for the program in 2010, admissions have gone down and profit margins have gone up, said chief financial officer, Kim Repac. Before the program, the hospital's operating profit was consistently 2 percent. In the first full year of the program, it had a 2 percent loss. But by the end of the second year, its profit margin had increased to 5 percent. This year it is on track to hit 8 percent, according to Repac.

In the next few weeks, hospitals will have to declare whether they're in or out.  If a hospital chooses not to adopt the new “global budget” scheme, its per patient costs will be capped, as in the past, and its growth will also be limited.  If revenues exceed historical levels, the state will dock future profits by lowering the hospital's allowable per patient cost. Some hospitals may choose to transition into the new model over the five-year period, Coyle said.

To give hospitals an added boost, Democratic Gov. Martin O'Malley included $30 million in grants in this year's budget and $40 million in each of the next four years to help states set up the information technology and new staffing they will need to make the plan work.  If approved by the legislature, hospitals will be able to apply for grants immediately, Sharfstein said.

Health policy experts describe Maryland's strategy as the boldest cost-containment plan ever attempted. “Everyone is moving in this direction,” said health care economist Len Nichols of George Mason University. “Maryland just jumped way ahead of the curve.” Massachusetts enacted a broad cost containment law in 2012 with similar goals, but it has no enforcement mechanism. Vermont is also attempting to standardize hospital rates for all payers, but has not yet financed the effort.

But some are skeptical. “It's a big risk,” said Joseph Antos, a health care policy analyst at the conservative American Enterprise Institute. “It's like asking hospitals to slowly choke off their own revenues.” Antos, who served on Maryland's regulatory commission from 2004 to 2012, agrees with the state's goals. “It would be a great thing if it worked,” he said, “but I have my doubts.”

Health policy expert Robert Berenson of the Urban Institute questioned whether hospitals will have the ability to limit the number of people who are admitted. Typically physicians, not hospitals, decide who is admitted. Independent physicians also order other expensive hospital services, such as imaging and laboratory tests. “How do you get hospitals together with doctors who don't set foot in the hospitals?” he asked.

In Maryland, as in most states, an increasing number of doctors work in practices that are owned by hospitals.  For those physicians, hospitals may offer financial incentives to keep people out of the hospital. Now, most hospital-paid physicians get bonuses for admitting patients.

Hospitals are also expected to collaborate with other health care providers, including community health clinics and independent physicians. “It's all about building relationships,” said Coyle. “We need to better understand patients' care paths, which go well beyond the walls of the hospital.”

As revolutionary as it is, Maryland residents aren't expected to notice any change in the way their local hospitals operate.  But regulators and hospitals hope consumers ultimately will see lower insurance premiums and patients will experience higher quality care.  On deck is a plan to regulate expenses outside of hospitals: In three years, Maryland can apply for another Medicare waiver to cover independent physicians and other health care providers.