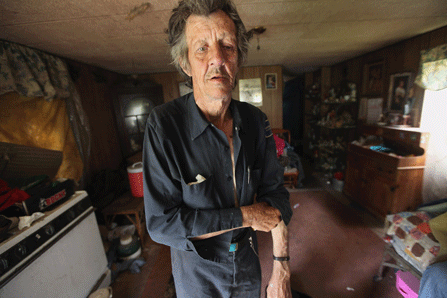 Former chimney sweeper Mose Noble stands in his trailer, which lacks electricity or running water, in Owsley County, Ky. Five decades after President Lyndon Johnson declared the War on Poverty, the national poverty rate has declined, but Kentucky and other states that were relatively poor in 1964 remain so today. (Getty)

The War on Poverty has alleviated some of the economic despair that existed when President Lyndon Johnson declared “all-out war on human poverty and unemployment in these United States” in January 1964. But many of the states that were among the poorest decades ago remain so today, even as safety-net programs have benefited millions of Americans.

The average poverty rate among the states was 24 percent in 1959. But some were in much worse shape than others: Mississippi's rate, for example, was 54.5 percent then. The rate in Arkansas was 47.5 percent, and in South Carolina it was 45.4 percent. Fifteen states had official poverty rates of 30 percent or higher, according to the 1960 U.S. Census. That year the official federal poverty level was an annual household income of $2,973 for a family of four, or $23,800 in today's dollars.

By 2012, the average poverty rate among the states had plummeted to 14.3 percent as measured by the Census' Current Population Survey. But outliers remain, according to a Stateline analysis, and many are the same problem states from 1959: Mississippi still has the nation's highest poverty rate, at 22 percent. Arkansas also remains above average at 20.1 percent.

Experts say that in some regions, the same factors that caused poverty decades ago persist today. Among them are a less-educated workforce, lower rates of health insurance, low participation rates in safety-net programs and long distances to major cities and metropolitan areas with plentiful jobs.

“You have these persistently poor regions,” said James P. Ziliak, director of the Center for Poverty Research at the University of Kentucky, whose research has found 11 percent of all U.S. counties have had persistently high poverty rates (defined as 20 percent or higher) for decades, many in the South.

“There has been some catch-up over the decades,” Ziliak said. “It just hasn't been enough.”

Some states that were better off in 1959 remain so today. Connecticut's poverty rate in 1959 was 9.6 percent, the only state below 10 percent. In 2012, its rate was 10.3 percent – no longer lowest in the nation (New Hampshire, at 8.1 percent, held that distinction), but among the lowest. Others have seen vast improvement: Minnesota's 1959 rate was 19.3 percent, for example. Today it's 10 percent.

Stateline analyzed once-every-10-years poverty data from the 1960, 1970 and 1980 Census surveys, and then looked at state-by-state poverty levels from 1980 to 2012 from the Current Population Survey, the only annual measure of poverty done by the federal government before 2000. It differs slightly from the American Community Survey, which the Census began in 2000. State poverty levels by this survey from 2008 to 2012 are shown here. Click here for a full explanation of the differences between the two methods. 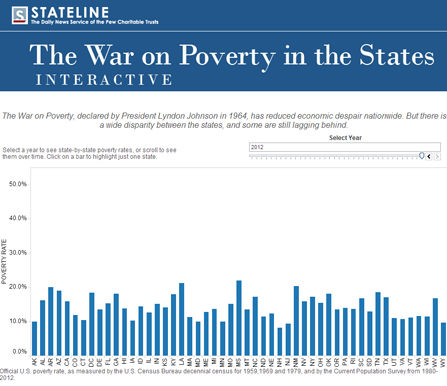 The Census Bureau's official poverty rate is based solely on income. It doesn't factor in the cost of living, which differs significantly from state to state.  Nor does it include the effect that tax credits and safety-net programs — some with roots in the War on Poverty — can have on a household's bottom line.

A supplemental measure the Census began using recently paints a fuller picture, by factoring in cost of living and the availability of government assistance. Nationally, it shows a similar poverty rate, but some states with low official rates have a higher rate under the supplemental measure, which is an average of rates from 2010-2012. California, with its high cost of living, is worst at 23.8 percent by the supplemental measure, more than 7 percentage points higher than its official rate. New Jersey and Florida also see their poverty rates jump by more than 4 percentage points, to 15.5 percent and 19.5 percent, respectively.

For a fuller picture of how the two poverty rates differ by state, see Stateline's previous data visualization exploring those numbers here.

Even with this adjustment, some of the same states that had elevated levels of poverty in 1959 are still poor. Taken together, the dual measures paint a complicated picture of the effects of the War on Poverty.

A few factors could explain why: The two states rank in the top 10 nationally for share of population under 65 years old without health insurance, according to Kaiser Family Foundation data.  Both states also have slightly lower levels of educational attainment for residents than the national average, according to Census figures.

On the other hand, some of the states that were poorest in 1959 and today appear much better under the supplemental measure, underscoring how safety-net programs can keep families above the poverty line. 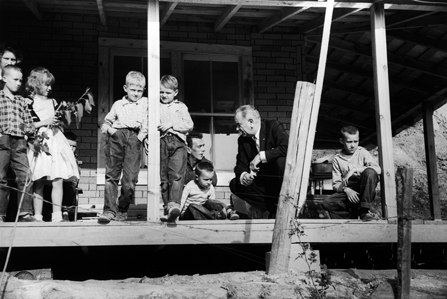 President Lyndon Johnson on the porch of a home in Inez, Ky., on April 24, 1964. The president visited the Appalachian area in Eastern Kentucky to see poverty there firsthand. Five decades later, progress has been made, but some states are lagging behind. (Getty)

Poverty experts and advocates for the safety net credit programs that prop up family incomes. The Census, for example, has said 5 million more Americans would have been considered poor in 2012 without food stamps, a program that was part of the War on Poverty, not to mention other safety-net benefits.

“We're doing the best we can to fight poverty, and we're doing a pretty good job,” said Timothy Smeeding, director of the Institute for Research on Poverty at the University of Wisconsin, who says that debates about the War on Poverty should focus on the broader measure and benefits of the safety net.

The biggest success, experts say, has been in combatting poverty among the elderly, thanks in large part to creation in 1965 of Medicare and Medicaid. In 1959, 35 percent of those 65 years or older were in poverty by the official measure, according to the Census. In 2012, that number was 9 percent.

Olivia Golden, executive director of the Center for Law and Social Policy, called that alone a “big, unquestioned accomplishment” of the War on Poverty, while noting that much of the effort has come at the federal level. Help for younger demographic groups, however, tends to come at the state level, she said, and because of that the progress from 1959 to today is more mixed.

More than 25 percent of Americans younger than 18 years old in 1959 were in poverty, according to the Census. Today, that rate is 21.8 percent. “State policy matters most for children,” Golden said. “To some degree, we make progress, but we also have to keep working on the same challenges.”

Another factor in the ebb and flow of poverty rates since 1959 is a state's susceptibility to the broader economy.

Cynthia Zwick, executive director of Arizona Community Action Association, placed much of the blame on the burst housing bubble and recession, which has stressed community programs for the poor.

“Many of them are now seeing families coming through their doors that are working but they're not making enough to make ends meet,” she said, saying there's one major agency in Phoenix that can help only one out of every 11 Arizonans that comes to it for help.

Indiana, too, illustrates the fallout of the Great Recession and the impact the broader economy can have on a state. In 1959, Indiana's poverty rate was 17.5 percent, but it plummeted to an annual average of 12 percent between 1960 and 2008, including nine years in the single digits between 1995 and 2003. Since 2008, though, the state's official rate has averaged 15.5 percent.

That dynamic will continue to matter, Kneebone said, as states and cities recover unevenly from the recession. The downturn added millions of Americans to the rolls of safety-net programs and left many in or on the verge of poverty.

“Eventually we'll start to see these numbers move in the right direction,” Kneebone said. But, she added, “Clearly where you live makes a difference.”