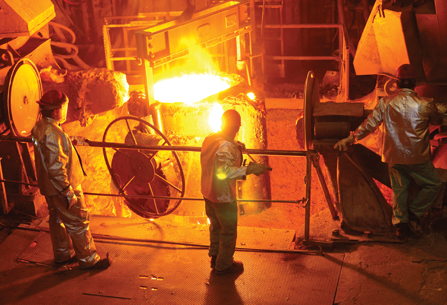 Workers like these at ESCO Corp. last year participated in a work-share program that prevented layoffs at the Portland-based company, which makes parts for oil and gas industries. The U.S. government is giving states $100 million for work-share. (Credit: ESCO Corp.)

State legislatures must act this year or possibly lose their share of $100 million from the federal government to create “work-sharing” programs, which allow employers to reduce workers' hours rather than resort to layoffs.

Work-share programs have existed since the 1980s, but the Middle Class Tax Relief and Job Creation Act of 2012 marked the first time the federal government offered states grant money to help set up such programs and to pay for benefits.

“It's a phenomenal program that should be available in every state,” Gay M. Gilbert, administrator of the U.S. Department of Labor's Office of Unemployment Insurance Employment and Training Administration, said during a recent conference on work-sharing programs.

Of the 26 states and the District of Columbia that have created work-share programs, 18 conform to the 2012 legislation and thus are eligible for federal grants, but are still working through the formal approval process at the Labor Department. The grants range from $11.6 million in California to $202,000 in Vermont (see map). The Department of Labor declined to identify the 18 states, as conversations with the remaining states are ongoing.  As of today, no state has yet received any of the $100 million.

States face a Dec. 31 deadline to get their application to the Department of Labor to be able to collect their allotment of the $100 million. “It's an unprecedented amount of money,” Gilbert said.

More than 501,000 layoffs were averted and jobs saved since 2008 through work-share programs, according to the Labor Department. All told, some 8.8 million jobs were lost during the 2007-2009 recessions.

Work-share programs differ from job sharing. The latter allows two part-time employees to share one full-time job.  Work sharing allows a full-time worker's hours to be reduced, in lieu of being laid off. It also enables businesses to retain skilled workers, even if just part-time.

Work-sharing is voluntary, so employees can choose whether to participate if their companies offer it.

The program is technically  “short-time compensation” since workers who agree to have their hours cut collect a portion of their lost wages though the unemployment insurance program. The $100 million set aside for states is to help set up and promote the programs. It is separate from the program that reimburses states for the benefits.

"Instead of getting a pink slip during an economic downturn, workers now have an opportunity to stay on the job and receive unemployment benefits for the hours they lose," Republican Gov. Scott Walker said when Wisconsin approved work-share legislation last year.

Another provision of the Middle Class Tax Relief and Job Creation Act of 2012 allows states to get reimbursed 100 percent for the benefits that are paid through their work-share programs through 2015. More than $173 million in federal money has gone to 20 states to pay for benefits since October 2012.

The program may have won bipartisan support, but it still has its critics. In Indiana, for example, some policymakers have raised concerns that a work-share program could drain the unemployment insurance trust fund, even though the federal government has offered to pay for the benefits for up to three years.  During the recession, many states' unemployment insurance funds ran out of money, and states had to borrow billions of dollars from the federal government to cover jobless benefits.

The conservative Heritage Foundation has said “European work-sharing programs have done nothing to increase employment” and won't work in the United States.

But Derek Thomas, a senior policy analyst with the Indiana Institute for Working Families, said he is “extremely disappointed” his state has not enacted work-share legislation. His group has researched and lobbied on the issue for three years, calling the program “our nation's most effective job destruction prevention program.” Indiana's jobless rate is 6.9 percent.

Organized labor largely supports work-sharing as long as the state laws include a requirement that employers get the union's approval before launching such a program, if workers are represented by labor. All but three states include this union sign-off. The three states that do not are Minnesota, Ohio and Wisconsin. 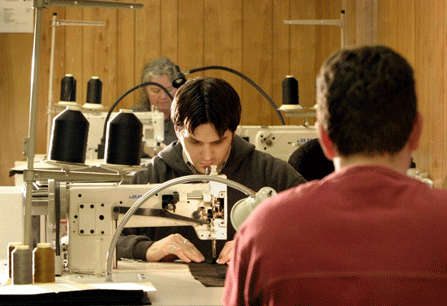 Rhode Island, which has the country's highest unemployment rate at 9.1 percent, figures its work-share program saved nearly 14,000 jobs between 2007 and 2010, a period when the state lost 36,600 jobs.

“Imagine if those 14,000 jobs went away and we were approaching more than 50,000 jobs lost,” said Charles J. Fogarty, director of the state's Labor and Training Department.  “That would have had a devastating impact” on the state's economy. Without the program, he said the state's unemployment rate in 2010 would have reached 12.2 percent, rather than 11.7 percent.

In Oregon, ESCO Corp. last year contemplated laying off some of its 1,000 workers in Portland when global demand for mining equipment decreased. Instead, the company said the state's work-share program allowed them to reduce some workers' hours instead of eliminating any jobs.

“We make some products that are not made anywhere else in the world,” said Teresa Hogan, the human resource manager at ESCO. “Retaining that talent is really important … Work-share is a perfect way to do that.”

Mark Soycher, an attorney with the Connecticut Business & Industry Association, calls work-sharing “a poorly publicized program but very well-received once companies learned about it.” He said the state's labor department has acted cooperatively with firms and responds quickly on the paperwork.

Lisa Maxim, a human resources manager at Oregon Aero Inc., a small company in Scappoose, Ore., that makes headsets, helmets and cushions for military pilots, said the turnaround time for getting the paperwork back from the Oregon Labor Department is typically 48 hours. “It's so easy to use. You check off a couple boxes” on a one-page form and scan it to the labor department. “The lack of red tape is reassuring for everyone.”

Maxim said her company used the program when the federal sequestration hit her company. “Oregon Aero hasn't laid off a single person during our difficult economic downturn.”

Once employers understand how it works, “the program sells itself,” said Neil Gorrell, unemployment insurance director in Washington state. Work-share is not just for bigger employers. In his state, for example, 37 percent of the firms using work-share have 10 employees or fewer, Gorrell said.

As states work to minimize the amount of forms employers have to file to participate in work-share, they face their own federal red tape to get programs approved.

“There is a lot of paperwork involved,” said Gorrell of Washington state's UI program. He said his staff has responded to at least four rounds of follow up questions and requests for more detailed information from the federal government.

“Our program is one of the oldest and best run,” he said. “I would speculate that the effort required to get a less established program and grant approved would be a significant reason there aren't more approvals out there.”

At the same time, Gorrell said he recognizes the federal government's position. “While it has consumed a great deal of staff time, with the scarcity of funds available in the system, I do understand why (the U.S. Department of Labor) is being so careful."