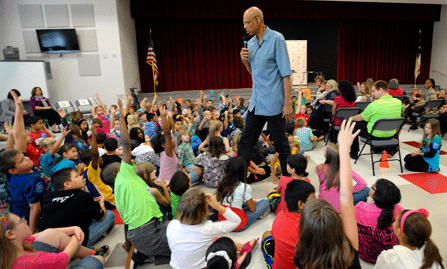 Slightly more fourth graders nationwide are reading proficiently compared to a decade ago, but only a third of them are now reading well, according to a new report. The study also found the reading skills gap between children from lower-income and higher-income families has grown, and proficiency varies considerably across states.

Students in all but six states have improved reading proficiency, according to the report by the Annie E. Casey Foundation, which used reading scores from the National Assessment of Educational Progress, also known as the Nation's Report Card, to compare reading skills of fourth graders in 2013 and 2003.

Maryland, the District of Columbia and Rhode Island saw the biggest gains, while reading levels declined in Alaska, Michigan, South Dakota and West Virginia. Reading proficiency remained level in Connecticut, which had the highest percentage of fourth graders reading proficiently in 2003, and in Montana.

Still, the range of reading skills across the states was striking. The proportion of fourth grade students reading proficiently last year ranged from 21 percent in New Mexico and Mississippi to 57 percent in Massachusetts.

“The gap between Mississippi and New Mexico and Massachusetts is pretty huge,” said Laura Speer, the foundation's associate director for policy reform and advocacy. “Just looking at that component across the country can tell you a lot about the economic vitality of those places and how educated their workforces are going to be.”

But Speer warned that the numbers also described a more complex picture, with some states that fared well on average showing among the highest disparities in reading between students from lower-income and higher-income families.

The study found the income-based reading gap grew in most states, jumping by more than 30 percent in 12 states and the District of Columbia. The District of Columbia, Hawaii and Tennessee saw the biggest increases in the income-based reading gap. The widening reading gap is attributable to students from higher-income households making much more progress in reading than students from lower-income households.

About 30 states have adopted measures geared to increasing reading proficiency by the third grade, according to Ralph Smith, managing director of the Campaign for Grade-Level Reading, a collaboration of nonprofits, foundations and communities. In Florida, a new law requiring schools with the lowest reading test results to add an extra hour of instruction beginning in 2012-2013 appears to have helped improve reading scores.