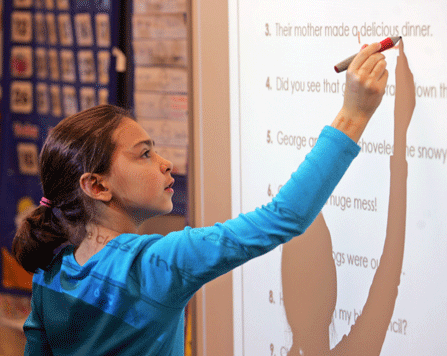 A third-grader works on her classroom's Smart Board during a grammar lesson at Freeman Elementary in Freeman, S.D. Common Core is being used in South Dakota classrooms, but critics in that state and others have raised questions about the tests associated with the new standards. (AP)

Beginning in March, more than four million students will serve as guinea pigs for the English and math tests for the Common Core, a set of standards adopted by almost every state that map out what students should know and be able to do in each grade.

Ultimately, Common Core tests will be used to assess both students and teachers, and they are critical to the larger mission of the standards: to increase academic rigor for all students and to allow states to better evaluate their students and compare them to those in other states.

The testing that will take place starting in March will serve as a dry run for the two groups of states that have banded together to develop Common Core tests, the Smarter Balanced Assessment Consortium and the Partnership for Assessment of Readiness for College and Careers (PARCC). In most states, the real Common Core tests will begin in 2015.

But as controversy over the Common Core has challenged some states' commitment to the standards, a number of states have decided to withdraw from PARCC or Smarter Balanced or to use alternative tests, raising questions about the cost of the tests and the long-term viability of the multistate testing groups, which received $360 million in federal grants to develop the tests. The federal grants will end this fall, and it is unclear whether the testing groups will continue past that point.

“What gets tested is what gets taught,” said Joan Herman, co-director emeritus of the National Center for Research on Evaluation, Standards and Student Testing at UCLA. “To the extent that the assessments well represent the spirit and meaning of the standards, the spirit and meaning of the standards will get taught. Where the assessments fall short, curriculum, instruction and teaching will likely fall short as well.”

Controversy over the Common Core heated up last year across the country. Critics from both ends of the political spectrum cited a variety of complaints, including the fear of federal control over education, questions about whether Common Core is superior to previous state standards and worries about the implementation of the standards, including the cost to states and school districts.

So far, none of the 45 states that adopted the English and math standards has dropped them (Minnesota adopted only the English standards). But several states have backed off from using the tests created by the two multi-state testing groups or ended their participation in the collaborations.

“Cost is an issue because it takes money to innovate,” Herman said.  “You can't just do that with no resources, you have to be able to invest in research and development and in the development and testing of new forms of assessment.”

“They are moving us forward in addressing deeper learning to solve problems and to think critically,” Herman said. “No doubt some folks don't think they're far enough, but in my mind, they're definitely an important step forward and will provide much better targets for instructions than do most existing state tests.”

Historically, most state standardized tests have focused on the knowledge and skills that are relatively simple to test and don't reflect a great depth of learning, said James Pellegrino, co-director of Learning Sciences Research Institute at the University of Illinois at Chicago and a leading expert on student assessment.

Pellegrino said that because every child is now tested every year from third through eighth grades and once in high school, and because the tests must be secure, new test items must be generated constantly.

“You get into a mode of mass production and mass production doesn't always get tuned to the highest levels of quality,” Pellegrino said. “It's not like you couldn't do it, but it's very costly to produce high-quality assessments on an ongoing basis with the sort of scope and scale” used in the U.S.

States that try to cut the cost of tests too much could pay the price, Pellegrino warned. “If we have shallow tests because we're trying to economize, teachers will respond to the test because they're held accountable for performance on the test,” Pellegrino said. “As a consequence, they won't teach to the standards, they'll teach to the test.”

From the beginning, Smarter Balanced and PARCC have promised smarter tests that will evaluate how well students apply knowledge. Instead of multiple-choice questions, for example, students might be given “performance tasks,” or groups of test questions designed around a common theme and built to assess more complex skills.

Jacqueline E. King, a spokeswoman for Smarter Balanced, said that in addition to end-of-the-year exams, Smarter Balanced will offer a package of materials including ways to assess student learning throughout the school year, along with extensive resources for teachers, such as model lesson plans.

On the end-of-year exams, King said high school students might be asked to imagine being a staff member in a congressman's office. The congressman has asked the staffer to write a short memo explaining the pros and cons of nuclear power and provide a recommendation on what position the congressman should take, including the justification for the recommendation. The student would be given background materials to read and would need to evaluate the credibility of the background materials before constructing a cogent, concise argument.

David Connerty-Marin, a spokesman for PARCC, said the group's tests will have several advantages over most current state standardized tests. They will, for example, make it easier to evaluate students who are significantly above or below grade level. They also will evaluate reading and writing scores at every grade (currently, few states test writing at every grade level) and gauge whether students are on track to be “college ready” when they graduate from high school.

In Michigan, which has seen its share of controversy over the Common Core, Joseph Martineau, the deputy superintendent for accountability services, said the Smarter Balanced exams offer multiple advantages over the current state standardized test, the Michigan Educational Assessment Program (MEAP). Smarter Balanced will allow schools to get results in two weeks, compared to about six weeks for the state's current standardized test, for example. And because the Smarter Balanced exams are different for each student, with computers adjusting the difficulty level of questions based on students' responses, they can also be administered over a longer period, whereas the previous state tests had to be administered on a single day to prevent cheating.

On the MEAP, students might be asked to choose a correct answer from four possible options, whereas on the Common Core test, they would be asked to explain how they arrived at their answer.

“One of the major differences between the two is the depth of knowledge that we're asking students to demonstrate,” Martineau said.

Martineau said that by working with the other states in Smarter Balanced, Michigan was able to develop a higher-quality test than it could have created independently.

“We would not have been able to afford to develop the kind of quality that was developed through the consortium,” he said.

Matthew Chingos, a researcher at the Brown Center on Education Policy at the Brookings Institution, estimates that even if several of the states where the Common Core has stirred up a lot of debate withdraw from the testing collaborations, the cost of the tests would increase at most by a few dollars per student. He concludes that given that U.S. schools spend about $10,500 per student annually, worrying about whether a test costs $15 or $45 to measure how much a student is learning “seems almost silly.”

Some point out, however, that the nature of the Common Core exam makes it more expensive than a typical test.  Theodor Rebarber, CEO of AccountabilityWorks, a nonprofit that supports accountability and assessment systems, said cost projections should include expenses such as additional computers and the expanded bandwidth necessary for the Common Core exams.

“There are a lot of hopes that online assessment would lower costs but what we're seeing here is the testing costs from the consortia are not particularly low,” Rebarber said. He advised states to examine whether the Smarter Balanced and PARCC tests are really innovative, and how much they will actually cost states to implement.

Some argue policymakers should take a step back and reconsider the larger question of why we test students at all, which will in turn drive changes to the tests.

Pellegrino, of University of Illinois at Chicago, co-authored a policy statement by the Gordon Commission on the Future of Assessment in Education urging “a fundamental shift in thinking about the purposes of assessment.”

“Many of us believe we need to rethink some of this – it's not that we don't need to use assessments to monitor how well students are learning, but most of that should be targeted at the classroom level for supporting the teaching and learning process and not be so much a part of a high-stakes accountability system,” Pellegrino said.