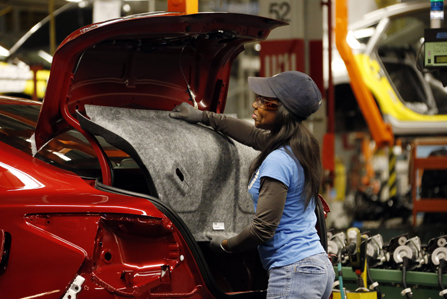 A Nissan employee tacks in the trunk lining of an new Altima sedan chassis at a plant in Canton, Miss. The difference between men and women's wages varies widely by state. (AP)

Female workers don't need to be told what numerous studies have concluded: Women, on average, are paid less than men, even when they are doing the same job. But where workers live also makes a difference.

On average, women made an average of 80.9 cents for every dollar a male earned in 2012, according to recent statistics from the Bureau of Labor Statistics. But from state to state, the numbers vary dramatically. Female workers in Wyoming, for example, earn just 65.5 percent of what men earn, worst of any state. In the nation's capital, women fared best and are nearly at parity, making 94.8 cents on the male-earned dollar.

There is no clear regional or political pattern: Arkansas women experience a narrower gender gap (15.9 cents) than women in New York (17.1 cents), for example.

The reason for the differences, experts say, is a complicated and sometimes contradictory set of conditions, ranging from the states' dominant industries to labor union status and the percentage of workers earning the minimum wage.

And they caution that the gender gap number doesn't tell the whole story. Women might make less than men in Connecticut, for example, but a female worker there earns a median salary of $868 a week compared to a man's median earnings of $1,127. In areas where financiers and lawyers are prevalent—like Connecticut— salaries between the genders, while higher, are more disparate.

In states where there are a lot of minimum-wage jobs, men's and women's pay are likely to be closer. An Arizona woman might take solace in the fact that she earns about 87 percent of what men in the state earn, but on average, she's earning just $670 a week.

What Can States Do

Equal pay-related legislation was introduced in 11 states in 2013, according a summation prepared by the National Conference of State Legislatures for Stateline. A few examples:

Median weekly salary for men, and percent that women earn for the same job.

Why such disparity between states? “It depends on the job structure and the industry'' in each state, said Claudia Williams, a research analyst at the Institute for Women's Policy Research in Washington, D.C. Wyoming, for example, has a lot of mining and cattle industry jobs dominated by men, Williams said, noting that some are family businesses in which some of the women are unpaid or paid low salaries.

The same holds true for West Virginia, where mining is a dominant industry, said Anne York, a business professor and gender equity specialist at Meredith College in Raleigh, N.C. ``Anytime you have a (predominance) of something like heavy industry, you're going to see men congregated in good-paying jobs. And if a state or locality has an abundance of those types of jobs, you're going to see a greater pay disparity,” she said. Women earn 72.6 percent of what men do in West Virginia.

In Arizona, meanwhile, women make 86.8 percent of what men earn. The state has large numbers of population-growth driven jobs like construction or maintenance that are male-dominated but not well paid, said Dennis Hoffman, professor at the W. P. Carey School of Business at Arizona State University. ``Women dominate financial services, education, medical services, etc., which likely are jobs that pay a bit more. So it is likely industrial mix coupled with occupational choice,'' Hoffman said.

Unionization is also a factor – though it can cut both ways. The District of Columbia leads the nation in gender parity on pay, and that is largely due to the preponderance of government jobs, where salaries are tied to a union-negotiated pay scale, said Catherine Hill of the American Association of University Women, which tracks the gender gap on an ongoing basis. The BLS report showed that women in unions make 88 percent of what men earn, compared to 80.8 percent for women not represented by organized labor.

Government jobs are more likely than private-sector jobs to pay men and women equally, she said. But while union membership tends to raise the pay of low-income workers, ``it also tends to flatten wages, so (while) we don't see as much difference (in pay) in the unionized workforce,'' incomes are lower overall than in many non-unionized fields, Hill said.

For example, Nevada women make an average of 80.7 cents to a male worker's dollar, close to the national average. That is in part due to the impact of the Culinary Workers Union, which represents casino employees. But Nevada women, many of whom work in the lower-paid, service-sector jobs in Las Vegas, still earn a median of $620 a week, less than the $691 national average.

The minimum wage also dictates where women rank, said Fatima Goss Graves, vice president of education and employment at the National Women's Law Center. Women make up a ``supermajority'' of minimum wage jobs, and in states where service-sector jobs and other minimum wage positions are more prevalent, women end up earning less on average than men, she said. Conversely, Goss Graves added, the NWLC's analysis shows that in six of 10 states and the District of Columbia where the gender gap is narrower—Arizona, California, D.C., Florida, Maine, Nevada and Vermont— the minimum wage is higher than the national law requires.

However, women in higher-paying fields don't necessarily fare better compared to men, even though their paychecks are higher than those of minimum wage workers, Goss Graves said. For example, Connecticut women make just 77 cents for every dollar a male resident makes, and that may be because well-paid men commuting to law or financial services jobs in New York City make a lot more than their (still well-paid) female counterparts.  The BLS backs her up, reporting that women in management and professional fields make 71.6 cents for every dollar men in the same fields make.

Some of the disparity might be due to women's own choices, said Emily Goff, an analyst with the conservative Heritage Foundation. If women choose to go into lower-paying fields (like secretarial work), they will logically make less than men, she said. And for women who leave the workforce temporarily to raise families, they miss out on the seniority and job continuity that make for higher pay, Goff said.

``They're going to opt to choose jobs that have more flexible schedules'' so they can spend time at home with children, Goff said. ``It kind of frustrates some people who would like to mandate equality, but you can't ignore biological facts.''

Pay equity activists are looking to the states to help close the gender gap. For example, New Mexico has an executive order (issued by the previous governor, Democrat Bill Richardson) that gives state contractors extra points in bidding if they can show their pay gap is narrower. The rule has not been fully implemented, said Martha Burk, an equal pay expert who wrote the executive order for Richardson. But the city of Albuquerque is moving ahead with its own version of the rule, Burk said, and other states have called her wanting to replicate the idea.

Some business groups are wary of tightening equal pay laws, saying they could hamstring growth. Texas industries successfully lobbied Republican Gov. Rick Perry to veto state legislation that would have been similar to the federal Lilly Ledbetter Fair Pay Act, which extends the time employees can sue for gender discrimination.

``You can go back forever – there's no statute of limitations. We just think that's an unfair burden,'' said Bill Hammond, president and CEO of Texas Association of Business. 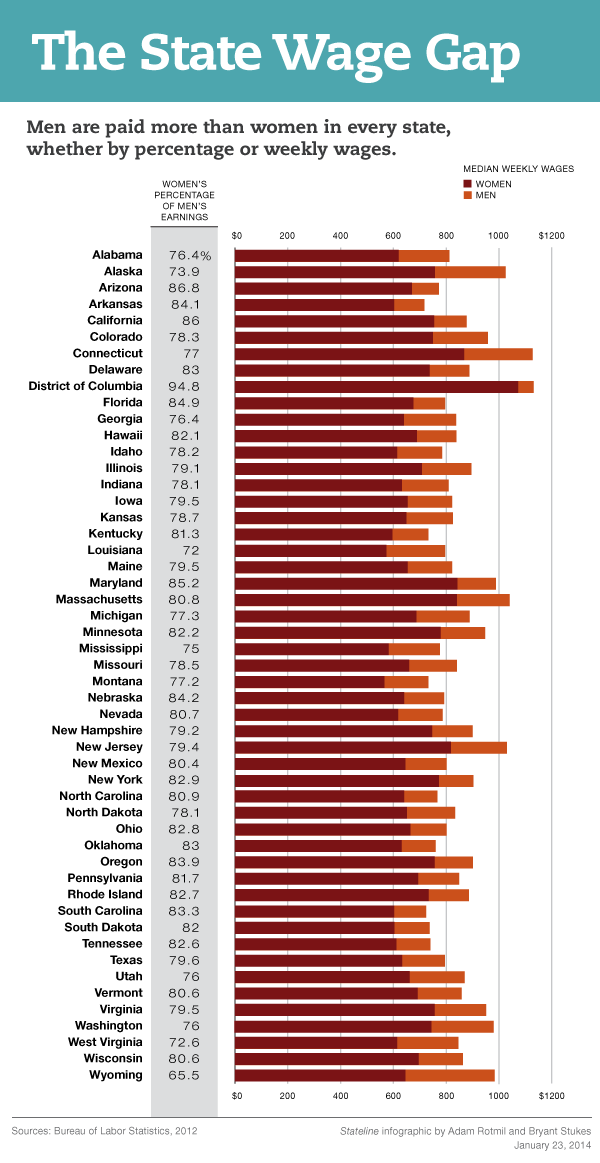