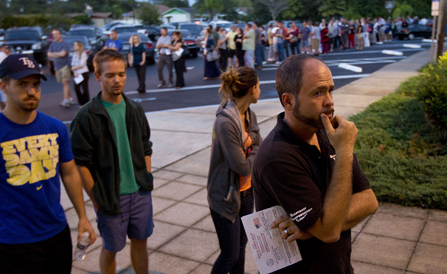 Voters stand in line at a polling place in Fort Myers, Fla., in 2012. A new report recommends expanded early voting and other measures to cut down on waiting times. (AP)

Local elections officials across the U.S. should expand early voting, allow online registration and do a better job enforcing federal election laws, according to a new report by a presidential panel charged with recommending fixes for election problems that have plagued American voters.

Some of the recommendations in the 70-page report, which was presented on Wednesday to Vice President Joe Biden at the White House, are in sync with changes states are already making. In Florida, for example, where “hanging chads” entered the American lexicon in 2000 and there were long lines at polling places in 2012, lawmakers recently reversed a shortening of the early voting period and simplified ballots.

The moves by Republican-controlled Florida are part of a broader trend. For several years, Republicans in many states pushed laws designed to make voting more difficult, arguing that such restrictions were needed to prevent voter fraud. In the last two years, however, states controlled by both parties have expanded or eased access to the polls, in some cases by pursuing strategies included in Wednesday's report. Last year, for example, lawmakers in GOP-controlled Virginia created an online voter registration system.

However, Virginia also approved a stricter voter ID law—stepping into one of the most contentious election-related issues. The Presidential Commission on Election Administration declined to weigh in on whether voters should have to show photo identification at polling places, though it called on states to educate voters about what they will need to cast their ballots.

Just last week, a state judge in Pennsylvania struck down that state's voter ID law, saying it was an unconstitutional burden on voters lacking proper IDs. However, other court rulings have upheld voter ID laws in other states.

Lawyers Ben Ginsberg and Robert Bauer, who chaired the panel, said their “aim was to transcend partisan divisions and view election administration as public administration that must heed the expressed interests and expectations of voters.”  Ginsberg was counsel to Republican Mitt Romney during his presidential campaigns, and Bauer served in the same role for President Barack Obama. Obama issued an executive order last March creating the commission.

The report notes that presidential elections involve as many as 8,000 different jurisdictions, which “makes uniformity challenging.” However, it decries the uneven application of federal election law. For example, it cites lax compliance with the so-called Motor Voter Act, which aims to allow people to register to vote when they get their driver's licenses. Some states' failure to fully enact that law has spurred lawsuits. To address the problem, the report calls for better training and more oversight of election administrators.

The report also calls on states to share data from voter registration rolls and best practices, both to limit inaccuracies and to improve systems nationwide. It also says states should beef up training for poll workers, which can vary wildly between states and even among different areas within a single state.

Addressing the most visible problem associated with Election Day – and the one that spurred the commission in the first place – the report says no voters should have to wait in line longer than 30 minutes, a goal that would be a significant improvement over the hours-long wait some have experienced during high-turnout elections in states such as Florida, Virginia and elsewhere.

Online voter registration and early voting can ameliorate that problem, according to the report. Early voting is increasingly popular, according to a recent analysis by the Pew Charitable Trusts (which funds Stateline). The analysis found that in 2012, as many as half of the votes in a number of key states were cast before Election Day.

“The United States electoral system remains a work in progress, as it has for more than 230 years. Each election reveals weaknesses in the system, which leads to calls for reform, followed by discoveries of different problems,” the report concludes. “There has never been a perfectly run election in the United States or elsewhere, and perhaps there never will be.”