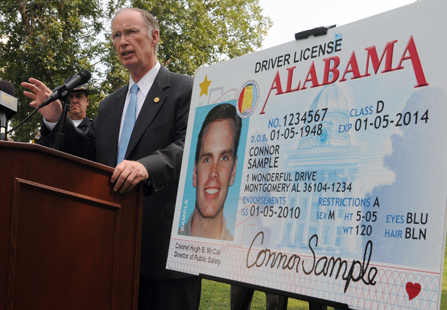 Alabama Gov. Robert Bentley, a Republican, discusses his state's STAR I.D. driver's license, which complies with the federal Real ID Act. Alabama is one of 15 states that meet the requirements of the law, which the federal government will slowly start enforcing in April. (AP)

Nearly a decade after Congress passed the Real ID Act to thwart terrorists from getting driver's licenses, the law will finally go into effect in April. But 13 states still are not ready.

The U.S. Department of Homeland Security repeatedly put off enforcement of the law, as states complained about its costs and civil rights groups objected to it as an invasion of privacy. But in December, while DHS was temporarily headed by counterterrorism expert Rand Beers, the agency unveiled a gradual rollout for enforcing the law.

Brian Zimmer, president of the Coalition for a Secure Driver's License, which supports Real ID, praised the agency for its “deliberate approach.” The slow ramp-up will give the agency time to address practical problems and avoid technical or training snafus before the requirements affect the general public, he said.

“Nobody has ever done this before… so enforcing this law is going to be a major challenge,” said Zimmer, who helped draft the law's provisions on driver's licenses as a congressional committee staffer.

But Chris Calabrese, a lawyer for the American Civil Liberties Union, said the new timetable will do little to convince holdout states to comply with the law.

“Nothing has changed,” he said. “It is impossible to imagine DHS keeping the citizens of any of those states off of airplanes…I don't see that most of these states are going to have a whole lot more incentive than they have ever had to do this, which is to say, none.”

Another 15 states do not yet meet the requirements but have asked the federal government for more time to do so. They all have extensions through October and can renew those extensions.

Soon after Real ID became law, 17 states passed laws restricting or banning its implementation within their borders, according to the National Conference of State Legislatures. Liberals and conservatives alike recoiled at the law in its early years. They objected to the law's costs, federal pre-emption of state practices and the potential threat to personal privacy.

But two of those states—Georgia and Utah—now issue Real ID-compliant licenses. Seven more are among those granted extensions to comply with the law.

The controversy over Real ID faded in most state capitols as DHS repeatedly delayed enforcement. Technically, the law does not impose new rules on states. But by requiring Real ID-compliant licenses to board commercial aircraft, the law could put a lot of public pressure on states to issue licenses that meet its standards.

In the final report it issued in July 2004, the 9/11 Commission recommended that states improve driver's license security, because four of the 19 hijackers in the terrorist attacks used state-issued driver's licenses to board the planes they later crashed.

The Real ID Act, which President George W. Bush signed into law in May 2005, requires states to verify that an applicant is in the country legally, using federal databases and original documents such as birth certificates and Social Security cards. It also imposes security measures for workers who handle driver's license information or who produce the physical documents.

The federal government has delayed enforcement of Real ID four times since it was originally supposed to go into effect in May 2008.

As those deadlines neared, the law's proponents raised the specter of residents in noncompliant states not being able to board flights with their state-issued identification. New Mexico Gov. Susana Martinez, a Republican, often cited that as a reason to bar unauthorized immigrants from getting driver's licenses there.

The federal government's new open-ended schedule would put off that type of widespread enforcement until the waning days of the Obama administration—at the earliest.

The consequences for residents living in holdout states will be minimal, at least at first. They will have to present alternate forms of identification (such as a passport) to get into Washington, D.C. headquarters of DHS, nuclear power plants and restricted federal facilities.

But sometime after 2016, they will no longer be able to board commercial aircraft with only their driver's license.

The federal government relies on information from states to determine whether they comply with 43 requirements under Real ID. In a statement, the agency said states' progress so far shows that the law's requirements are achievable.

Vermont first started issuing Real ID-compliant licenses at the beginning of this year. Michael Charter from the Vermont Department of Motor Vehicles said his agency gradually put in place more and more security measures over the years to comply.

“It's been easier to accomplish than we initially thought it might be. There really hasn't been tremendous backlash from the public up to this point,” he said.

The state had to add facial-recognition technology to the computers that store photos from driver's licenses. The software alerts workers if a new photo matches one that is already in the database for a different person. DMV employees follow up on the potential matches to determine whether there is any fraud.

The state also had to change how it screens and trains workers who handle driver's license data, Charter said. The agency lets police and prosecutors use the data, but only if they submit requests to the agency with documentation of ongoing investigations. DMV workers run the actual queries.

The biggest change to the physical ID cards is for unauthorized immigrants. Vermont has always required driver's license holders to show they are in the country legally, but the legislature decided last year to grant driving privileges to undocumented immigrants.

So Vermont lawmakers decided to issue two forms of cards: the typical driver's license and a separate driving privilege card for the immigrants. The second card states that the ID is not valid for federal identification or official purposes, so that the state would meet the requirements of Real ID.

In fact, all nine states that passed laws allowing unauthorized immigrants to drive last year specified that cards for those immigrants must have marks to distinguish them from licenses for people in the country legally, according to the National Immigration Law Forum.

Before last year, only three states allowed unauthorized immigrants to drive, and only one of them—Utah—included physical distinctions for the immigrants' licenses. New Mexico and Washington still do not.

Many technical, legal and philosophical obstacles remain for states that have not complied with Real ID.

For many, meeting the law's requirement that states secure the locations where driver's licenses are produced can be challenging. Many states, such as Tennessee, now issue licenses from a single, secure location. That means applicants get their licenses in the mail, rather than at a state office.

The law's many security provisions have prompted states such as California and Texas to consolidate facilities where residents can get driver's licenses, said Zimmer, from the Coalition for a Secure Driver's License.

A legal challenge doomed New Jersey's TRU-ID program in 2012. The ACLU sued to block the state's rollout of Real ID-compliant licenses, because, the group said, the state did not follow state law for getting public feedback before putting its new license rules into effect. New Jersey officials said they would include the public if they try to roll out similar changes in the future.

Ohio officials decided last year to stop work on Real ID compliance, because of privacy concerns. They were especially concerned about storing digital copies of sensitive documents and about the use of facial recognition technology, according to The Columbus Dispatch.

The state's facial recognition technology generated controversy last year, when it came to light that as many as 26,500 people could access the state's database of driver's license photos, far more than in other states.