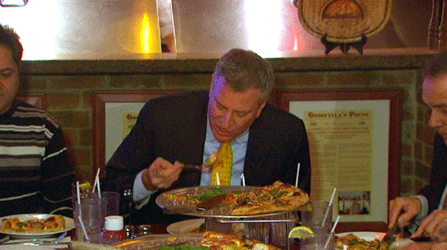 New York Mayor Bill de Blasio eats pizza with a fork in Staten Island, stirring controversy among some New Yorkers. He paid tax on that pizza because it was eaten in a restaurant. If it was uncooked and sold “to go” it wouldn't be taxed in some states, including New York. (AP)

States are grappling with whether sales taxes should be charged for pizzas or other food assembled uncooked in restaurants and sold to consumers who then cook the food elsewhere.

Is that pizza considered prepared food, like that sold by pizza restaurants? Or is it a grocery item, like the frozen pizzas in supermarkets? In most states, food that's sold ready-to-eat is taxed; food sold in the grocery store and cooked at home is not.

That sounds as complicated as the “candy” definition states had to settle. After grappling with that one for years, the Streamlined Sales Tax Governing Board, which attempts to regularize sales taxes among states, decided that candy is defined as something without flour in it, and candy-like items made with flour as an ingredient are defined as “food.”  Most states tax candy or snacks, but not food. So, a Twix bar is food and a Hershey bar is not, at least according to the official tax definition.

That leads back to the pizza issue and Papa Murphy's Take ‘n' Bake Pizza company, which raised it. The company has stores in nearly 40 states with different policies, and wants the issue settled.

Right now, the 24 states that subscribe to the Streamlined Sales Tax Governing Board's guidelines are split on whether to tax the pre-assembled but uncooked pizza sold in restaurants, even though a board committee decided uncooked pizza is prepared food.

It may seem like a small thing. But states are seeing sales taxes decline as more purchases are made on the Internet (most are untaxed) and are looking in usual places for taxes on services or other places for revenue. The “take ‘n bake pizza” debate could be the one of many potential controversial levies on goods and services.

Janet Guenzel, a Papa Murphy's 15-year franchise owner, said taxing her pizza would definitely hurt business. In her letter to the tax board, Guenzel said, “No Papa Murphy's Take & Bake pizza can be consumed in our stores.  We have no ovens!! No tables, no chairs, no eating utensils, no napkins, etc.  The pizza can also NOT be consumed in a customer's vehicle (such as a fast food burger) or any other premise without an oven.”

Another question that hangs in the balance is whether customers can use food stamps to buy the uncooked pizzas. In general, the federal program prohibits using food stamps to pay for prepared food. Guenzel said 40 percent of the business at one of her stores comes from food stamps.

States already tax groceries to varying degrees, according to the Federation of Tax Administrators.

The Tax Foundation, an anti-tax think tank, said the sales tax base on overall goods has shrunk from 60 percent of the U.S. economy in the 1960s, to 30 percent today. As a result, states are looking elsewhere for revenue, including taxing services and expanding the tax on goods.

According to the foundation, 21 states tax repair services, 19 tax landscaping, 18 tax cleaning services, six tax lobbying, three tax legal services and two tax medical services. Uncooked food for purchase is one of those areas states are examining. But what falls into the taxable category and what doesn't?

“It's a very, very, very difficult line to draw,” said Michael Mazerov, senior fellow at the Center on Budget and Policy Priorities, a progressive think-tank which studies state tax issues. “I know this because 16 years ago, I was on (another) multi-state tax commission, and I tried to write a definition of ‘prepared food' that made some sense. It was extremely difficult then and now, with the evolution of the food industry, it's even harder.”

It is unclear how much revenue taxing uncooked pizza would bring to states due to multiple laws governing taxation of food and the varying number of “take ‘n' bake” pizza outlets in the states.

The Streamlined Sales Tax Governing Board defines prepared food as that which is in a “heated state,” contains two or more ingredients combined by the seller, or is sold with utensils. But the interpretation of that definition is slippery.  About half the 24 states that subscribe to the board's guidelines say that definition applies to take-and-bake pizza, and the others do not.

By a vote of six to one, the Compliance Review and Interpretations Committee of the Streamlined Sales Tax Governing Board, agreed that the uncooked pizza met the definition of prepared food and should be taxed. Unsurprisingly, the one panel member who dissented, Dan Noble, director of the Wyoming Department of Revenue, represents a state that doesn't tax the pizza.

“We had conversations with Pizza Hut and some of the other ready-to-eat folks, and they asked why we would allow (uncooked pizza to go untaxed),” Noble said.  “We said if you sell a raw pizza, it's not taxed either.” The recommendation went to the Governing Board. It couldn't decide.

But Indiana, Iowa, Minnesota, Nebraska, North Dakota, Nevada, Vermont and Wyoming do not, Vosberg said.  Ohio exempts all food consumed off the restaurant premises, while South Dakota and Kansas tax both prepared food and groceries, he said.

Of the two remaining states, Georgia's sales tax regulation appears to tax the pizza, although it does not specifically address pizza. Oklahoma taxes all food at 4.5 percent.

“The states that are looking at it as not prepared food, say it's not in a ready to eat condition,” Vosberg said by way of explanation. “The other states say well, it's prepared, even if it's not ready to eat.”

No Decision For Now

Because there is such as split, the board is considering a “toggle rule,” which would allow states to do whatever they please. While it undermines the purpose of the board, it would appear to be the only option at this point.

“The SSTGB did not take any action on the take-n-bake pizza issue during the SSTGB's teleconference meeting held in December,” said spokesman Craig Johnson. “Instead, a workgroup made up of various state and business personnel was formed to draft a proposed toggle amendment to the Streamlined Sales and Use Tax Agreement definition of prepared food.”

The toggle is anticipated to provide states with the option of including or excluding take-n-bake pizzas (and similar products) from the definition of prepared food. The rule will be reviewed at the May governing board meeting, he said.