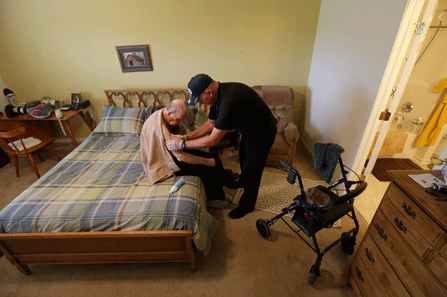 In New Hampshire, Medicaid pays for in-home care for nearly all of its developmentally disabled residents. For frail elders, the opposite is true. Most wind up in nursing homes.

To remedy this imbalance, New Hampshire is taking advantage of Affordable Care Act funding for a program aimed at removing existing barriers to providing long-term care in people's homes and communities.

Known as the Balancing Incentive Payments Program, it is one of several ACA provisions designed to keep as many people as possible out of costly institutions. Arkansas, Connecticut, Georgia, Illinois, Indiana, Iowa, Kentucky, Louisiana, Maine, Maryland, Mississippi, Missouri, New Jersey, New York, Ohio and Texas are also participating in the $3 billion incentive program.

According to a 2010 AARP survey, nine out of 10 older Americans said they would rather be cared for in their homes than in a nursing home. People with mental and physical disabilities, and those who represent them, also have pushed for community-based long-term care options and the ability to live independently in their homes.

States participating in the $3 billion program receive a higher federal match for all of their spending on home and community care through September 2015, provided they reduce the red tape and confusion that caretakers, elders and those with disabilities typically encounter when they attempt to find alternatives to nursing homes.

HHS has approved applications from 17 states

In 2010, nearly two-thirds of nursing home residents had their bills paid by Medicaid. Many low-income older people qualify for Medicaid before they enter a nursing home. But hundreds of thousands of higher-income people also end up in the Medicaid program after they deplete their own resources. According to the U.S. Department of Health and Human Services, the average cost of nursing home care in 2010 was $6,235 per month.

States have had the option of providing alternatives to nursing homes under a Medicaid “waiver” program developed during the Reagan administration.  A major impetus for the change was that Medicaid dollars can support nearly three older people or adults with physical disabilities in their homes for every one person in a nursing home, according to a study by AARP.

Progress has been made over the last 30 years. More people are able to remain in their homes every year. In fact, the use of nursing homes has declined in recent years, despite the growing ranks of the elderly. In 2010, 1.4 million Americans resided in nursing homes, a decline of 4 percent since 2005, according to the AARP study.

But nearly everyone agrees that not enough has been done to give people a choice about where they receive care. Part of the problem is a morass of regulatory barriers under the Medicaid program. The balancing incentives program could eliminate some of them.

Separate from the balancing incentives program, HHS last week published a long-awaited update to its community living waiver rules, with the goal of simplifying the waiver process and eligibility requirements so that more people can receive care outside of institutions.  In general, said Matt Salo, director of the National Association of Medicaid Directors, the federal government is “putting its foot on the accelerator to make more community-based services available.”

Under the balancing incentives program, states must create a so-called “no-wrong-door” approach for people looking for resources to help them keep their loved ones at home. Most people have no idea where to turn when the need for long-term care arises. To make sure people get access to the services they need, Medicaid agencies are charged with training all state and local social services organizations to help them apply. The state also works with hospital discharge personnel to make sure they inform patients about their options for care.

“In New Hampshire that means not turning them back out into the cold,” said Don Hunter, who heads the state balancing incentives program. “Don't just give them a phone number. Make the appointments for them.”

The program also requires states to create a standardized set of eligibility assessments for everyone so that all of their needs can be met, no matter what their age or type of disability.

States must also provide an independent case manager for every person in need – one who does not have ties to a nursing home or any other type of health care service.

To qualify for the incentive program, states must have spent less than 50 percent of their Medicaid long-term care dollars on community-based care in 2009. (See chart below.)

When the program began in 2011, New Hampshire was ahead of most other states. Nearly 50 percent of its spending was on home and community care. Today, community spending exceeds 55 percent, Hunter said.

National advocates for community-based care are watching New Hampshire because it has made huge strides in caring for people with developmental disabilities. At least 99 percent of them are receiving care in their homes and communities, far more than in other states. Many hope the state can make the same kind of progress for elders and adults with physical and behavioral disabilities.

But transferring those policies to older people may not be so easy. Doug McNutt, AARP associate state director for advocacy, says the challenges are very different for disabled adults and older people. “Family members have had an amazing effect. Parents [of kids with developmental disabilities] take it on as a mission and that mission doesn't end when they're 18. With elders, it's not the same.”

Medicaid requires states to provide nursing home beds to those who need it. Waivers for community-based services are optional.  The state can limit eligibility, total spending and geographic availability. Determining eligibility under a waiver can take two months. Eligibility for a nursing home is automatic.

New Hampshire's long-term care waiver for community services is broader than the waiver in most other states.  People don't have to apply for multiple programs to get the services they need. But McNutt said the process needs to be faster. “Families are in crisis, and if there aren't family members around, it's even more likely you'll end up in a nursing home.”

Another impediment to shifting more care to the community is that New Hampshire, like most other states, has a well-established nursing home industry.  The owners of dozens of facilities who employ thousands of workers have a vested interest in making sure they have a steady stream of business.

That issue doesn't exist for people with developmental disabilities. As the result of a lawsuit, New Hampshire in 1991 closed its only institution for people with cognitive impairment—the Laconia State School.  As a result, there was no other option but to find home and community based services for its residents.  “It was like lightning in a bottle,” McNutt said.

Still, state officials deserve credit for creating a smooth transition, said Sue Fox of the University of New Hampshire.  “New Hampshire got ahead of the game and stayed ahead with the developmental disability population. Now the goal is to bring some of those same policies to aging and mental health,” she said. 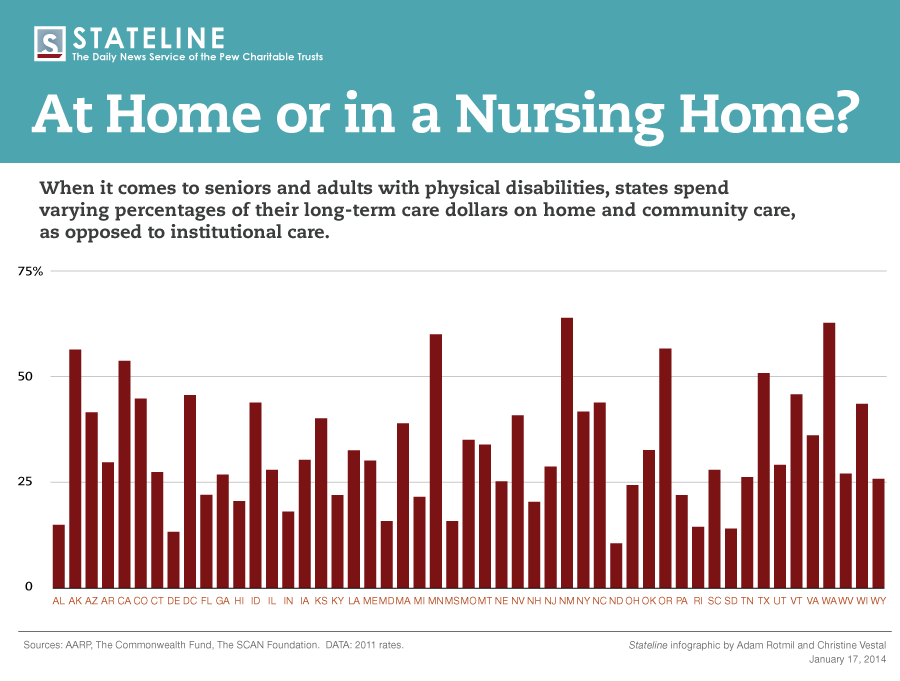