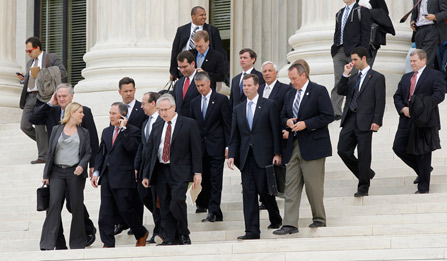 State attorneys general walk down the steps of the U.S. Supreme Court after arguments in 2012 on the constitutionality of the federal health care law. The case was the highest-profile example of states taking their differences before the justices. (AP)

In the Supreme Court's spring 2014 term, a familiar cast will be airing arguments and hashing out their differences before the justices: state attorneys general.

States are increasingly weighing in on disputes that end up before the Supreme Court. A number of upcoming cases have drawn attention from states, even when the facts of the dispute don't directly affect those getting involved.

“The real shift has been in the frequency of state participation in the Supreme Court,” said Stephen Vladeck, a law professor at American University in Washington, D.C. “There's been an uptick in the appearance of inter-state divisions in Supreme Court cases in recent years.”

The rate at which states file briefs in Supreme Court cases has skyrocketed in the last half-century, according to the University of Pennsylvania Law Review. Between 1946 and 1955, for example, states filed briefs in just 4 percent of cases before the high court. By the 1990s, that rate reached nearly 30 percent, and the trend has accelerated in the years since. Part of the increase is because the court hears fewer cases than it used to.

Congressional action, and inaction, has led to some of the cases. States have challenged or leapt out in front of Washington on certain issues, spawning lawsuits in the process, notably on the federal health care law, gay marriage and voting rights.

That has also created deep divides between so-called “blue” and “red” states on some of the most controversial issues of the day — divides which often play out later in court. These legal battles can also be good politics: Many Republican attorneys general, for example, rode their challenge against the health law to national prominence, most notably Virginia's Ken Cuccinelli, who ran for governor last November and lost.

The increasing number of state solicitor general offices is also leading to more active state legal departments. In the mid-1990s, 16 states had solicitor general offices; by 2010, that number doubled. Today, 43 such offices exist, according to the National Association of Attorneys General, which includes the District of Columbia, Puerto Rico and Virgin Islands in its count. In general, solicitors general focus more on appellate cases than the rest of the attorney general's office, representing the state as cases move through courts on appeal.

In the coming weeks, state differences will be on full display as justices consider lawsuits dealing with abortion clinics and free speech, labor union practices and federal greenhouse gases regulation. Stateline looked at three of these cases, the first of which gets a full airing today. Another case on Florida's handling of the death penalty, which Stateline previously covered, will be heard March 3.

The court heard a dispute between abortion rights supporters and free speech advocates today, in a case involving a Massachusetts law that has drawn national attention.

At issue in McCullen v. Coakley is the state's “buffer zone” law, which limits protest activities near the state's abortion clinics, keeping most everyone without business at the facilities at least 35 feet away.

The law relies on a 2000 Supreme Court decision that upheld buffer zone laws as reasonable limits on free speech, and that precedent has become part of the arguments in the Massachusetts case. Both sides note that more than three dozen states have laws restricting activities around election polling places, and that those regulations have gone largely unchallenged.

Those challenging Massachusetts's statute contend that its exception for some people — in this case, workers and patients — is unconstitutional because enforcement affects only those opposed to abortion.

“As a practical matter, the Act primarily, if not exclusively, affects anti-abortion speakers,” those challenging the law argue.  “Unless exempt, speakers are barred from standing in place in a non-obstructive way on public sidewalks inside the zone. It is a crime to enter the zone even to continue a quiet conversation with a willing listener.”

Michigan and 11 other states have filed a brief opposing the law, echoing those arguments, and some free speech advocates have also voiced opposition.

On the other side, New York and 12 other states support the law, as have local officials from San Francisco and other major cities. They say states should have the flexibility to respond to local conditions in ensuring safety for abortion providers, citing long histories threats, violence and general disorder near clinics as justification for the limits.

“All of these buffer zones have been created to respond to the need for protection,” the opposing states argue.

Opponents see an opening thanks to the changing personnel and general conservative tilt of the court in the years since the 2000 buffer zone ruling, during which the justices have embraced free speech arguments and been more open to limits on abortion.

Like most cases before the court, the fallout from the decision will depend in large part on whether the ruling is narrow or broad.

A ‘Sleeper' Case on Labor Law

Both sides agree on one thing in Harris v. Quinn, a case with its roots in Illinois: The Supreme Court's decision has the potential to drastically alter the future of the American labor movement.

The case, to be heard Jan. 21, involves home health care workers paid by the state's Medicaid program who are unionized under the Service Employees International Union.

Some of the workers argue that they shouldn't be forced to pay dues — as all members of a union are, under federal labor law — in part because their unique status as home health care workers means they shouldn't have ever formed a union in the first place. An executive order in 2003 from then-Gov. Rod Blagojevich opened the door to unionization.

The case involves specifics of both federal and Illinois labor law, along with details of the Illinois Medicaid program. But it has drawn attention notably from labor and business interests around the country, in part, because both sides see the potential for a ruling to alter the heart of U.S. labor law.

Fifteen states and the District of Columbia back Illinois in the case, including Minnesota, which has its own federal lawsuit there over similar home health care unionization concerns on hold pending the high court's decision. They say that a long history of law and experience underpin the way unions are handled in the states, and that nothing in this case calls for upsetting the way those interactions have worked for years.

The Obama administration backs Illinois in the case.

On the other side are pro-business groups, specifically the National Right to Work Legal Defense Foundation, which is representing the plaintiffs. They see a violation of the First Amendment in forcing the workers to join and support the union, and they question whether the providers qualify as “public workers” for the purposes of unionizing.

At stake: Established Supreme Court precedents governing mandatory dues and exclusive union representation rights. The decline of labor unions and the possibility that they could tap a rapidly growing health care sector for new members heighten the stakes.

“This case, depending on what the outcome is, could really be the beginning of the end” of the current labor status quo, said Ilya Shapiro of the libertarian Cato Institute, which filed a brief backing the plaintiffs.

Kent Greenfield, a Boston College law professor, has called the case a “sleeper” on the court's docket. “At first glance it doesn't look like it's that big of a deal,” he said. “But the only reason the court would take such a case is that they're trying to do more with it.”

Yet another case dealing with Washington's attempts to regulate air pollution is on the court's docket Feb. 24. This topic has already sparked disputes among the states, most recently over Environmental Protection Agency rules about cross-state pollution.

The case, Utility Air Regulatory Group v. EPA, is part of long-running legal fight involving more than a half-dozen other lawsuits on the limits of the EPA's authority. At issue is whether the agency's power to regulate pollution can require pollution sources such as power plants and factories to get permits for greenhouse gas emissions.

The case involves both broad and narrow questions that could potentially upset years of precedent that allowed federal officials to place limits on air pollution.

As a result, this question of federal authority over states has exposed a predictable rift among the states in a way neither of the other two cases have.  “I think it's more of a red-state, blue-state divide,” said Michael Gerrard, a law professor at Columbia Law School and director of the Center for Climate Change Law.

Eighteen states have filed a brief opposing the challenge to the EPA's rules, in part echoing arguments from previous cases that have implored Washington to regulate pollution more aggressively. Meanwhile, more than a dozen states have weighed in against the regulations in this case specifically, and in the related challenges brought by Texas and Virginia.

If the EPA's authority is upheld, some of the standards for permits will be decided at the state level, with Washington's guidance, another step in the process that could expose further divides in years to come.