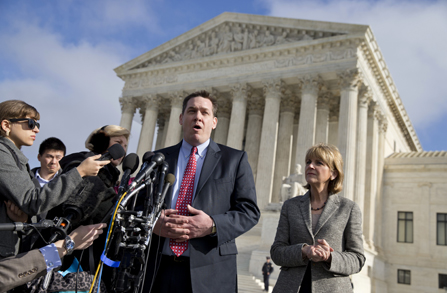 Massachusetts Attorney General Martha Coakley listens as Liam Lowney, whose sister was murdered while working at Planned Parenthood in 1994, speaks outside the Supreme Court after arguments on the state's buffer-zone law. (AP)

Supreme Court justices pointedly questioned a Massachusetts law that limits protests and other speech around the state's abortion clinics, but mostly steered clear of questioning a broader precedent that allows governments to limit similar activities.

Hearing a challenge to a Massachusetts law that limits protest activities within 35 feet of the state's abortion clinics, a number of justices voiced concern that the regulation was too broad and could discriminate against some people based on the content of their speech— potentially making it a violation of the First Amendment.

More than two dozen states and many advocacy groups have weighed in on the case. New York and 12 other states support the law, as do local officials from San Francisco and other major cities. They say states should have the flexibility to respond to local conditions in ensuring safety for abortion providers.

Michigan and 11 other states, meanwhile, oppose the law. Some free speech advocates have also voiced opposition.

Opponents of the measure initially sought to make a broad case against the measure in Wednesday's arguments, but narrower details of the law, such as how the state determined 35 feet was an appropriate zone, dominated much of the hour-long session.

Even Mark Rienzi, the attorney representing those who challenged the law, in the end cited Massachusetts as an outlier, arguing that 49 other states have managed to deal with this issue without adopting such a strict measure.

“It's not impossible to draw a statute to deal with this problem,” he said near the end of arguments. “Forty-nine other states have done that.”

Justice Elena Kagan, one of the court's liberals who at other times in the arguments was open to arguments that buffer zones around hotbeds of protest activity could be justified, also seemed troubled by the scope of the limit in question.

After saying she could understand Massachusetts' interest in enacting such a law, Kagan added: “That's not to say this statute doesn't have its problems in my view.”

Justice Stephen Breyer, another of the court's liberals, repeatedly tried to narrow the case against the Massachusetts limit, which had the effect of making it seem like an outlier among similar measures. He pointed out, for example, that Massachusetts' law was different and more restrictive than a Colorado law upheld by the court in a 2000 decision.

Still, Breyer argued perhaps lawmakers should receive the benefit of the doubt in regulating a volatile situation, repeatedly asking for and pointing to evidence that the state relied on in enacting the limit.

“Does the state have the right in your opinion to say, ‘It's tough to referee that?'” Breyer asked at one point, citing an example where people from all sides of the debate might congregate in front of a clinic.

Justices Sonia Sotomayor and Ruth Bader Ginsburg seemed more sympathetic to the state's case, which it says rests on a history of disturbances dating back more than a decade at the state's abortion clinics.

“It has a history, a considerable history, of disturbances,” Ginsburg said, saying that perhaps such a broad limit was required because the state couldn't know in advance who will turn disruptive or violent.

“Is there any abortion clinic that has not had a problem?” Sotomayor asked at one point. The answer, she was told, was that all but two clinics in the state said they'd experienced disturbances before the law passed.

Conservative Justice Antonin Scalia interrupted Jennifer Miller, an assistant attorney general representing the state, almost immediately as she began her argument. He objected to her calling the law's opponents “protesters,” instead insisting that they be called “counselors.”

“What these people want to do is speak quietly and in a friendly matter,” Scalia said. “This isn't a protest case…It's a counseling case, not a protest case.”

Echoing an argument used by those challenging the law, justices Anthony Kennedy and Samuel Alito joined Scalia in questioning whether the limit was truly content neutral. Alito pointed to an example where an employee of the clinic – exempt from the law's restrictions – would be allowed to talk with a prospective patient on their way in, but someone hoping to say anything else would be barred from doing so.

“How can a statute like that be viewed as content neutral?” Alito asked. “The difference is the point of view,” he continued. “How do you justify that?”

Massachusetts denies that such a situation – where so-called escorts are allowed to operate freely within the zone, but abortion foes are barred – is allowed under the law, an argument Ginsburg made in countering Alito.

Miller, though, countered that an employee speaking to prospective patients within the zone would be “simply incidental to the permissible conduct” allowed under the law, in this case acting as an employee of the clinic. She argued the state had enacted the best law it could draft to address a long-running problem occurring around the clinics.

She later added that no one has a blanket right to speech no matter where they are, even a public sidewalk.

Kennedy, who is known to back broad interpretations of First Amendment rights and strongly dissented in the court's 2000 ruling upholding Colorado's buffer-zone law, seemed particularly troubled by that response.

“There's no guarantee to talk quietly?” he asked.

The court is expected to issue its ruling by the end of its term in June.