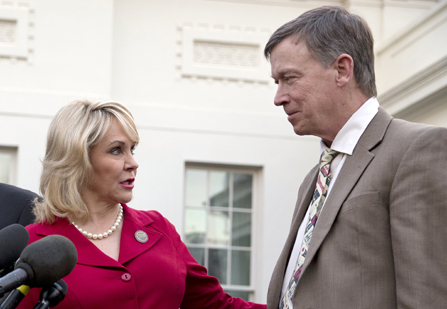 Colorado's John Hickenlooper and Oklahoma's Mary Fallin, speaking Wednesday in the capital as the leaders of the National Governors Association, said that despite the recent budget deal struck on Capitol Hill, many issues vital to states remain unresolved.  Among them: education funding, tax reform, water resources development, and Internet sales taxes.

“Washington's short-term thinking and continued inaction are hurting state economies, repressing job growth and, ultimately, hurting American families in every state,” Fallin said. “States are leading and we encourage our federal partners to work more closely with us…Above all, please do not get in our way.”

Hickenlooper singled out infrastructure as the most important need. “It is critical that we work with our federal partners to rebuild and invest in our roads, rail, bridges, airports, waterways and energy infrastructure.”

Fallin and Hickenlooper delivered the annual “State of the States” address a day after they and other governors met with President Barack Obama at the White House. Obama pledged to work with the governors on “strategic investments in transportation and infrastructure,” and on expanding access to early education.

Asked to comment on Colorado's recent legalization of recreational marijuana, Hickenlooper noted that he opposed legal pot but will “regulate the heck out of it” now that it is permissible in his state.  He said marijuana sales should be regulated as alcohol sales are, with stiff penalties for those who sell to minors.

Hickenlooper also promised to crack down on driving while on marijuana. “If you are driving while high, we will lock you up,” he said.

Fallin, whose state is among the most conservative in the country, said Oklahoma is unlikely to follow Colorado's lead on marijuana policy.

Fallin and Hickenlooper noted the competition between states to attract business and industry to their jurisdictions. Hickenlooper said most of that competition is “aboveboard and friendly and respectful—with certain exceptions, who are not in the room,” he added to laughter.

He may have been referring to Texas Gov. Rick Perry, a Republican, who has made a splash by traveling to states like Maryland and Connecticut to urge businesses in those states to move to Texas.