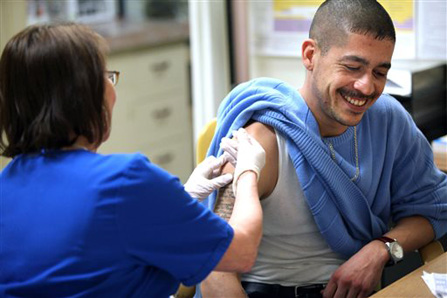 Massachusetts had the best-in-the-nation flu vaccination rate during last year's flu season. Florida had the worst.

The Trust for America's Health, which conducted the state-by-state analysis with data from the Centers for Disease Control and Prevention (CDC), deemed the vaccination rate in the United States disappointing. It said 32 states failed to vaccinate even 40 percent of their residents between ages 18 and 64.

The trust, a public health advocacy organization, reported that 35.7 of adults under 65 were vaccinated last flu season compared to 56.6 percent of children and 66.2 percent of seniors.

The CDC recommends everyone over age 6 months get a flu shot every year.

Florida, which has a huge elderly population, did a much better job with its older citizens. Nearly 57 percent of the elderly were vaccinated in 2012-2013, although that was still significantly below the national average for senior citizens.

Jeffrey Levi, executive director of the Trust, said that the reason the vaccination rates among the elderly was significantly higher than younger people is that it is much easier to focus public education toward older Americans. He also said that until the big outbreak of the H1N1 flu strain in 2009, it was generally thought it was only vital to vaccinate the very young and the elderly for the flu. But H1N1 disproportionately affects young people, which is why the CDC and the Trust now recommend flu vaccinations for all.

Last year, the flu was generally most intense in the South and West although northern states such as New York, Michigan and Minnesota also had severe outbreaks at certain times of the season.

The Trust's report including several suggestions for improving vaccination rates, including better public education and eliminating co-pays for flu shots.