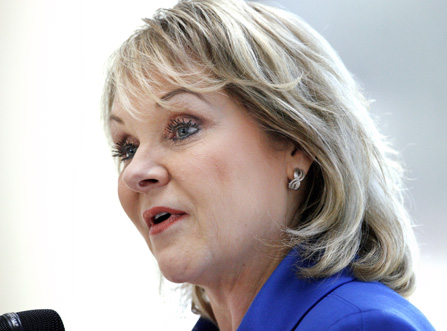 Oklahoma Gov. Mary Fallin, shown here in a photo from last year, told members of the U.S. House Tuesday that states needed stability in federal funding for transportation. Congress is kicking off work on a new transportation bill this month, because the current two-year deal expires in September. (AP)

The federal Highway Trust Fund, which is funded primarily by fuel taxes, is projected to run out of money in 2015 if Congress takes no action.

Fallin, who once served on the House Transportation and Infrastructure committee, also told her former colleagues that national help is needed, even though many states have raised money for transportation on their own.

“States can't pick up the load by themselves. We need to have a national vision for a national transportation infrastructure system,” she said.

Some conservative members of Congress have pushed for states, rather than the federal government, to take on the chief responsibility for funding and planning transportation projects.

But Stu Levinick, a group president of Caterpillar Inc., said one of the reasons why the transportation network of the United States is falling behind that of other countries is because there is not enough national coordination of infrastructure.

As an example, he said, a state that builds a state-of-the-art port facility but does not have the highway network to let shippers bring goods in and out of the port, gains nothing.

Too often, America's infrastructure is inefficient, Levinick said, which is why 40 percent of Caterpillar's exports and imports travel through Canadian ports rather than U.S. ports. A shipment from Montreal, he said, arrives in Illinois two or three days faster than a shipment coming from Norfolk, Va. Shipments from the West Coast also come faster through Canada than from California, he said.

Atlanta Mayor Kasim Reed, a Democrat appearing on behalf of the U.S. Conference of Mayors, also pressed the House panel to draft a long-term bill that would last at least five or six years. He also encouraged the lawmakers to give city officials more say in how transportation money is spent.

Tuesday's hearing marked the beginning of the House's efforts to draft a new transportation funding policy. The committee's chair, U.S. Rep. Bill Shuster, a Pennsylvania Republican, said he hoped to have a bill ready for the entire chamber by August.

But there's little consensus so far on how best to raise the money to keep the Highway Trust Fund in the black. It has repeatedly run out of money in recent years, as demand for new projects outpaced money brought in by federal fuel taxes. The country's gasoline tax of 18.4 cents a gallon has not increased since President Bill Clinton's first term.