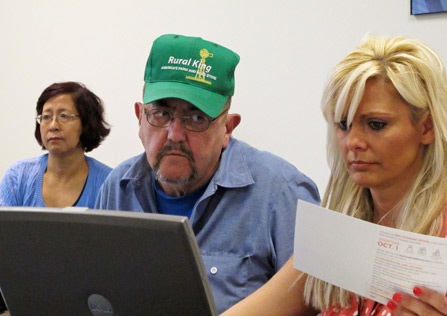 An Illinois man tries to sign up for health care coverage through the Affordable Care Act. Even with the federal financial assistance available under the law, health insurance may remain unaffordable for some Americans. (AP)

The promise of the Affordable Care Act is right there in its title: Affordable. Yet, anti-poverty agencies across the country fear that even with the federal financial assistance available under the law, health insurance will remain unaffordable for significant numbers of low-income Americans.

“For those with very low wages trying to raise kids, after paying for housing, electricity, food, transportation, and child care, asking people to pay another $50 or $100 a month, that's just out of reach,” said Sireesha Manne, a staff attorney at the New Mexico Center on Law and Poverty.

The Affordable Care Act (ACA)  is designed to make insurance affordable for Americans with low and moderate incomes—particularly since it requires all Americans to have health insurance starting this year, or face financial penalties. The law expands Medicaid eligibility (in the states that have agreed to do so) to the poorest Americans—those making up to 133 percent of the federal poverty line. But it also provides financial assistance for those making up to 400 percent of the poverty level to help them buy private insurance on the new state health exchanges.

Still, the financial help isn't enough for some. “Even with the subsidies, some people simply won't be able to manage to pay their health insurance premiums consistently with all the other costs facing them,” said Janet Varon, executive director of the Northwest Health Law Advocates in Seattle which works on health access issues.

The authors of the ACA anticipated this problem. To address it, the law allows states to create a separate insurance program, called the Basic Health Program, for people who earn too much to qualify for Medicaid and too little to afford insurance on the state exchanges, even with federal aid. Under such a plan, the federal government will give the subsidies directly to the states, instead of to individuals and families. The states are supposed to pool the money and then use the financial leverage to push insurers to offer less expensive coverage.

A number of states, including New York and Washington, are eager to create such programs, but they can't until the Obama administration issues the regulations that will govern them. “We all thought we were going to be able to start in 2014 and then we waited for the rules, and we waited and waited and waited,” said Varon, who sits on a state board that will develop Washington's Basic Health Program when the rules are finally written. Some now fear states won't be able to launch the programs before 2016.

For now, low-income Americans who aren't eligible for Medicaid must rely on the financial help that is available to them on the health insurance exchanges.

Determining how much that amounts to is a computational labyrinth.  According to the ACA, a family of three whose annual income is at 133 percent of the federal poverty level (an annual income of $24,352), should have to pay no more than 3 percent of their household income in annual premiums, or $731. In that case, the federal government would pay the insurance company the difference between $731 and the actual premium.

The percentage an individual or family is expected to pay rises at higher income levels, up to 400 percent of poverty. At that income level, paying up to 9.5 percent of household income on health insurance is considered affordable. So, a family of three making $73,240 would receive a subsidy to cover premium amounts above $6,958.

People making between 133 and 250 percent of the poverty level also can get help with their out-of-pocket medical expenses, such as co-payments for visits to the doctor, providing they purchase at least a “Silver” plan on the exchange. The exchanges offer up to four different tiers of health insurance plans: “Bronze,” “Silver,” “Gold” and “Platinum.” Bronze plans have the cheapest premiums, but leave policyholders with the highest co-payments and deductibles. Platinum plans have the highest premiums but the lowest co-pays and deductibles.

Those cost-saving breaks, however, are only available for those selecting Silver plans, apparently to entice people away from Bronze plans with their high deductibles and co-pays.

Despite all of this assistance, health insurance still may not be “affordable” for some.  Affordability, like beauty, is a matter of opinion. “What it means for something to be affordable or not affordable is totally debatable,” said Sherry Glied, dean of New York University's Robert F. Wagner Graduate School of Public Service. “It isn't like there's a fixed definition of affordability.”

That's particularly true in the U.S., where the cost of living varies so strikingly. “What's poor in Mississippi is different from what's poor in New York state,” said Elisabeth Benjamin, an executive with the Community Service Society of New York.  “People have so little disposable income in New York City and other urban areas, but the law doesn't do geographic indexing.”

Using cost of living data on the Albuquerque area from the Economic Policy Institute, Kelsey Heilman, a former staff attorney with the New Mexico Center on Law and Poverty, showed that a single mother of two making 200 percent of the poverty level would have virtually no money left for health care premiums or health care expenses after paying for housing, food, transportation and other necessities. That mother, Heilman said, might decide to go with the cheaper Bronze plan, but then she would forgo the cost-sharing help the federal government makes available for Silver plan policyholders.  As a result, she might pay as much as 40 percent of her medical expenses out of pocket, instead of the 13 percent she would have to pay with a Silver plan. That difference could amount to more than $3,000 a year.

Those who decide to forgo insurance can ask for hardship exemptions from the financial penalty. But getting medical care is likely to become increasingly difficult for them because the federal government is cutting its payments to hospitals that provide charitable care to the poor.

Other possible solutions to the affordability problem have also surfaced. Massachusetts, which enacted its own health care reforms in 2006, won federal permission to use Medicaid dollars to provide premium and cost-sharing assistance for those with incomes below 300 percent of the poverty level who purchased private insurance on the Massachusetts exchange. Other states could apply for permission to do the same, but it is a months-long process.

States also might seek to raise eligibility for Medicaid above the 133 percent threshold. Manne, with the New Mexico Center on Law and Poverty, said some businesses and hospitals have talked about voluntarily undertaking sponsorships to help those unable to pay premiums or meet out-of-pocket obligations.

But, Manne said, broad relief seems months away, if not longer. In the meantime, she predicts that policymakers will be hearing about legions of Americans who still can't afford health care—no matter the title of the Affordable Care Act.