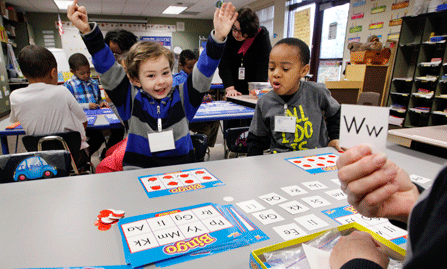 Two kindergarten students play a letter bingo game at Campbell Hill Elementary in Renton, Wash. Twice as many children are eligible for state funding for full-day kindergarten in Washington state this school year as compared to last year. (AP)

In the not too distant past, kindergarten was a place where children learned to color, share and play. But a higher regard for kindergarten is emerging, including a move toward all-day sessions in some states, as a growing body of research underscores the importance of learning in the earliest years.

The percentage of kindergartners attending full-day programs has grown from about 10 percent in the 1970s to about 76 percent in 2012, with a steep increase between 2002 and 2006, according to Child Trends, a nonprofit research center. While some programs took a hit during the recession, several states have taken action recently to expand access to full-day kindergarten.  Part-day kindergarten typically last two or three hours, while full-day kindergarten can range from four to seven hours.

States that require school districts to fund full-day kindergarten at the same rate as first grade:

“Full-day kindergarten is so important,” said MaryLee Allen, director of child welfare and mental health at the Children's Defense Fund. “There's been research that shows that children who have access to full-day kindergarten are more prepared for school and making that transition to first grade.”

Clare McCann, a policy analyst with the New America Foundation, said that the Common Core State Standards, a set of English and math standards for students in kindergarten through 12th grades voluntarily adopted by most of the 50 states, are also driving interest in expanding full-day kindergarten.

“The standards are so rigorous, I think school districts and educators are feeling like it might be difficult to meet those standards if they're not allowed more time with children and more time learning,” McCann said.

The recent emphasis nationwide on early learning in prekindergarten through third grade, including a push to make sure children are reading by the third grade, has also contributed to a demand for full-day kindergarten, experts say.

Arizona eliminated all state funding for full-day kindergarten in 2010, after increasing money for the full-day programs in all school districts between 2005 and 2009, according to a report by the Foundation for Child Development.

To pay for full-day kindergarten, school districts can raise taxes, charge parents tuition or use temporary funds, such as grants. But advocates of full-day kindergarten say none of the options is ideal because they may restrict the number of children who can attend full-day programs.

In Minnesota, Charlene Briner, chief of staff for the state Department of Education, said Democratic Gov. Mark Dayton and Education Commissioner Brenda Cassellius pushed for the expansion of full-day kindergarten out of a concern that every family should have access to it, regardless of zip code or socioeconomic background. Some school districts in Minnesota were charging families tuition of $300 to $1,200 a year for full-day kindergarten.

“Being able to go to an all-day program because your family can afford it wasn't consistent with the view that an equitable opportunity should be had by all children,” Briner said.