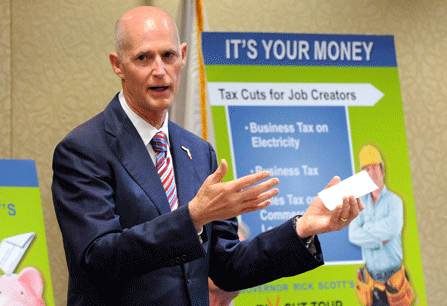 Florida Gov. Rick Scott speaks during his "It's Your Money" tax cut tour last September in Jacksonville, Fla. Most states' revenues and spending have increased but uncertainty lingers in statehouses. (AP)

California and New York are flush heading into 2014, while at the other extreme Alaska and Kansas are hurting. Overall, most states are in good shape—albeit with a bit of a hangover from the recession and some uneasiness about the future.

In most states, revenues and expenditures are up, but only 20 have reached their pre-recession peaks when inflation is taken into account. Those shortfalls, and the uncertainty caused by numerous budget showdowns in Congress, have left states unsteady.

“There's more stability and revenues are less volatile,” said Scott Pattison, executive director of the National Association of State Budget Officers.  “As long as the economy continues to recover, states will continue to have modest growth. I don't expect robust growth. I expect modest growth, until we get the next recession, which hopefully is a ways away.”

According to NASBO's latest report, 43 states anticipate growth in revenues and spending in fiscal 2014 compared to fiscal 2013. In states where revenues are not projected to grow, the causes tend to be state-specific and varying:  a decline in oil prices and production in Alaska, a big tax cut in Kansas, and a decrease in coal production in West Virginia and Wyoming, Pattison said.

Many states have fewer employees than they did before the recession, which has helped them hold expenses in check. But many still have a hold on hiring, reflecting angst about the future. States experiencing shale oil and gas booms, such as Texas and North Dakota, are doing well, but Alaska is suffering as oil companies move operations to those states. California and New York are flourishing thanks to skyrocketing income and real estate tax collections.

“Up Is Better Than Down”

The best news in most states is that revenues for 2013 were up substantially from 2012. That allows them to climb out of their budget holes and consider cutting taxes, increasing spending or refilling rainy day funds depleted over the past five years. Some of that revenue growth, however, came from a one-time anomaly caused by investors shifting income into 2012 to avoid higher federal taxes in 2013.

In most states, the outlook for fiscal 2014 is upbeat, while a few states continue to face fiscal challenges, said Lucy Dadayan, analyst for the Rockefeller Institute. “Overall, states would likely continue seeing growth in revenues for the rest of fiscal 2014 as well as in fiscal 2015,” she said. “However, the revenue growth would likely be modest, all things being equal, and in the absence of intervening factors.”

In Connecticut, for example, revenues and expenditures are expected to grow 3.7 percent in fiscal 2014, compared to fiscal 2013. “We're doing pretty well this year,” said Gregory Messner, assistant executive budget officer. “It's certainly not like a typical recovery period. … This one has been much more protracted. It would have been nice to have recovered as fast as we did from previous ones, but that hasn't happened. That said, up is better than down.”

Messner said Connecticut is projecting a $135 million surplus. He said he would like to add to the state's rainy day fund, which was fully depleted in 2011, and now stands at about $370 million. But he acknowledged that Connecticut, like most states, is facing other demands on the surplus. “Everybody wants,” he said. 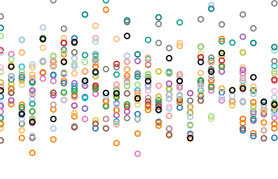 See Stateline Infographic: How Much Does Your Governor Make? The top-paid administrator in your state probably isn't who you think it is.

A recent analysis of states' fiscal situations by the Pew Charitable Trusts (which funds Stateline) also shows that revenue growth has been uneven. For the first time, total state tax revenues appear to have recovered from their plunge in the Great Recession. Receipts for the 50 states combined were 0.5 percent higher in the second quarter of 2013 than at their peak in 2008, after adjusting for inflation. But only 20 individual states were back to their own peak levels.

While revenues, employment and reserve funds are moving in the right direction, looming pressures on states' budgets remain and could pose obstacles to further progress, the analysis shows. Those pressures include unfunded pension and retiree health care costs for public workers. In 43 states, the aggregate of these long-term retirement obligations is larger than the public debt from bond issuances and other state borrowing, according to the Pew data.

The fiscal outlook in several states is a microcosm of what is happening across the country, reflecting the good, the bad and the ugly.

In California and New York, higher income tax collections, increased property tax collections from a rising housing market and restrained spending over the past few years have created budget surpluses.

In California, a recent analysis projected that continued growth and income will create a $5.6 billion reserve at the end of fiscal 2015. While that number will be whittled considerably by a state law requiring education spending to rise as revenues do, the analysis still projected a $234 million surplus.

Now the debate begins over how to allocate the windfall. Democratic legislators are calling for more spending on welfare, kindergarten and child care. The state analysis called for building up the rainy day fund, now at $1.1 billion, to $8 billion.

Another option for states with surpluses is cutting taxes. In New York, Gov. Andrew Cuomo, a Democrat, has proposed a major tax overhaul this fiscal year, based on his state's estimated $2 billion surplus. Cuomo has proposed cutting property taxes and, in a nod to New York City, renters' taxes.

Kentucky, Nebraska and Oregon also are weighing proposals to revamp their tax codes.

In 2012, Tennessee cut its inheritance tax, its gift tax, its sales tax on groceries and some of its taxes on bond dividends and interest—reducing annual revenues from those sources by about $165 million. Republican Gov. Bill Haslam said budgeting for the next fiscal year is going to be difficult, especially as the state faces rising education and health care costs.

Kansas also cut taxes and is now facing a revenue shortfall. According to the Rockefeller Institute, Kansas reported the largest revenue decline for the third quarter of 2013 at 9.4 percent. In 2013, Republican Gov. Sam Brownback signed an income tax cut, and Kansas reduced its sales tax rate from 6.3 percent to 6.15 percent.

Where It Gets Ugly: Alaska

Declining oil and gas production and falling energy prices have slammed Alaska's revenues. According to the Pew report, through the second quarter of 2013 Alaska experienced a greater revenue decline from its pre-recession peak than any other state.

“My administration is focused on living within our means, meeting our constitutional priorities, fixing what we have, and finishing what we've started,” he said. “I will continue to work with legislators to hit a lower fiscal target.”

Parnell's slap at the federal government reflects the frustrations of many state officials, who have struggled to craft budgets in the last several years amid the uncertainty of a series of federal budget showdowns.

According to NASBO's “Fiscal Survey of the States” almost 31 percent of state budgets came from federal funds in fiscal 2013.  By approving a two-year budget deal late last year, Congress made states' jobs easier—at least until the deal expires in 2015. The agreement also eases some of the across-the-board spending cuts known as sequestration.

While the bottom line is better for states, how individual programs will fare is uncertain, according to Trinity Tomsic, an analyst for the Federal Funds Information for States, a budget analysis group.

“It's more money, that's good news,” she said. “But we will not be able to have a sense of how states fare until we see the numbers. The fact that it doesn't look like there will be another shutdown gives states more certainty.”