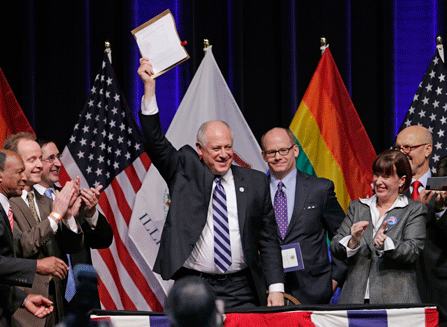 A string of victories for supporters of gay marriage has vastly expanded the areas of the United States where same-sex couples can marry, marking a stark shift from five years ago when it was legal in just two states.

Seven states legalized gay marriage in 2013, and same-sex marriages resumed in California after the U.S. Supreme Court invalidated the state's Proposition 8 ban. The year before, four states legalized it and voters in Minnesota defeated a proposed constitutional ban on the unions.

Today, 17 states plus the District of Columbia allow same-sex couples to marry, including the entire Northeast. More than a third of Americans now live in states that allow gay marriage or recognize same-sex marriages performed elsewhere, according to the advocacy group Freedom to Marry.

Stateline's data visualization shows what has changed since 2008.

According to Pew Research Center data, just 35 percent of Americans favored allowing gay people to marry in 2001, and 57 percent opposed it. This year, support reached 50 percent, and opposition fell to 43 percent. Among younger Americans, support is even stronger: Two-thirds of those born after 1981 say they back gay marriage, according to the Pew survey.

But expanding the map further won't be easy. This past June the U.S. Supreme Court struck down the federal Defense of Marriage Act, but it left the remaining state bans in place. A federal judge's December ruling in Utah striking down its ban casts some doubt on other state bans, but that ruling was stayed by the U.S. Supreme Court this week, leaving the issue in limbo there.

The remaining states represent more contested ground in conservative areas. Though support for gay marriage has increased in every state, opposition remains strong in some states, especially in the South.

The coming year will bring new gay marriage fights. In Indiana, Republican state lawmakers may push a constitutional ban on same-sex marriage, which would appear on state ballots this fall. Meanwhile, gay marriage supporters in Oregon plan to seek legalization via the ballot box. In many other legislatures, lawmakers will debate the tax treatment of same-sex marriages and whether to recognize marriages performed out of state.

In some states, the action will be in the courts rather than in the legislature. Advocates of same-sex marriage are mounting legal challenges to bans that remain in place in Virginia, Tennessee Nevada and Colorado, among others. An appeal of the Utah ruling will draw close attention.

It may be just a matter of time before the U.S. Supreme Court is asked to weigh in on the issue again – this time possibly setting the standard for the country as whole.