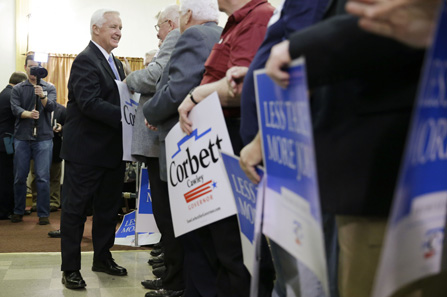 Pennsylvania Gov. Tom Corbett, left, a Republican who is running for re-election, meets with supporters during a November campaign stop in Philadelphia. Corbett is a member of an ambitious and partisan class of governors first elected in 2010 who now face re-election. (AP)

Governors and legislators will wrestle this spring with how to spend newfound surpluses. They will debate whether to entice businesses with lower tax rates or to restore funding for schools, as their states climb out of the recession. But mostly they will focus on getting re-elected.

This marks the fourth  year in the terms of most governors elected in 2010, a group of many first-time state executives who have reshaped the national landscape on taxes, government spending and health care coverage.

This class of ambitious and partisan governors drove huge changes through mostly friendly state legislatures. But their far-reaching agendas polarized voters, and those divisions remain today.

Some of the most visible members of the Class of 2010 are also the most vulnerable. Polling shows Republicans Scott Walker of Wisconsin, John Kasich of Ohio, Rick Scott of Florida, Tom Corbett of Pennsylvania and Paul LePage of Maine are in tight races with or trailing their likely Democratic opponents. Democrats have far fewer seats to defend, but they could lose the governor's offices in Arkansas, Connecticut and Illinois.

All told, 36 states will choose their governors this year, while 46 will elect state legislators. Four incumbent governors are term-limited and prevented from running again. Three others have announced they are not seeking re-election.

The elections could also determine whether single-party control remains the rule in state capitols. In 23 states, Republicans hold both the governor's office and both chambers of the legislature. Democrats control both the executive and legislative branches in 13 states.

In both legislative and gubernatorial races, neither party seems to have the upper hand nationally. That is a marked change from recent election cycles, when either Democrats or Republicans have had huge early advantages, said Tim Storey, an elections expert at the National Conference of State Legislatures.

Historic trends indicate Democrats are likely to lose seats, because the president's party almost always does in mid-term elections, he said. (The exceptions were in 2002 after the 9/11 attacks and during the Great Depression.) But with Republicans in complete control of 27 state legislatures, the GOP is fast running out of targets for expansion.

“I don't know what the wave is going to be, and I don't think the legislators do either,” Storey said. “They're all running scared a little.”

Political handicappers also see no clear advantage for either party. Of the nine most competitive governor's races ranked by the Cook Political Report, for example, four are now held by Democrats and five by Republicans.

Jobs and the economy are at the top of almost every candidate's list of campaign themes, said Jennifer Duffy, senior editor at the Cook Political Report. Health care expansion and school funding are also popular issues.

But national themes often take a back seat to local concerns, Duffy said. The issues include pension reform in Illinois; privatizing liquor stores and the Penn State child sex abuse scandal in Pennsylvania; and the party switching of Charlie Crist in Florida, a former GOP governor now running as a Democrat.

Jobs and the Economy

The good news for incumbent governors is that the economy has improved over the last four years. In October 2009, the nation's unemployment rate peaked at 10 percent. By November 2013, that rate was down to 7 percent.

But the sluggish recovery — and the response of states to it — is still a touchy issue, especially in the 16 states with governor's races where unemployment exceeds the national average.

Michigan is a good example. The recovery there is tentative, making the debates over job creation, tax fairness and spending decisions critical.

Snyder, the Republican governor, touts many changes that have happened under his watch to help make Michigan a “comeback state.” But as of November, the state's jobless rate was the third-highest in the country, at 8.8 percent.

Snyder has tried to stoke the Michigan economy by passing business tax cuts, trimming regulations and remarkably, in the cradle of the country's labor movement, signing “right-to-work” laws. Snyder said the latter changes, which let workers opt out of union membership, would help attract companies and jobs to the state.

But those economic benefits have been slow to materialize, said Bill Ballenger, editor and publisher of the political newsletter Inside Michigan Politics. It is also difficult to prove whether the improvements that have occurred were the result of changes in state policy or of the federal bailout of the auto industry, he said.

“There is nothing tangible that Snyder has done in terms of the tax structure, in terms of ‘right-to-work,' in terms of balancing the budget that points ineluctably  to the state turning around economically,” Ballenger said.

Democrats and their union allies are trying to make their case on a much more personal scale. They criticize Snyder for signing a law that imposes a tax on pension income, which even some Republican lawmakers want reversed. They highlight cuts the governor made to school funding. Snyder's likely opponent, Mark Schauer, wants to hike the minimum wage from $7.40 an hour to $9.25 an hour.

It is an approach many other Democrats across the country are using.

In Illinois, Democratic Gov. Pat Quinn said he wants to boost his state's lowest pay rate from $8.25 an hour to more than $10 this year. Washington Gov. Jay Inslee, another Democrat, said it is time to start talking about his state's minimum wage, already the nation's highest. Several localities are taking up the idea, as well.

The looming elections have already given budget discussions in some states a partisan edge.

Scott, Florida's Republican governor, wants the legislature to cut auto registration fees, which would save a typical motorist $25. But it would also remind voters that the tag fees were increased five years ago by Crist, Scott's predecessor and likely Democratic challenger.

Scott would be able to foot the $400 million bill for the rollback, because Florida expects a $1 billion increase in state revenue next year. That is a huge turnaround from 2009, when the fees were increased. Lawmakers that year had to fill a $2 billion gap.

But now Crist, a former Republican, is taking a page out of the national Democrats' handbook by criticizing Scott for signing off on $1 billion in cuts to schools in his first year. Most of that money has been restored, but Florida's education spending is still below pre-recession levels.

In Ohio, Republican Gov. Kasich has indicated he wants further budget changes that will remind voters of what he has  accomplished as governor. He told business leaders in December he wants to “double down” on those achievements. He wants to renew expiring bonds to build new infrastructure, after boosting funding for roads last year. He also called for lowering the personal income tax even further than the cuts included in a budget he signed in June.

In Colorado, Democratic Gov. John Hickenlooper is trying to reassert his moderate image through his budget proposal for next year. He wants to spend more money on public schools and universities, sock away more money in the state's rainy day fund and help the state rebuild after massive flooding last year. He cast his budget proposal as nonpartisan. “We expect compromise from both sides that is based on common sense, which has no political affiliation,” he said.

The appeal to the middle followed a rocky year in 2013 for the former Denver mayor, once known for his quirky campaign commercials and business background. Two of his legislative allies were recalled and another resigned over gun control measures they passed. Eleven rural counties voted on whether to secede from Colorado, and five voted in favor. Five Republicans are now considering challenging Hickenlooper for his job.

The issue that shut down the federal government last fall—Obamacare—is likely to influence state politics, as well. But the size of the impact will depend on local circumstances.

Republican governors split in their reaction to the U.S. Supreme Court's decision to uphold the Affordable Care Act as a whole but to make Medicaid expansion optional for states.

Opposition to Obamacare could be a major theme in gubernatorial elections in Arkansas, Maine, Michigan and Pennsylvania, where Democratic challengers voted for the measure while they were members of the U.S. House. Florida's Crist has also supported the federal health law.