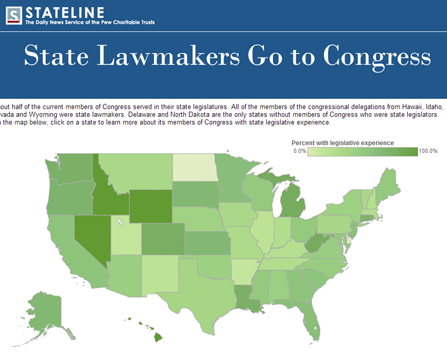 As a Democratic state senator in Maine, Chellie Pingree enjoyed frequent, freewheeling debates with her colleagues from both parties. She helped pass legislation to lower prescription drug costs for the uninsured, and watched proudly as the measure had a ripple effect in other states.

But after eight happy years in Augusta, Pingree reached Maine's term limit for state lawmakers and had to step down.  “I wasn't aspiring for higher office,” she said. “I had to leave a job I loved.”

Now Pingree serves in the U.S. House of Representatives. In many ways, she said, it has proven to be a less pleasant environment.

Though proud of the work she is doing in Congress, Pingree has found the legislative process on Capitol Hill to be far more cumbersome than it was in Maine. At the statehouse, every bill got a hearing, and legislators of both parties had plenty of opportunities to promote their ideas.  As a member of the minority party in the U.S. House of Representatives, Pingree has to exert a tremendous amount of energy just to get a committee chair to grant her a few minutes to state her case.

The public's negative perception of Congress doesn't make the job any sweeter: Congress's approval rating dipped to a record low of 9 percent in November following the government shutdown before rebounding slightly to 12 percent in December, according to Gallup.

“Honestly, in many ways I found my time as a state legislator more enjoyable,” Pingree said.  “We had a much more lively discussion of all kinds of issues.”

According to the National Conference of State Legislatures, about half of the current members of Congress spent some time in their state legislatures, a rate that has stayed remarkably stable for decades. There are 43 former state legislators in the U.S. Senate and 217 in the U.S. House of Representatives.  Congressional members from Hawaii, Idaho, Nevada, West Virginia and Wyoming are most likely to have spent time in their state legislatures, while members from Arkansas, Delaware, Illinois, New Mexico, North Dakota and Utah are least likely to have had that experience.

States with term limits, such as Maine, are the ones most likely to have former state legislators as members of Congress. On average, 57 percent of those states' Congressional delegations served in statehouses, compared with 48 percent from states without term limits.

Pingree is not alone in missing her former life. Karl Kurtz, director of NCSL's Trust for Representative Democracy, said he often hears from members of Congress who miss their days in the statehouse. “There are a lot of former legislators in Congress who think very fondly of their time in the state legislature and the greater ability to get things done and be closer to home,” Kurtz said.

At the same time, many in Congress point to their state legislative experience as excellent training for lawmaking at the federal level.

U.S. Sen. Johnny Isakson of Georgia said being a state legislator helped prepare him for the drawn-out nature of the legislative process.  After 17 years in the Georgia state legislature, the Republican said, “I had a maturity about me that really helped me understand that you can't snap your fingers and make things happen overnight.”

The biggest contrast for Isakson has been his narrower scope of focus in Congress. “In the state legislature, you're kind of a jack of all trades,” he said. “In the U.S. Congress, you pretty much are relegated to the jurisdiction of your committee. Your horizons aren't as broad.”

U.S. Rep. Kristi Noem, a South Dakota Republican, said being a state lawmaker gave her a familiarity with legislative procedures that has helped her navigate Congress more effectively. It also has given her an appreciation of how federal initiatives affect states. “I view every piece of legislation through the eyes of someone who has seen it on the state level,” she said. “The federal government should not be doing things that could be better done at the state level.”

Nevada's entire Congressional delegation served in that state's legislature at the same time. “We built a rapport over the years that I think has contributed to our ability to work more effectively as a delegation,” said U.S. Rep. Steven Horsford, a Democrat who served as the state Senate Majority Leader before he was elected to Congress.  “We know our policy interests and focus areas.”

Noem said she misses the camaraderie she experienced in the South Dakota statehouse. “In Congress you spend the vast majority of your time with your staff and visitors,” she said. “You see other members when you're going to the floor to vote or when you're sitting together in committee. When I was in the state legislature, we really got to know each other and our families very well — Republicans and Democrats.”

The 11 former governors who serve in the U.S. Senate share a bond that has helped them cross party lines to team up on legislation. For example, Democrats Joe Manchin of West Virginia and Tom Carper of Delaware, Republican Lamar Alexander of Tennessee and independent Angus King of Maine, all of whom are former governors, worked together to broker a compromise on student loan legislation that President Barack Obama signed into law in August.

The transition to Congress is most dramatic for legislators who come from states with part-time legislatures, such as Texas. At the state level, these lawmakers often hold down full-time jobs in their districts and receive little pay or staff support for their legislative duties.   States such as California and New York have full-time legislatures that function more like Congress.

“An effective legislator in either party in a more citizen-style legislature can really accomplish a lot,” said Kurtz of NCSL. By contrast, “the House of Representatives is a pretty frustrating place, especially for members in the minority party.”