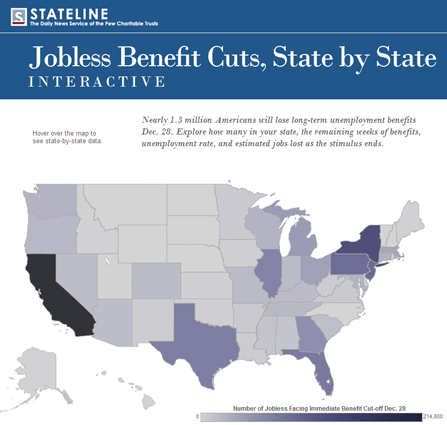 The end of long-term unemployment benefits this month means millions of Americans could be left without their sole source of income while they look for work. In 2013 alone, the federal aid program sent more than $25.6 billion flowing into unemployed workers' pockets and shored up states' struggling economies.

Dec. 28 marks the end of the emergency unemployment compensation program, shutting off benefits for 1.3 million Americans immediately—and millions more over the next year.

Started during the George W. Bush administration in 2008, the program was a response to a spike in long-term unemployment during the Great Recession. Since it began, it has paid jobless benefits funded entirely by Washington to 24 million Americans at a cost of $252 billion through the first half of 2013.

It is now expiring even as long-term joblessness, defined as longer than six months, remains high and the average length of unemployment is longer than 37 weeks. About 3.6 million Americans would have become eligible for the program in 2014, in addition to those facing an immediate end to the assistance this month.

While the severity of the cuts will vary greatly by state, the pain will be nearly universal. Differences in state size and, most importantly, their economies will in part determine the impact of the cuts.

During the recession, unemployed workers could collect benefits for up to 99 weeks, depending on a state's unemployment rate. When the program expires, unemployment insurance will mostly default to the standard 26 weeks nationwide. In November, 4.1 million Americans – more than a third of the 10.9 million total unemployed Americans – had been without work for longer than that timeframe.

California will see nearly 215,000 people lose benefits on Dec. 28, and more than 800,000 will be affected through next year as regular benefits run out, the largest number of Americans affected in any state. New York will see 383,000 affected by the expiration through 2014.

Rhode Island, for example, with its 9 percent unemployment rate as of November, still offers 73 weeks of unemployment benefits – compared to a current national median of just 28 weeks. After Dec. 28, it will offer only the standard 26 weeks.

That means Rhode Island, with its population of 1 million, will have nearly 22,000 residents either lose their benefits this month or be unable to transition to the extended program next year. The federal government paid nearly $142 million in extended jobless benefits to Rhode Island in 2013.

Michigan, with an unemployment rate of 8.8 percent, will also feel the pain. Instead of the 56 weeks of benefits currently offered, only 20 weeks will be available starting later this month. As many as 189,700 unemployed will be affected by the expiration of benefits that brought nearly $1 billion to the state in 2013.

The cuts could also hamper the U.S. economy as a whole. The Congressional Budget Office said letting the benefits expire could cost as many as 300,000 jobs nationwide. Government and private economists estimate growth will be 0.4 percent lower next year than it would otherwise be because of the expiring benefits.

“None of this is good news for an economic recovery that is still struggling to gain traction,” said Chad Stone, chief economist at the left-leaning Center on Budget and Policy Priorities.

The pain for the jobless will be especially severe in the Republican-controlled states that have slashed standard unemployment aid in recent years, reducing the length of assistance to levels not seen since the Social Security Act established the program in 1935.

Florida, for example, now offers just 19 weeks of benefits to the unemployed, while Georgia offers 18. South Carolina, Missouri, Arkansas and Michigan have also reduced the number of weeks available.

North Carolina is a special case because the state not only cut its standard jobless benefits program to 19 weeks, but also earlier this year opted out of the extended benefits program entirely – the first state to do so.

By some estimates, North Carolina's decision ended benefits for as many as 80,000. The state has an unemployment rate of 7.4 percent.

Despite alarms from advocates for the unemployed, efforts to continue the long-term unemployment assistance fell short in Washington. Congressional Democrats and the White House voiced support for the program, but opted not to hold up the recent budget agreement by insisting that the benefits be included in the deal.

Many Republicans have said Democrats must come up with other budget cuts to pay for any extension – which the CBO said would cost about $19 billion in fiscal year 2014 and $6.5 billion in fiscal year 2015. Others have questioned whether they should be extended at all, arguing that they're a drag on the economy that keeps the unemployed from taking jobs that are available.

“Keeping the benefits extended, certainly keeping them extended for a year and a half, can end up being counterproductive,” said James Sherk, a labor policy analyst with the conservative Heritage Foundation. “The problem is, basically, the job search is too narrow.”

The Dec. 28 expiration isn't likely to end the debate. Advocates plan to renew their push for the program when Congress reconvenes in 2014, and take their case to the states as well.

“If you're unemployed it means everything,” said Maurice Emsellem of the National Employment Law Project, an advocacy group. “It's huge, it's huge.”