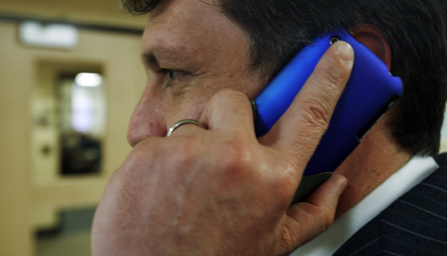 When a mysterious, unauthorized fee appears on your cellphone bill, it's called “cramming.” States are working with major phone carriers to prevent such scams, especially as more Americans ditch landlines for wireless phones. (AP)

States are stepping up efforts to help consumers who find mysterious, and usually bogus, charges on their phone bills.

Some 12,500 Vermont households and businesses are receiving refund checks this month totaling more than $900,000 for illegitimate charges that appeared on their landline phone bills.

These victims of “cramming” got their money back as part of a $1.6 million settlement between the state and 25 sellers of voicemail, email and other services. But in many cramming cases, people don't get refunds—and might not even know they were swindled at all.

As many as 20 million people are crammed each year, but only about 1 in 20 realizes it, the Federal Communications Commission estimates. Cellphone and landline cramming could cost consumers up to $2 billion a year.

Vermont and Illinois are the only states that ban third-party charges on landline phone bills. But state attorneys general from 43 other states are joining an effort to tackle the growing problem of cramming on cellphones. More than one-third of American homes (35.8 percent) had only wireless phones in 2012, up from less than 5 percent in 2003, government data show.

States urge consumers to closely examine their phone bills and refuse to pay for services they did not request. [See: "Cramming" phone bill.] Here are some other tips to avoid being crammed:
Source: More information on avoiding mystery charges is available from the Federal Trade Commission. Cramming victims also may file a complaint with the Federal Communications Commission.

Cellphone cramming often begins when a consumer receives a text message with an offer to enter a contest. By replying, the consumer unknowingly signs up for a monthly, weekly or daily service that provides the latest weather, traffic, news, sports or celebrity gossip. The charge for this “service” ends up on the consumer's cellphone bill, often labeled as a “premium text message.”

Some cramming charges can be as small as $2 or $3 per month and easy to overlook, but others can total as much as $24.95. Even consumers who do not text have been crammed. Often, these consumers are elderly.

The elimination of cellphone cramming should be “a consumer protection priority,” attorneys general from 40 states said in a letter they sent earlier this summer to the Federal Trade Commission.  The effort was led by Vermont Attorney General William H. Sorrell, a Democrat, and Indiana Attorney General Greg Zoeller, a Republican.

Texas Attorney General Greg Abbott, a Republican, last month filed a lawsuit  against four “content providers” who were behind a cramming scam. But Abbott also sued a company, Mobile Messenger U.S. Inc., that handled billing for cellphone carriers. Abbott's expanded focus has attracted the attention of wireless carriers, the cellphone industry and other states.

“Rather than acting as a gatekeeper to keep the bad content providers out as expected by the carriers, Mobile Messenger continues to facilitate the deceptive conduct by allowing the defendant content providers to continue to deceptively bill consumers,” Texas said in its lawsuit.

Wireless carriers do not usually interact directly with content providers, but they do enter into contracts with companies such as Mobile Messenger.

Two weeks after Texas filed its lawsuit, three major wireless carriers — AT&T Mobility, Sprint and T-Mobile — said they would no longer charge their customers for commercial “premium text messages,” which account for the overwhelming majority of cramming complaints.

The announcement also came amid ongoing talks between the wireless carriers and attorneys general from 45 states, led by Vermont, with Delaware, Florida, Maryland, Oregon, Texas and Washington.

The AGs consider the development a major breakthrough in the fight against mobile cramming. “This is a victory for cellphone users” across the nation, Sorrell said. “We are pleased that AT&T, Sprint and T-Mobile have decided to stop the flow of money from the pockets of ordinary people to the bank accounts of scam artists.”

Verizon Wireless said that while it didn't agree with all of the allegations levied by the attorneys general, it is sympathetic to anti-cramming efforts. The company said it was already in the process of winding down its premium messaging business, in part, because of “recent allegations that third parties have engaged in improper conduct in providing premium messaging services to our customers.”

T-Mobile said that despite protections and processes put in place, not all vendors have acted responsibly. As a result, the company is ending all billing for premium text message except for charitable and political giving. T-Mobile made clear in its fact sheet that consumers could still text to vote for “American Idol” and participate in text message campaigns, such as Text to Give for the Red Cross or another cause.

The attorney generals said they would work with other carriers to encourage them to take the same steps that AT&T, Sprint, and T-Mobile have agreed to take.

“Carriers have allowed third parties to use mobile billing to charge for their services– services most consumers did not want and may not have even noticed,” Missouri Attorney General Chris Koster, a Republican, said.  “It is time for this practice to stop.”