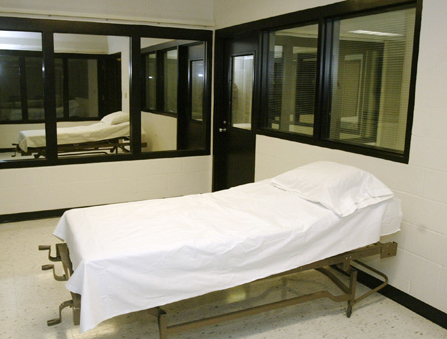 There were 80 new death sentences handed down this year, which was a slight increase over last year but still well below the peak years in the mid-1990s when more than 300 sentences were imposed each year, according to the report.

Outside that trend were two notable efforts in North Carolina and Florida to speed up the execution clock, which is years-long in all states. Republican lawmakers in North Carolina repealed the state's Racial Justice Act, which had created an additional appeal for inmates who felt their death sentence was a result of racial bias in the jury selection process.

Florida lawmakers shortened the timeline for death row inmates so that their execution date cannot be more than six months after they've exhausted all their appeals. The average wait before the law changed was 22 years.

“An inmate who has been on death row for 22 years has had a fair opportunity to discover all of the evidence needed to challenge his conviction,” Gov. Rick Scott wrote in his signing message of the Timely Justice Act. That amount of time “is surely a crushing burden of uncertainty to the victims' families,” the GOP governor added.

Nationwide, the mechanics of the death penalty became more difficult this year. States faced execution drug shortages that caused execution delays and uncertainty. Missouri, Texas, Georgia and Ohio turned to compounding pharmacies to recreate single doses of execution drugs because European drug manufacturers objected to their drugs' use in executions. Those states' existing supply of the drug expired last year.

The year marked a continuation of a trend towards reducing the death penalty that Richard Dieter, executive director of the Death Penalty Information Center, expects to continue into next year.

“It's an eye-opener because standing against the death penalty is a traditionally risky position for governors and legislators,” said Dieter. “That didn't happen in the 1980s or 1990s, but now we've seen six states in six years (repeal the death penalty) and we expect more next year.”