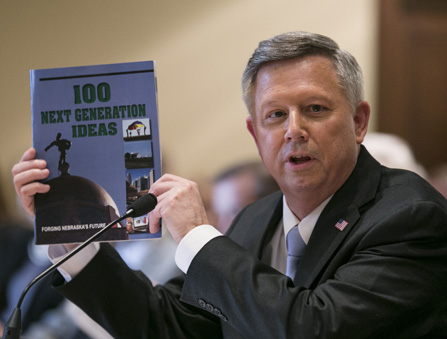 Nebraska Gov. Dave Heineman, in his last year in office, says he will try to persuade the legislature to reduce state income and property taxes. Several states may tackle tax cuts or tax reform in 2014. (AP)

At least four governors will push to revamp their states' tax systems in 2014, keeping the momentum going from this year when five states adopted major changes.

Voters also will have the opportunity to weigh in on taxes in 2014. In August, Alaska voters will consider a ballot measure repealing legislation approved earlier this year giving tax cuts to the oil and gas industry.  In November, Nevada voters will be asked to change the constitution to allow lawmakers to remove a cap on mining industry taxes, which some Nevada officials consider to be a first step towards a comprehensive tax overhaul.

Alaska, Minnesota, North Carolina, Ohio and Virginia were among the states enacting major tax changes in 2013, according to the National Conference of State Legislatures, and several others approved smaller reforms to one tax or another.

In recent weeks, governors in Kentucky, Nebraska, New York and Oregon have said they intend to make significant changes to their state tax codes to make them fairer and to provide a more reliable source of long-term revenue to pay for services and programs. The number could grow as other governors prepare their budget proposals for the coming fiscal year.

As New York Gov. Andrew Cuomo's Tax Reform and Fairness Commission put it, “Good tax policy, including a more equitable tax code, would limit exemptions and tax expenditures for the few and lower taxes for all taxpayers.”

Cuomo, a Democrat who is up for re-election, wants to cut New Yorkers' property taxes, among the highest in the nation, as well as make the tax code less complicated. A separate tax relief commission recommended using half of New York's projected $2 billion budget surplus to finance a two-year freeze on property taxes tied to local governments controlling costs.

Both commissions urged New York lawmakers to lower and simplify business taxes; the tax relief panel proposed the smallest corporate income tax rate since 1968. The commissions also said lawmakers should update the state estate tax by exempting more middle-income New Yorkers. The exemption would be raised from $1 million to $5.25 million, and rates would be lowered, if approved.

Like Cuomo, Oregon Gov. John Kitzhaber is seeking another term next year and has said he plans to persuade voters and lawmakers to change the tax code. Oregon does not have a sales tax and relies on income taxes to pay for education, public safety, human services and other programs. Kitzhaber, a Democrat who is running for a fourth term, does not have a Republican challenger so far.

Nebraska Gov. Dave Heineman, a Republican, has said he will spend his last year as governor asking lawmakers to approve a tax package that would reduce state income and property taxes. Earlier this year, he withdrew a similar proposal after lawmakers said they wanted more time to evaluate the plan.

Kentucky Gov. Steve Beshear, a Democrat who is barred from a third term, said he hopes to convince the legislature to approve an overhaul of the tax system in the 2014 session. Kentucky faces a $370 million budget shortfall.

Predicting the fate of the governors' recommendations is difficult. Reform efforts usually wind up raising some taxes while lowering others, and lawmakers often are reluctant to make such changes in an election year.

Several New York lawmakers have embraced Cuomo's tax panel report, though the Senate GOP leader has said he prefers deeper tax cuts and labor unions and business groups have questioned aspects of the recommendations. Oregon residents consistently have rejected state attempts to impose a sales tax. In Nebraska, a legislative committee studying tax reform recently concluded that major changes are not necessary. A similar panel Beshear convened in Kentucky a year ago offered lawmakers a menu of 54 tax increases, on which they deferred action in this year's session.

Lawmakers are also proposing their own  tax overhauls.  Arizona lawmakers are planning to take up a proposal made by a tax reform panel to reduce the number of income tax brackets from five to three.  Indiana's Republican-led legislature might consider changes to the state's personal property tax in the upcoming session. Missouri's GOP-led legislature, backed by the state's Chamber of Commerce, might try another push to cut income and business taxes though lawmakers were unsuccessful overriding Democratic Gov. Jay Nixon's veto of tax cuts this year.

Other states are proceeding more slowly. Newly elected Virginia Gov. Terry McAuliffe, a Democrat, offered a plan during the campaign to restructure local taxes which he said would improve the state's business competitiveness. McAuliffe, who takes office in January, said as a first step he would name a task force of government, civic and business leaders to come up with proposals.

North Dakota Gov. Jack Dalrymple, a Republican, has asked a task force to recommend proposals for reforming the state's property tax system but the legislature does not meet again until 2015. Wisconsin GOP Gov. Scott Walker said he will convene a series of meetings around the state for residents to offer tax code changes.