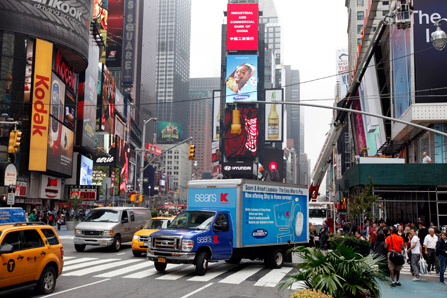 A delivery truck makes its way through New York's Times Square in October 2012. The city is exploring ways to make the jobs of delivery drivers there easier. (AP)

Researchers say they have found a way to get trucks off clogged New York City streets during the busiest parts of the day, and they are hoping to use the same approach soon in other U.S. cities.

A two-year experiment that paid customers, such as shops and restaurants, to receive their supplies at night worked better at changing truck delivery times than previous attempts to discourage daytime deliveries by raising tolls during peak hours, said lead researcher, Jose Holguin-Veras, a professor at Rensselaer Polytechnic Institute.

For city residents, a widespread shift in delivery times could make a huge impact on traffic. There are 7,000 restaurants in the city, Holguin-Veras said, each receiving several shipments a day. Moving those to nighttime would be equivalent to moving all of the traffic generated by the city's ports. Better-flowing traffic reduces air pollution, too.

The professor hopes that the program's success in New York — regarded as the most difficult destination for trucks in the U.S. — shows it can work elsewhere, too. The federal government is promoting research in other U.S. cities, and the work has attracted international attention, too.

In the New York program, the incentives for businesses went beyond money, Holguin-Veras said. Night deliveries are more dependable than daytime deliveries, for instance. That allows receivers to order less, because they do not have to stock up in case the next delivery truck comes late.

“The off-hours delivery program (is) a win-win, as business owners and citizens will both realize immediate benefits,” said Nick Kenner, a managing partner of Just Salad, a restaurant chain with 12 outlets in New York City.

Truck drivers are less likely to get stuck in traffic, pay less money in tickets and tolls and complete their routes faster. Night stops are typically only 30 minutes long, compared to two hours in the daytime.

Off-hour delivery efforts, like the one in the experiment, are “a critical tool in cutting congestion and creating safer, more livable streets, while also aiding businesses in New York City,” said Nicholas Mosquera, a spokesman for the city transportation department.

New York City is including off-hours delivery in its sustainability plan designed to improve the environment, residents' standard of living and the business climate. Orlando and Washington, D.C. won federal grants to begin similar programs, and officials from Atlanta, Boston, Chicago and Seattle also are interested.

The idea for the experiment came after researchers documented that raising tolls on the bridges and tunnels into the city during peak hours had little effect on truckers' behavior.

Studies showed that trucks still largely delivered at the same time and not many of them were able to pass on the cost of the increased tolls to their customers, said Holguin-Veras. Trucking companies are in a very weak position compared to their receivers, because carriers face competition from upstart companies all the time, he said.

“The project is based on the assumption that the receiver of the supplies is forcing the carrier to deliver in peak times. The carriers have no choice,” he said.

The experiment, funded by the U.S. Department of Transportation, involved both federal researchers and the city transportation department and gave businesses a one-time $2,000 payment to allow night deliveries. About 220 businesses took part. The city is now looking for money to entice more businesses.

In a city that is notoriously difficult for truck drivers to work in, trucking industry officials welcome the emphasis on off-hours deliveries and the involvement of the city transportation department. Truckers and city officials say communications between them has improved lately, but the relationship is still testy.

It is more difficult, in fact, for truck drivers to get around New York City than any other U.S. city, said Darrin Roth, the director of highway operations with the American Trucking Associations. Even Boston, San Francisco, Philadelphia and Washington do not compare, he said.

Many trucking companies will hand off goods to local carriers rather than go into New York City, said Roth. Job ads for truck drivers often try to entice new recruits with the phrase, “No NYC.”

City transportation officials say they are working to improve truck deliveries. They have set up a “delivery windows” program to reserve curb space for trucks when demand is highest, said Mosquera, the city transportation department spokesman.

The agency worked with other regional authorities to standardize weight restrictions, is studying conflicts between cyclists and delivery drivers and continues talks with trucking industry leaders, he said.

The rules that make New York City a tough environment for truckers start at the city limits.

The standard 18-wheeler that hauls goods across the country has a trailer that is 53 feet long. New York City does not allow trailers longer than 48 feet. In effect, that means national freight haulers have to buy special trailers for New York City or avoid it altogether.

Longer trucks coming through the city on I-95, the major artery that runs along the Atlantic coast, must follow a single route from the George Washington Bridge to Long Island to get through the city or detour around it.

Trucks coming from New Jersey must pay hefty tolls on bridges and tunnels to cross the Hudson River into the city. At the beginning of December, the Port Authority of New York and New Jersey, which operates the crossings, raised tolls for semis by $10, to a maximum of $85.

Tolls are scheduled to increase each of the next two years, as well.

Routes for trucks within the city are severely restricted. The New York State Motor Truck Association estimates that more than 82 percent of city roads are off-limits.

Parking is another sore spot. All trucks parked in the city, including out-of-state vehicles with commercial license plates, must be modified to meet city specifications. The city requires all rear seats to be permanently removed and the registrant's name and address to be listed on both sides of the truck.

And in a city with scant parking spaces and few loading docks, truck drivers often resort to double parking or parking in illegal spaces to drop off their goods. That inevitably leads to fines, which, for a typical truck cost $750 a month.
Protecting Student Privacy in the Data Age A Year After Newtown Shootings, Many States Have Made Changes
RELATED
Topics
Transportation Economy
Places
United States