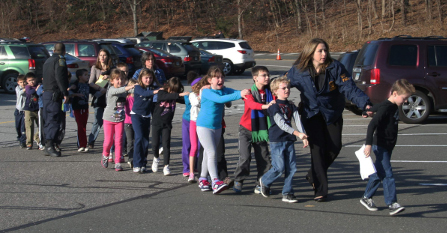 In the year since the mass shooting at Sandy Hook Elementary School in Newtown, Conn., states have both tightened and loosened gun laws and boosted support from mental health. (AP)

One year ago, a 20-year-old gunman shot his way through the front office and into two first-grade classrooms at Sandy Hook Elementary School in Newtown, Conn., killing six adults and 20 children. Then he killed himself.

In the stunned aftermath of the Dec. 14 shooting, President Barack Obama signed 23 executive orders designed to limit gun violence. In Congress,  multiple gun control measures fizzled out in the Senate without even making it to the House.

Where federal lawmakers failed to act, states debated more than 1,500 gun bills and passed 109 of them.  In all of the states which made major changes to their gun laws, one party controls both the statehouse and the governor's mansion.

States also turned their attention to mental health: Thirty-seven states increased their mental health spending, restoring most of the $4.35 billion cut from state mental health funds in the last four years, according to a report from the National Alliance on Mental Illness.

“We know that when we've looked back at these mass shootings, we hear people say that they knew there was something wrong, but they don't know how to engage with that person or what services are available in the community,” said Rebecca Farley, director of policy and advocacy at the National Council for Behavioral Health.

The federal government has followed suit. Before meeting with the families of the victims of the Sandy Hook shootings on Tuesday, Vice President Joe Biden announced that the federal government will boost spending on mental health facilities and providers by $100 million this year. Half of that amount will go to community mental health centers to help people living with mental illness or addiction. The other half will go to developing mental health services in rural areas.

Would any of these actions have prevented the Newtown tragedy? It's unlikely any gun laws passed this year would have prevented Adam Lanza from carrying out the killings at Sandy Hook Elementary School. He used guns and ammunition purchased legally by his mother. He had been evaluated by mental health professionals who told her he was not a risk to himself or to others.  However, the Bushmaster Model XM15-E2S rifle he used is no longer available for purchase in Connecticut under the state's new assault weapons ban.

To mark the one-year anniversary of the shootings, Connecticut Gov. Dannel P. Malloy has asked that houses of worship ring bells 26 times at 9:30 a.m. on Saturday morning. Gun control groups organized by Obama's campaign group, Organizing for Action, will mark the day with rallies encouraging lawmakers to toughen gun laws.

Though no federal gun laws changed this year, the possibility of change was enough to prompt Kansas and Alaska lawmakers to enact laws nullifying federal gun regulations for guns manufactured and kept within state borders.

Missouri Republican lawmakers passed a nearly identical bill, but failed to override Democratic Gov. Jay Nixon's veto by one vote. Montana went to federal court to defend a similar law it passed in 2009. The law was overturned by the 9th U.S. Circuit Court of Appeals.

U.S. Attorney General Eric Holder threatened to sue Kansas if it tried to enforce its nullification law. Republican Gov. Sam Brownback refused to repeal the law, but there has been no further confrontation. Similar bills were debated in at least 33 other states this year, according to the Sunlight Foundation. In Virginia, for example, Republican Del. Bob Marshall has pre-filed a nullification bill in advance of the 2014 legislative session.

On the other end of the spectrum, Colorado, Connecticut, Maryland, New York and Delaware acted to plug the perceived gap created by federal inaction on gun control. All five states now require background checks for all gun purchases in person or online, including at gun shows. Connecticut, Maryland and Colorado also banned certain types of high-capacity magazine or “assault” rifles.  These plans were all considered in Congress, but failed.

The controversy surrounding these new gun laws didn't end with legislative sessions. Maryland and Connecticut had to beat back court challenges from firearms manufacturers, and in Colorado two lawmakers lost their jobs for supporting new gun restrictions.

National gun control groups spent over $4 million to defend the senators, including a $350,000 donation from New York City Mayor Michael Bloomberg, according to records from Sunlight Foundation. Pro-gun groups poured $606,000 into the race. Two-thirds of that money can be traced back to the National Rifle Association, the Sunlight Foundation said.

To keep the Colorado Senate in Democratic hands, state Sen. Evie Hudak, a Democrat from the Denver suburb of Westminster who voted for the gun control laws, resigned her seat in late November rather than fight a recall effort funded by gun rights advocates. Under Colorado law, whoever is appointed to fill Hudak's seat must be a Democrat.

“This historic event should put every gun-grabber in the Capitol on notice for the 2014 elections,” said Dudley Brown, executive director of Rocky Mountain Gun Owners in a statement following Hudak's resignation.

Still, despite the recalls, the Colorado laws are likely to stay in place, said Robyn Thomas, executive director of the Law Center to Prevent Gun Violence. “(The gun lobby) was able to create an unfortunate anomaly with the recall elections, but the truth is that they lost in Colorado,” Thomas said. Colorado voters will have a chance to weigh in next November when Gov. John Hickenlooper, a Democrat, and many state lawmakers are up for re-election.