A crazy quilt of laws governing state income taxes for “road warriors”—residents of one state who work in another—can make tax collections a nightmare. Yet states don't necessarily favor streamlining the system under a proposed federal law.

The way it works now, states have varied standards for requiring workers to file personal income tax returns when those employees work for periods of time in a state where they don't live. The rules also dictate how employers withhold income tax for those employees.

Some states, like New York, carefully monitor out-of-state workers; other states are less vigilant about it, according to the Council on State Taxation, a trade association for multistate corporations.

Some states have a “first day” rule, which means if you set foot in a state you don't live in and work there for one day, you owe that state income tax. Other states have varying periods of time when the nonresident income tax kicks in, ranging from 10 days to 60 days. To complicate things further, some states do not assess the income tax on a time-worked basis; rather, they assess it on an income-earned basis starting at a floor of anywhere from $300 to $1,800 a year, according to COST.

Corporations would like to see a streamlined standard for withholding and collecting income taxes on nonresidents and are backing federal legislation that would make all state tax rules conform. COST officials say it's a nightmare for businesses to keep up with the different regulations.

“The problem is people who travel to other states for work. I travel to 20 or 30 states a year,” said Doug Lindholm, president and executive director of COST. “Half of the states, the requirement is that as soon as I work in that state I owe them a personal income tax return and the company has a withholding responsibility. It's a ‘gotcha' waiting to happen. Very few people comply with it, and very few companies comply because they don't know where their employees are all the time.”

Mary B. Hevener, an attorney with the Washington, D.C., firm of Morgan Lewis who specializes in interstate tax issues, said many companies are developing software that can handle the myriad  state laws regarding “road warrior” workers. But the complexity of all the rules makes it difficult to keep track, she said.

Hevener said some states are more aggressive, noting New York and California as examples. She characterized Minnesota and Pennsylvania as states that “look” into workers from other states. Others are less interested.

States have attempted to ease the situation in a couple of ways. Reciprocal agreements among bordering states can eliminate the problem. Maryland and Virginia, for example, have reciprocity, which means a Virginia resident who works in Maryland does not have to pay Maryland income tax. The District of Columbia, due to its unique nature as the seat of federal government and attractiveness to out-of-state workers, has reciprocity with all states.

But the legislation only applies to workers from states with no income tax or from states which have agreed to the model legislation. So far, only North Dakota has implemented it. Since no other state has signed on, this option does not appear to have wide appeal.

The model legislation does not include professional sports figures, whose contracts generally spell out taxation issues since they play games in many states in the course of a season, experts said.

Under the "Mobile Workforce State Income Tax Simplification Act,” pending in Congress, the amount of time a worker has to work in a state to be liable for income taxes in that state would be standardized at 30 days. Once that threshold is passed, the state's income tax laws governing amounts owed and withholding requirements would apply. The congressional bill provides that an employee's earnings are subject to tax in the states where the work is being performed and could be credited against the worker's income tax liability in his or her home state, which is the way it works now.

Under the Mobile Workforce legislation, New York State would lose big – in excess of $100 million annually. Some 15 percent of the state's income tax revenue comes from out-of-state residents.

“We have many nonresidents who work in New York and pay tax dutifully in the course of their employment in New York,” said Cary Ziter, a spokesman for the state Department of Taxation and Finance.

Because New York has a 14-day rule when the income tax withholding triggers, the federal legislation with its 30-day trigger would hurt New York greatly, Ziter said.

"The revenue loss would be greater than the revenue impact on all other states combined,” he said. The new exemption would increase the state's total loss to the equivalent of six work weeks, he said.

COST estimates estimates that New York would lose only $45 million, after taking into account its presumption that executives who would avoid New York under the new law, Lindholm said.

California could lose about $15 million a year, according to H.D. Palmer, spokesman for the California Department of Finance.

The Federation of Tax Administrators also is opposed and has passed a formal resolution against it. The group said states are best suited to determine their own tax laws. They also said the legislation would disproportionately hurt some states, such as New York.

“We think that it can be crafted to still provide protection but not cause a revenue disruption, particularly to New York State,” said Gale Garriott, FTA executive director. “Of course, there's always a reluctance on the part of our members to accept federal pre-emption law.

“That said, there is an understanding that there is a patchwork quilt here. If the states that are mostly affected would be in agreement with something, the members would not be terribly offended by what those states would agree to.”

The federal bill passed the House last year, but the Senate didn't act on it.  In November, Sens. Sherrod Brown, an Ohio Democrat and John Thune, a South Dakota Republican, reintroduced similar legislation, saying  it is time to end a system which means employers and employees “face up to 41 different state income tax reporting requirements that vary based on length of stay, income earned, or both.” 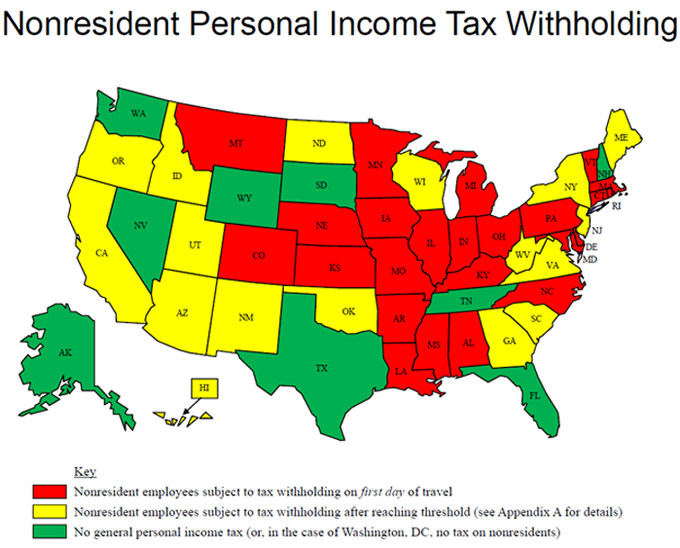