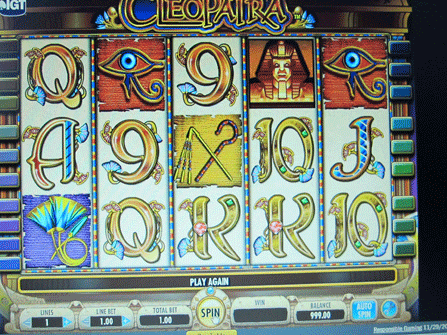 A computer screen displays the results of a losing game of slots in Atlantic City. New Jersey is one of only three states that allow online gambling, but some Indian tribes are talking to state officials about complementing their brick-and-mortar casinos with Internet betting. (AP)

American Indian tribes have 460 gaming facilities in 28 states, but none offers online gambling—at least not yet.

Nevada, New Jersey and Delaware are the only states that have legal Internet gambling, but it is spreading internationally. Worldwide, online betting generates almost $30 billion of revenue a year, with Americans spending $4 billion, according to estimates from the American Gaming Association. Some of the 240 Indian tribes in the U.S. are eager for a piece of that market.

It's unclear how much revenue online gambling will bring to U.S. tribes or states. In New Jersey, for example, Republican Gov. Chris Christie is hoping his state can collect $1.2 billion a year from legal online betting. Fitch Ratings, however, estimates its take will be $300 million to $750 million annually over the next several years.

By the end of the year, an American Indian tribe in rural California, the Alturas Indian Rancheria Tribe, expects to launch the country's first tribal online gambling effort.  The Cheyenne & Arapaho Tribes in Oklahoma are pressing forward with a site that will target gamblers from outside the United States. And the Lac du Flambeau Band of Lake Superior Chippewa Indians in the Midwest is actively preparing for the possibility that more states or the federal government will sanction online gambling sometime soon.

States With the Highest Revenues From Indian Gaming (2011):

Tribes have been deeply divided over whether to allow gambling on their reservations, and online betting is just as divisive. Those that back casinos to combat high unemployment and poverty among Native Americans see online gambling as the next logical step. To prepare, many have set up websites that offer free games with no prizes. But other tribes fear online gaming will siphon business from their casinos.

States began legalizing online betting after the U.S. Justice Department reversed its ban on Internet gambling in December 2011. California, Illinois, Iowa, Massachusetts and Texas were among the states that considered proposals related to online gambling this year, but none was approved.

Because the federal government recognizes tribes as sovereign nations, their gaming businesses are generally exempt from federal and state income taxes and local property taxes. Some tribes share casino revenues with states, often in exchange for agreements to keep out privately-run casinos—such deals exist in California, Florida, Minnesota and Wisconsin—but the amount is much less than states would collect in taxes from private casinos.

Under the Indian Gaming Regulatory Act of 1988, the federal government must approve state-tribe compacts, casino management contracts and tribal gaming ordinances. But that authority applies only to “Class III” gaming, including slot machines, other video and electronic games of chance, craps, roulette and blackjack. The tribes themselves have authority over “Class II” gaming, such as bingo, pull-tabs, lotto and punch boards. The online games that tribes in Oklahoma and California plan to launch involve Class II gambling.

A First in Oklahoma

Oklahoma doesn't allow its residents to gamble online, but under an unusual agreement reached with the state earlier this year, the Cheyenne & Arapaho Tribes will be allowed to target online gamblers from outside the U.S.

Under a first-of-its-kind settlement with Republican Gov. Mary Fallin, the tribes agreed to close an online site called www.pokertribes.com that the state said was illegal. In exchange, Oklahoma will allow the tribes to launch a website that takes bets only from people outside the United States.

The tribes also will give Oklahoma 10 percent of the revenues generated from online card games and up to 6 percent from online bingo, lottery and other games.  It is unclear how much money that will be.

Tribal casinos in Oklahoma generated $3.5 billion in revenues in 2011, second only to those in California. Oklahoma collected $134 million as part of its revenue sharing agreements with the tribes that year, according to the Casino City's Indian Gaming Industry Report.

All Eyes on California

Tribal casinos in California had $6.9 billion in revenues in 2011, 25 percent of the total Indian casino revenues nationwide, according to the Casino City's Indian Gaming Industry Report. From that total, the 60 California tribes gave $387 million to the state and localities, tops in the nation (see list).

The Alturas Indian Rancheria Tribe in Northern California is expected to be the first tribe to formally launch online gaming by the end of the year. The tribe has partnered with a company called Great Luck that has developed a technology open to gamblers anywhere in the country, who could play on their home computers or on mobile devices.

Great Luck, which is headed by Indians from other tribes, unveiled what it called “first tribal online bingo site in the United States” during an event in Las Vegas in September. A primitive version is available now in a “free-play” format, but it expects “real-money” games to start with its deal with the Alturas Indian Rancheria Tribe, via the host site, DesertRoseBingo.com,

Tribes that use this system are banking on VPN-like technology called “Virtual Private Network Assisted Play System” that ensures that bettors are located on reservation property virtually, rather than physically. Once players are registered and approved, they can play games via “proxy play,” in which the system connects wagers to servers located on Indian lands, “thus ensuring that all actual game play is taking place within sovereign Indian lands,” the company said.

The technology will make sure the online player is of legal age and from a state that allows Class II gaming, which most do.

The tribe has talked to state and federal authorities about its plan, said Cruz Bustamante, the former lieutenant governor of California who represents the tribe. He said the tribe hasn't received any kind of official approval, but it hasn't been told to stop.

“Great Luck has assembled a first-rate legal team with extensive experience in Tribal and non-Tribal gaming law, banking, and patent protection,” said Allison Clear Fastowof Blue Engine Media, on behalf of Great Luck. “Our customers can feel confident that they are participating in a legal gaming experience,” she said.

A Wisconsin tribe also is pursuing online gambling and is trying to form an alliance with other tribes.  The Lac du Flambeau Band of Lake Superior Chippewa Indians in October became the first tribe to officially join the Tribal Internet Gaming Alliance, with the aim to “bring Internet gaming to Indian Country” within the framework of federal and state laws.

If three other tribes join, the alliance can set up a gaming commission to license and regulate tribal online gaming. Otherwise, it has no power. More than 50 tribes in 18 states have expressed interest in joining, said Jeffrey Nelson, alliance counsel.