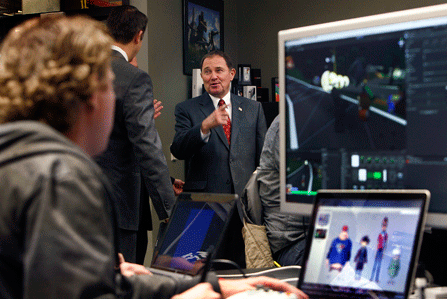 Utah Gov. Gary Herbert released his fiscal year 2015 budget recommendations at Utah Valley in December, which call for more than $260 million in new education spending. State revenues and spending are up across the U.S. this fiscal year. (AP)

The fiscal picture in most states is brighter, with projections of higher revenue and spending growth in fiscal 2014 that started for most states in July, according to the National Association of State Budget Officers. But lingering recession effects and a revenue growth slowdown from fiscal 2013 levels keep the states precariously positioned.

“While the fiscal recovery has been slow, this report shows continued revenue and expenditure growth for most states,” said NASBO Executive Director Scott Pattison. “But growth is modest and fiscal challenges remain.”

Much of the fiscal 2013 gain happened when states got a one-time bump in revenues as some taxpayers maneuvered finances to avoid higher federal tax rates that began Jan. 1, 2013. That is not likely to recur, the report said, due to federal action to get rid of the volatility in federal tax rates.

Pattison speculated that the rapidly growing stock market and recovering economy might boost the small 2014 projected growth slightly higher. “That .8 percent for 2014 is so low that I won't be surprised … that it would be higher than expected,” Pattison said.

The slowdown in revenue growth may mean fewer dollars to spend on health care, higher education or aid to local governments, the survey said.  But the continuing fiscal challenges from the sluggish economic recovery are not expected to cause the same amount of budget volatility that states have been experiencing over the past few years, the report said.

According to NASBO, 43 states enacted higher spending levels in fiscal 2014 over fiscal 2013.  Many states ended fiscal 2013 with a budget surplus.

But it's not all good news. The slowness of the recovery and lingering effects of the recession meant that a number of states have not returned to prerecession spending and revenue levels when adjusted for inflation. Many states are also facing pent-up needs that were not addressed during the down years, including repairs to infrastructure, underfunded pensions and anemic health care spending.

George Naughton, NASBO president and Oregon's chief finance officer, said Tuesday in a conference call with reporters that his state is walking the line between the modest increase in revenues and large budget demands.

“We are having to make some very tough choices,” he said. Some items cut in the recession have been restored, he said, and “we did initiatives in health care and education to make a better investment for the resources we bring in.”

Naughton noted that uncertainty at the federal level around the impact of sequestration and the government shutdown continues to keep states on edge. “In the short term, what they might do about Medicare and Medicaid (is worrisome),” he said.

According to NASBO, fiscal 2014 budgets show aggregate general fund expenditures reaching $721.8 billion, an increase of $26.3 billion or 3.8 percent over fiscal 2013.

Despite budget increases over the last two years, some states enacted fiscal 2014 spending plans below their prerecession peak when inflation is considered, the report said. In addition, state spending in fiscal 2013 for the 50 states combined was still below the fiscal 2008 prerecession peak after accounting for inflation. NASBO noted that inflation has slowed, however, and most states enacted fiscal 2014 budgets with a real spending increase.

Another report from the Rockefeller Institute of Government agreed that many states' earlier robust revenue growth is slowing.

Preliminary July to September 2013 figures from 47 states suggest revenue gains have been softening significantly, the survey said. Overall collections showed growth of 6.1 percent in the third quarter of 2013 compared to the same quarter of 2012, a slowdown from the 9 percent growth of the second quarter of 2013.