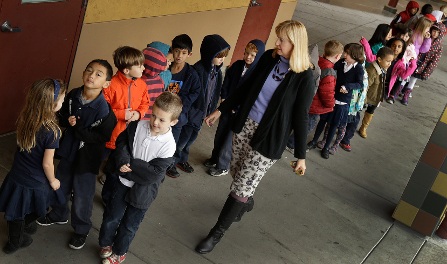 First grade teacher Lynda Jensen walks with her class of 30 children at Willow Glenn Elementary School in San Jose, Calif. The Common Core State Standards have been adopted by 45 states and the District of Columbia. Many parents still don't know what the standards are. (AP)

If you keep hearing about the Common Core but don't know exactly what all the fuss is about (don't worry, you're not alone), Stateline provides some frequently asked questions and answers that should help.

1. What is the Common Core?

The Common Core State Standards set out what students from kindergarten through 12th grade should know in English and math. The standards were created by the nonpartisan Council of Chief State School Officers, which represents the top education officers in each state, and the National Governors Association, along with Achieve, a Washington-based nonprofit working to increase the number of students who graduate from high school ready for college and careers.

The Common Core grew out of a concern that Americans need to improve education to remain competitive in a global economy. In addition, Common Core provides continuity in education for students who move from state to state.

The English and math standards were voluntarily adopted by 45 states and the District of Columbia; Minnesota adopted only the English standards. Chris Minnich, executive director of the Council of Chief State School Officers, said the standards “embody the kind of learning in literacy and mathematics that all of us want for our own children.” Along with the standards, two groups of states are developing standardized tests which will be rolled out in 2014-15.

2. If the states chose to adopt the Common Core, why are people getting so riled up about them now?

In the vast majority of states, the Common Core did not require approval from state lawmakers, which means that in some places, lawmakers, educators, parents and the general public started to learn about the standards fairly recently. According to the National Conference of State Legislatures, in most states, boards of education or comparable state agencies or the chief education officer for the state approved the Common Core. Idaho, Kentucky, Maine and Washington were the only states where the Common Core required direct approval from legislators.

Controversies have since popped up all over the country: Indiana has adopted legislation that “pauses” implementation of the standards, although some teachers are already teaching to the new standards. Michigan is once again moving ahead with the Common Core after some legislative confusion over it. Massachusetts, which is frequently heralded as a leader among the states in education, decided last month to delay a decision about a Common Core assessment until fall 2015, saying that requiring schools to test students on the Common Core that spring, as previously planned, would have been “too precipitous a transition.” And while some states are already using the standards, many states are fully implementing the standards for all grade levels just this year.

3. Was the Common Core mandated by the federal government?

The Common Core is not a mandate of the federal government. In fact, a handful of states (Alaska, Nebraska, Texas and Virginia) have chosen not to adopt the standards. People may be under the impression Common Core is a federal mandate because President Obama supports it, quite vocally. In addition, the federal government poured $438 million of economic stimulus funding into developing standardized tests aligned to the Common Core and has strongly encouraged states to adopt “college- and career-ready standards” in the competitive grant program Race to the Top and through No Child Left Behind, which outlines consequences for schools that do not meet goals.

4. How does Common Core compare with the states' previous standards? And how about other countries' standards?

There are many opinions, of course, but here are some of the most frequently cited:

Andy Porter, dean of the University of Pennsylvania Graduate School of Education, and a team of researchers concluded that the Common Core standards were not a significant improvement over states' previous standards. And when comparing the Common Core with standards in other nations that perform well on international tests, the team found that the Common Core placed more emphasis on higher-order thinking whereas some of the highest-performing countries emphasized more basic skills, such as computation.

William H. Schmidt and Richard T. Houang of Michigan State University, found that the Common Core math standards were very similar to the standards of the highest-achieving nations on one prominent international assessment, Third International Mathematics and Science Study. Their 2012 study also found that on average, states with standards more like the Common Core performed better on the National Assessment of Educational Progress, better known as the nation's report card.

5. Is there evidence that better standards will raise student achievement?

Better standards in and of themselves do not automatically translate into improved student achievement, of course. “To me, the real issue is will these Common Core standards really be implemented?” Porter said. “Why should we think this is the case when that hasn't been the case for state standards that have been around since 2002?” For the Common Core to succeed in raising student achievement, Porter said, curricula must be closely aligned to the standards, as well as teaching materials, student tests and teacher education.

A 2012 study by Tom Loveless of the left-leaning Brookings Institution  argues that the Common Core will likely have “very little impact” on student achievement because state policies have little impact on what goes on in classrooms, which is likely to have a much greater impact on student learning, such as the quality of teaching.

The Foundation for Excellence in Education, which supports the Common Core, offers examples of Common Core English and math standards compared to previous standards. Keep in mind that previously there were 50 different standards so the examples of old standards do not represent every state.

Historically, the United States has been quite resistant to a national curriculum or standards. Although at various times national standards have been advocated by both Republicans and Democrats, enthusiasm for them has never lasted long enough for them to be created and adopted.

In recent memory, a call for national standards began after a commission convened by President Ronald Reagan issued its report “A Nation At Risk” in 1983, which argued that the mediocrity of American education was threatening the nation's economic well-being. But progress was slow; Reagan himself opposed the involvement of the federal government in education. Presidents George H.W. Bush and  Bill Clinton continued to work toward national standards. But by the 1990s, political sentiment appeared to be shifting away from national standards. Since then, governors and states with support from business leaders have taken the lead on developing standards. The Common Core is the closest the U.S. has come to national school standards.

Milgram argues that the creators of the Common Core opted to make the standards less rigorous to get more states to agree to adopt them. “I think the original intent was to raise outcomes, but I think the leaders got tied up in the issue of buy-in,” Milgram said. "I think they made choices that would make it easier for states whose expectations in mathematics were not all that high to buy into Core standards.”

Jason Zimba, a lead author of the Common Core math standards and a founding partner of Student Achievement Partners, a nonprofit organization helping to implement the Common Core, said it is up to the states to determine how much math students should take to graduate. “If you want to go to a typical four-year college, you will have to take at least Algebra II and that is why the standards detail three years of mathematics up to the level of Algebra II,” Zimba said. “On top of that, states should be providing a pathway to calculus for all students able to succeed in that pathway. Just because the standards end at Algebra II, high school mathematics is not meant to end at Algebra II.”

8. Does the Common Core favor “informational texts” over literature?

Sandra Stotsky, who helped develop Massachusetts' well-regarded English standards, has been among the most vocal critics of the Common Core. She said the standards call for a 50-50 split between informational texts and literature.

Pimentel said that's a misreading of the Common Core. The standards specify that by high school, 70 percent of what students read should be informational and 30 percent literature, but the percentages apply across all subject areas, including social studies and science, for example.  Under the Common Core, Pimentel said, a social studies teacher might teach a lesson about the Gettysburg Address focusing on the historical context, while an English teacher might look at the speech examining the style, rhetoric and vocabulary.