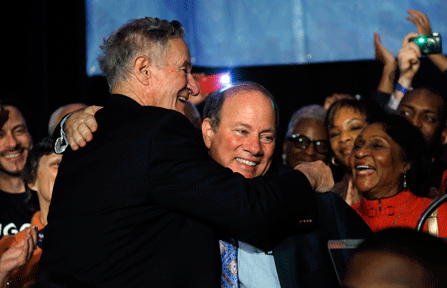 DETROIT— On Jan. 1, Detroit will swear in its first white mayor in 40 years. Usually that would be a significant turn in a city where eight of 10 residents are black. But the milestone will be diminished by the reality that this city is the largest in America where elected officials do not run their own government.

A Washington, D.C. lawyer, Kevyn Orr, is managing the day-to-day operations of the Detroit government for now and into the new year instead of Mayor-elect Mike Duggan and the Detroit City Council. Orr answers to Republican Gov. Rick Snyder, who in March appointed him as an “emergency manager” to steer the city through an unprecedented bankruptcy.

Michigan's election-year intervention in Detroit points up a collateral effect of a state takeover: the loss of control by a government's leaders whom residents elected to deliver their services. Nineteen states have enacted laws allowing the state government to step in and help a financially distressed city, but only a handful are as aggressive as Michigan, which has taken over seven cities and three school districts since 2007.

The perceived trampling of democratic rights often creates tension between the state and city, which disillusions many residents in places such as Detroit. The current mayor, Dave Bing, and five of nine city council members did not seek re-election Nov. 5, when 25 percent of registered voters came out for the municipal election.

“I feel like we have lost our democracy,” said Gail Craig, 57, of Detroit, a General Motors consultant. “I know a lot of people who said they weren't voting in the election because they said it wouldn't matter anyway.”

Darlene Jackson, 58, a Detroit native laid off from a city job, said, “Now that we've elected a mayor, there's no need for an emergency manager.”

Snyder has said the emergency manager will probably be in charge at least until next fall as the city works its way through the bankruptcy, which was filed in July but is awaiting a ruling from a federal judge on whether it can proceed. The city, whose annual general fund budget is about $1.1 billion, has $18 billion in public pension and bond debt.

What role Duggan will play in the coming year will be watched closely in Michigan, where Detroit's future is tied to the state's own efforts to re-invent itself after years of decline.

Under Michigan law, the emergency manager has broad powers to act in place of the mayor and council, but the manager can assign tasks to elected officials if he chooses. Some managers have done that in other Michigan cities, but the law was primarily designed to hold the manager accountable for repairing a city's finances.

Duggan, a former county prosecutor and medical center executive, captured 55 percent of the vote in the nonpartisan election. Coming off that momentum, Duggan has talked to Orr, Snyder and state lawmakers to persuade them to give him a role in city operations. Orr, a bankruptcy lawyer, is a former classmate of Duggan's at the University of Michigan law school.

A Democrat who opposed appointing the emergency manager, Duggan is asking Snyder, a Republican up for re-election next year, to honor the mandate voters gave him to help fix their city. The governor's sometimes frosty relations with Bing and the current council have not improved since the election; city officials said Nov. 13 they were insulted at the state's offer of only $5 million in aid to restructure the government.

Yet Snyder is eager to show progress in resolving the city's crisis before next year's election. “What I'd like to do is have a strong good working relationship with the mayor-elect and see how we can work together,” Snyder said. “I'm very open to having a process where hopefully he can participate in the operations of the city. That's for the emergency manager and him to work out, hopefully.”

Terry Stanton, a spokesman for the state department of treasury, said Snyder is committed to working with Duggan to complete Detroit's comeback. “It would not, however, be prudent to speculate on the specifics of that collaboration at this time,” he said.

Detroit is not the first city in Michigan or elsewhere in which elected officials have clashed with their state overseers. Pontiac's leaders also resisted a state takeover in 2009, and Flint re-elected its mayor in 2011 only to see him replaced with a state-appointed emergency manager. Allen Park unsuccessfully tried to avoid Snyder's emergency manager in 2012, saying it would harm the city's future.

Washington, D.C.'s mayor called Congress' 1995 decision to impose a financial control board on the nation's ailing capital “the rape of democracy.” More recently, a lawyer for the city council of bankrupt Central Falls, R.I. compared the 2011 state takeover to the German occupation of Paris during World War II.

It is not just the loss of local decision-making that local officials resent. The state overseers—a manager, receiver or control board—usually cut budgets, eliminate jobs, reduce or restructure services, trim retirement benefits and raise taxes, none of which is popular.

Yet in city after city, residents opposed to the state takeover often admit it was necessary because their elected leaders would not take the politically difficult actions needed to balance spending and revenues.

"I didn't like the idea of an emergency manager, but it's obvious things wouldn't correct themselves on their own," said Jenise Verde, 48, a Blue Cross analyst in downtown Detroit. "For a long time the people running the city haven't looked at what's going on in the full light of day. At some point, that blows up."

Michigan governors have twice named Joyce Parker an emergency manager in Ecorse (2009) and Allen Park (2012). She said in an interview that she eased the strain from budget and pay cuts in those communities in part through a series of meetings in which she explained the financial challenges the cities faced and the role of the emergency manager in resolving them. Small groups met over coffee; large groups gathered at town meetings.

"The key is educating the public, being transparent and keeping an open-door policy," she said. Did state officials tell her to adopt that tack? "No. I was a city manager over 25 years,” Parker said. “It's common to do it that way to build consensus."

The same transparency contributed to the quick resolution of the Central Falls bankruptcy, which lasted only 13 months, although the effects of budget and pension cuts and tax increases will linger for several years.

"For a bankruptcy to work there's really got to be negotiations," Theodore Orson, the attorney for Central Falls' receiver, said at a recent Bloomberg conference here on municipal finance. Officials leveraged the negotiations, he said, by stating clear goals: the state would not leave Central Falls until there was a plan to balance the budget for five years, and until the public pension and retiree health care systems were sustainable.

Unionized employees and retirees eventually accepted the benefit cuts once they realized the solvency of the pension system was at stake. Orson said, "We had retirees who had been devastated by the cuts come up to us at the end and say, 'Thank you. This is the first time anyone's been honest with us about our pensions. Even though they will be slimmer, at least we know it's going to be there.'"