A handful of states have launched aggressive efforts to thwart so-called “patent trolls” that have bedeviled businesses ranging from giants like Amazon and Facebook to mom-and-pop stores.

Patent trolls are people or companies that buy broadly-worded technology patents, sometimes from firms that go bankrupt, with the intent of suing other companies for illegally infringing on these patents. The trolls hope that the companies will pay to avoid litigation that can cost millions of dollars. Sometimes the trolls create shell companies that make it difficult for the businesses to know who is threatening to sue them.

Patent trolls have targeted the big online players like Google and Yahoo for years, according to the Internet Association, an industry group. More recently, they've gone after grocery stores, restaurants and nonprofits—attractive targets because they generally lack the resources to defend a lengthy lawsuit. (See graphic)

One patent troll sent 8,000 letters to coffee chains, hotels and retailers seeking compensation for offering Wi-Fi to customers, according to a report from the White House. Other trolls have sued, or threatened to sue, restaurants alleging patent infringement for using electronic bar codes on packaging, sending tweets with URLs or using digital menu boards.

The White House estimates that lawsuits from trolls have tripled in the last two years, rising from 29 percent of all infringement suits to 62 percent. In a separate study, Boston University researchers estimated that in 2011, more than 2,100 companies were forced to mount 5,842 defenses in lawsuits from patent trolls, up from 1,401 in 2005, at a cost of $29 billion.

“There's no question that the patent system is broken,” Sorrell said. “I hope Congress takes action.” But Sorrell said any federal legislation should not pre-empt states from using consumer protection laws in the way he has.

President Barack Obama in June signed a series of executive orders aimed at cracking down on trolls and called on Congress to act. Obama described trolls as companies that “essentially leverage and hijack somebody else's idea and see if they can extort some money out of them.”

The average patent litigation costs $6 million, and small businesses typically spend $1.75 million, according to a letter  from a number of trade groups representing the high-tech industry, airlines, hotels, utilities, casinos and restaurants. The co-founders of Twitter and Facebook are among 50 inventors also seeking legislation.

Neither Sorrell nor Bruning has endorsed a particular federal proposal.  But Bruning called improving the patent system “a bipartisan issue that is gaining momentum nationwide,” and expressed optimism that Congress will “close the loopholes in our patent system that allow this abuse.”

The Federal Trade Commission also has stepped up its efforts, and the U.S. Supreme Court will hear two cases this year that might make it easier for those being targeted by trolls to collect attorneys' fees.

But not everyone thinks there is a problem. Gene Quinn, a patent attorney and founder of IPWatchdog, criticizes what he called “the hype and hyperbole associated with the so-called patent troll problem.”

Quinn pointed to recent report from the Government Accountability Office, which found that the number of lawsuits alleging patent infringement increased by about one-third from 2010-2011, after 10 years of fluctuating only slightly.  Instead of blaming trolls, GAO attributed the spike to 2011 patent legislation that limited the number of defendants in a lawsuit. This caused some firms that would have previously filed a single lawsuit to instead break the lawsuit into multiple lawsuits, GAO said.

GAO also found that so-called trolls brought about only one-fifth of patent infringement lawsuits between 2007 and 2011 while companies that make products brought the rest.

Critics, however, argue that patent troll litigation has exploded in the last two years, after GAO's report was finished.

Attorney Bryan Farney of the law firm of Farney Daniels, which represents MPHJ, said companies like MPHJ that buy and sell patents “serve a valuable role in the nation's innovation economy,” including supporting R&D efforts.

He also said that the federal government, not states, is responsible for the country's patent system. “A system where there are 50 different patent laws, which vary by state, would severely disrupt the functioning of the U.S. patent system.” 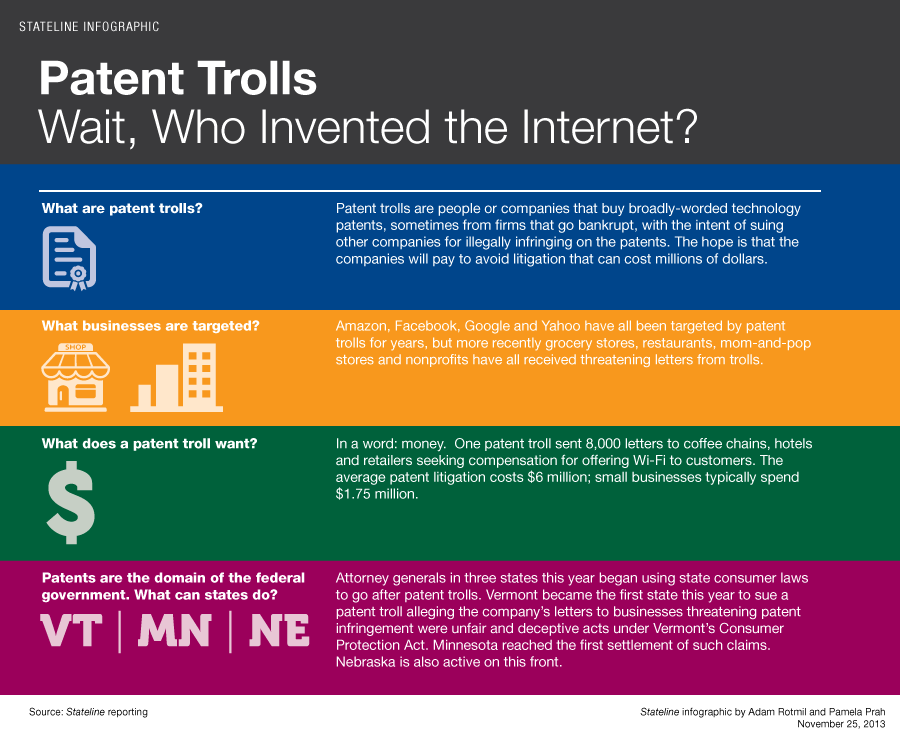